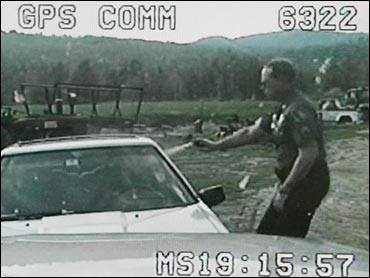 Video taken from Franconia Police Cpl. Bruce McKay's cruiser shows the May 11 confrontation that led to his death and that of the driver he had just stopped, Liko Kenney, a cousin of ski champion Bode Miller. Authorities released it Monday, along with photographs and about 1,000 pages of transcribed statements from witnesses of the May 11 shootings.

A passing motorist trying to protect McKay picked up the gun and killed the driver moments later, but that shooting was not captured on tape.

The video for the first time shows at least part of the incident that has torn the community of Franconia apart, with Kenney supporters describing McKay as a bully cop who was rough with young people and others praising McKay as a fallen hero. The killings — McKay by Kenney, and Kenney by Gregory W. Floyd — have been described by some in town as vigilante justice.

The tape from McKay's cruiser (video)
shows how the sunny day on a country road went wrong.

It starts with the first of two traffic stops on Route 116. McKay pulls over a small car for speeding and having an expired registration. Two heads are visible through the car's rear window. The driver appears to be talking to the officer. Two minutes later the coupe pulls away, followed quickly by McKay's police sport utility vehicle.

About 1.5 miles down the road, McKay overtakes Kenney, crossing the double yellow line, backing up and turning several times until the cars are nose to nose. Kenney reaches out and points, as if asking McKay to back up. A pickup truck behind them has stopped in the road. Kenney backs into a dirt driveway, but McKay doesn't stop. He drives the SUV into the coupe, bumping and pushing it into a gravel parking area backed by farm equipment and fields. Kenney's hands are up now, and the video, mostly silent, blares suddenly with the sound of a siren.

The rest happens quickly. Kenney leans his head and arm out of the window and waves. McKay steps into view in his blue uniform and sunglasses and walks toward the faded blue coupe. He sprays, turns his back and walks out of view of the camera. Kenney leans out again, gun in hand, and rapidly squeezes out seven bullets, hitting McKay four times.

Kenney tries to leave. He drives over McKay's body twice, but doesn't get far. He is shot dead moments later by Floyd, an ex-Marine who picked up McKay's gun.

In a summary report, prosecutors said McKay, 48, was justified in using non-deadly force on Kenney, 24, partly because of a violent confrontation between the two men four years earlier. The attorney general also said Floyd was justified in shooting Kenney as he tried to protect McKay.

"All of the actions by Corporal McKay constituted a reasonable use of nondeadly physical force by a law enforcement officer," the report said.

Also, "Liko Kenney's use of deadly physical force against Corporal McKay was not justified," the report said.

Kenney and Caleb Macaulay were headed back to Kenney's place from work when they saw the police SUV approach from the opposite direction. Macaulay said Kenney was not speeding, but the officer turned around and came up behind them with his lights and siren on.

Macaulay said Kenney was upset and asked to deal with another officer instead of McKay. Kenney's relatives said he had that agreement with police; Attorney General Kelly Ayotte said that wasn't practical or reasonable.

Kenney and McKay had met four years earlier, in a confrontation that ended with Kenney being taken down by McKay and two other officers. Kenney eventually pleaded guilty to assaulting McKay and resisting arrest, though relatives insisted Kenney was beaten by McKay. The bad blood had continued ever since.

As recently as April, McKay urged fellow officers to beware of Kenney, in a memo describing him as armed and having "potential for volatility."

For his part, relatives and friends said Kenney lived in fear of McKay.

Macaulay said his friend tensed up during the traffic stop.

I've never seen Liko really scared like that before," Macaulay said in a police interview.

Kenney said he wanted to drive home to the family tennis camp in Easton, about three miles away on Route 116, where there would be witnesses. Macaulay said Kenney drove away, but again was not speeding.

At the second stop, it was chaos once McKay pushed them off the road. Macaulay said Kenney was shouting "stop stop stop."

McKay walked up and sprayed them without a word. Maccaulay said he was blinded by the pepper spray and didn't see Kenney pull the gun, but heard the shots.

"There was no communication. There is gunfire ... and that was it, that was the whole thing," he said.

"I heard the gun, I saw him with the gun and then I was pretty much like in panic mode, duck, hide, save your own life," Macaulay said.

Witness Susan Thompson looked out her dining room window when she heard the sirens. She watched the SUV push the car off the road, then heard a several pops and saw McKay, clutching his chest, cross the road.

Floyd's son, also named Gregory, said he and his father were driving home to Easton when they saw the police car and a car they had seen earlier outside a market. They watched the wounded McKay run across the road and the car drive onto him once, and then again.

He said the driver was shooting the gun above the car's roof at one point, reminding him of a gangster movie.

Floyd said he saw his father approach the car and tell the driver not to reload; then he watched as his father fired and the driver's head fell to one side.

Witness accounts differ here. Floyd said he heard his father speak to the driver. Floyd Sr. told police he said, "Stop. Put it down or you're going to die," then fired when Kenney ignored him. Macaulay said he did not hear Floyd speak before shooting.

Police said Floyd hit Kenney twice, in the chest and in the neck.