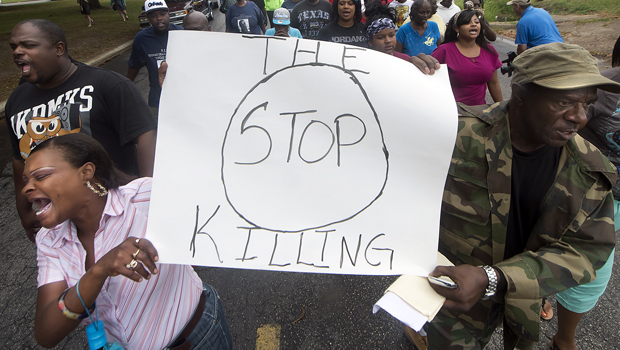 When Texas police officer Stephen Stem shot and killed a 93-year-old woman Tuesday, it wasn't the first time he'd drawn his weapon - to fatal result - in the less than two years he has been on the force in Hearne, a small city about 120 miles northwest of Houston. Now, officials are considering whether he should remain on the force.

Stem was at Pearlie Golden's residence investigating a report of a woman with a gun when the Tuesday shooting occurred. According to a statement from the Hearne Police Department (HPD), Golden "brandished a weapon" and then Stem fired "multiple shots wounding Golden." She later died at the hospital.

Golden's nephew, Roy Jones, told CBS affiliate KBTX that his aunt had failed her driving test earlier that day and when he wouldn't give her the keys to the car, she became angry and got a .38 caliber revolver. Jones told the station that he called police and that Golden fired two shots into the ground after police arrived.

Robertson County District Attorney Cody Seigert told CBS News' Crimesider that police found a .38 revolver on the scene but he could not confirm or deny whether Golden had fired the gun, which has been sent to a state lab for testing.

According to Jessica Vega, the communications manager for the HPD, Stem's first day on the job was July 22, 2012. In December of that year, he shot and killed 28-year-old Tederalle Satchell after responding to a call about people shooting guns from inside a vehicle in the parking lot of an apartment complex.

Vega told Crimesider that the Texas Rangers investigated the Satchell shooting but a grand jury declined to indict Stem and no disciplinary action was taken.

Stem is on paid administrative leave while the Texas Rangers investigate Golden's death, and the Hearne City Council is scheduled to discuss whether to discipline or fire Stem at a meeting tomorrow afternoon. The Associated Press reports that Hearne Mayor Ruben Gomez said he will recommend Stem be dismissed.

According to Vega, two fatal shootings in less than two years is definitely an anomaly for the 12-member force.

"People are in law enforcement for 50 years and never even have one," she said.