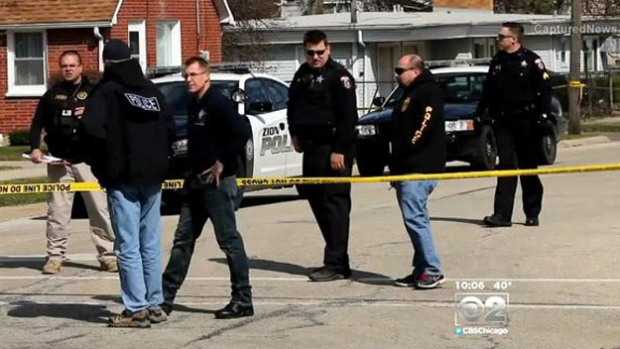 ZION, Ill. -- Zion police say a 17-year-old suspect fatally shot by an officer over the weekend was in possession of a handgun he had just wrestled away from another person, authorities said Monday.

Justus Howell, 17, was shot by officers Saturday afternoon. The Lake County Coroner's Office said in a statement Monday that one bullet struck Howell in the left back penetrating his heart, spleen and liver. Another bullet struck him on the right side of his back. Tests to determine whether drugs were in the victim's system are pending.

Family members have indicated they think Howell was unarmed and wrongly shot by police. But police say the subsequent arrest of an 18-year-old suspect sheds light on the circumstances, according to CBS Chicago.

According to Zion police, the shooting unfolded when Lake County, Ill., Sheriffs arrested Tramond Peet, 18, on a traffic violation. Police saw that he was in possession of a handgun magazine. While in custody, Peet told authorities that he met Howell to sell him a firearm, but Howell tried to take the gun without paying for it.

When the two struggled over the gun, a round was discharged and soon squad cars began to approach. Officers began to chase Howell, and Peet said he heard them giving him orders. Afterward, gunshots rang out and Peet fled.

Police say officers responding to a call about an altercation began chasing a male when he ran from the scene. They say that after the teen was shot, officers recovered a handgun.

Emergency responders transported Howell to a hospital where he was pronounced dead, according to a statement from the Zion police department.

Peet is being held on $15,000 bond for two counts of aggravated unlawful use of a weapon, police said.

The Zion police chief didn't return calls Monday seeking comment about the autopsy results. Zion is a community of about 24,000 people along Lake Michigan about 45 miles north of Chicago, near Illinois' border with Wisconsin.

A statement from the Zion police spokesman Steve Dumyahn says the officer is a 32-year-old, nine-year veteran of the police force. He has been placed on paid administrative leave and his name has not been released.

Police have withheld any statements on the shooting itself because an autopsy report has not yet been sent to the department or the Lake County Major Crimes Task Force. "Until that official report is completed, it is impossible to accurately comment on any of the pathologist's findings," the statement said.

Howell was black and his relatives contacted the NAACP asking its officials to speak on their behalf, according to Lake County NAACP president Jennifer Witherspoon. She says Howell's relatives are hoping to find out exactly what happened as quickly as possible.

"Whether it was a mistake on his part or a mistake on the police's part, they want answers to make sure something like this never happens again," she said.

After a community meeting George Mitchell, State Conference President for the NAACP told CBS News correspondent Ryan Corsaro that he hopes he public waits for the police investigation to be completed without drawing any conclusions.

"I know that is a difficult thing to do because there is a lack of trust between particularly the African American community and police agencies," said Mitchell. "So we want to not let that guide the reaction of the community. More or less, wait for the facts."

The teen's death comes months after an unarmed black 18-year-old was shot and killed by a white police officer in Ferguson, Missouri, an incident that sparked protests and heightened concerns about how minorities are treated by police around country. Police in Zion haven't provided any details on the officer involved in Howell's shooting, including the officer's race.

"Here in America we are seeing this with too many brown and black boys," said Witherspoon, who added she was encouraged that Zion police quickly handed the investigation over to the Lake County Major Crime Task Force.

Family members gathered Sunday near the site of the shooting to pay tribute to Howell.

Howell, was a high school junior who transferred from a school in Wisconsin to Waukegan Public School District 60, spokesman Nick Alajakis told the Chicago Tribune.

Alajakis said the teenager attended the Lakeshore Academy, a privately-operated school that takes students from the district and, according to the district's website, serves academically struggling students.