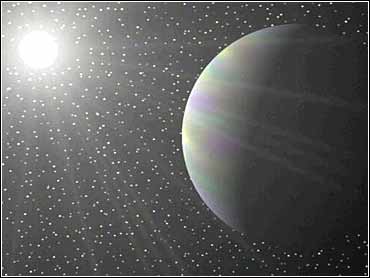 For generations, physicists believed there is nothing faster than light moving through a vacuum -- a speed of 186,000 miles per second.

But in an experiment in Princeton, N.J., physicists sent a pulse of laser light through cesium vapor so quickly that it left the chamber before it had even finished entering.

The pulse traveled 310 times the distance it would have covered if the chamber had contained a vacuum.

Researchers say it is the most convincing demonstration yet that the speed of light -- supposedly an ironclad rule of nature -- can be pushed beyond known boundaries, at least under certain laboratory circumstances.

"This effect cannot be used to send information back in time," said Lijun Wang, a researcher with the private NEC Institute. "However, our experiment does show that the generally held misconception that 'nothing can travel faster than the speed of light' is wrong."

The results of the work by Wang, Alexander Kuzmich and Arthur Dogariu were published in Thursday's issue of the journal Nature.

The achievement has no practical application right now, but experiments like this have generated considerable excitement in the small international community of theoretical and optical physicists.

"This is a breakthrough in the sense that people have thought that was impossible," said Raymond Chiao, a physicist at the University of California at Berkeley who was not involved in the work. Chiao has performed similar experiments using electric fields.

In the latest experiment, researchers at NEC developed a device that fired a laser pulse into a glass chamber filled with a vapor of cesium atoms. The researchers say the device is sort of a light amplifier that can push the pulse ahead.

Previously, experiments have been done in which light also appeared to achieve such so-called superluminal speeds, but the light was distorted, raising doubts as to whether scientists had really accomplished such a feat.

The laser pulse in the NEC experiment exits the chamber with almost exactly the same shape, but with less intensity, Wang said.

The pulse may look like a straight beam but actually behaves like waves of light particles. The light can leave the chamber before it has finished entering because the cesium atoms change the properties of the light, allowing it to exit more quickly than in a vacuum.

The leading edge of the light pulse has all the information needed to produce the pulse on the other end of the chamber, so the entire pulse does not need to reach the chamber for it to exit the other side.

The experiment produces an almost identical light pulse that exits the chamber and travels about 60 feet before the main part of the laser pulse finishes entering the chamber, Wang said.

Wang said the effect is possible only because light has no mass; the same thig cannot be done with physical objects.

The Princeton experiment and others like it test the limits of the theory of relativity that Albert Einstein developed nearly a century ago.

According to the special theory of relativity, the speed of particles of light in a vacuum, such as outer space, is the only absolute measurement in the universe. The speed of everything else -- rockets or inchworms -- is relative to the observer, Einstein and others explained.

In everyday circumstances, an object cannot travel faster than light.

The Princeton experiment and others change these circumstances by using devices such as the cesium chamber rather than a vacuum.

Ultimately, the work may contribute to the development of faster computers that carry information in light particles.

Not everyone agrees on the implications of the NEC experiment.

Aephraim Steinberg, a physicist at the University of Toronto, said the light particles coming out of the cesium chamber may not have been the same ones that entered, so he questions whether the speed of light was broken.

Still, the work is important, he said: "The interesting thing is how did they manage to produce light that looks exactly like something that didn't get there yet?"