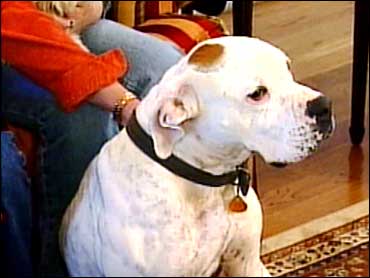 It's a tale of lost and found: Bullet, an American pit bull, headed for the highway Saturday, Jan. 3, because he was spooked by the firecrackers going off in the neighbor's yard.

He ended up in Waynesboro, Pa., more than 500 miles from his home in Gaston, S.C.

"When we came home from dinner, we realized he wasn't home," says owner Robin Newton in an interview on The Early Show as she explained how the dog disappeared. "But we weren't that concerned because he'll go visit some neighbors."

The next day, Robin and her husband George Newton began to worry about Bullet's whereabouts.

Robin Newton says, "We did not know where he could be. We didn't know if he was with someone safe or if he was hurt."

By Tuesday, the Newtons finally got news about Bullet. Since the 7-year-old mixed American pit bull had a rabies tag on, his vet was able to track him down.

George Newton says, "That was the good news. The bad news was he was in Waynesboro, Pa." Bullet was found at the Antietam Humane Society.

Because the cost of the trip to get Bullet was expensive, George Newton explains, he looked for another way to get his dog back.

He says, "I'm in the trucking business, so I called a few customers to see if we had a truck up that way to bring him home. I called J.C. and his wife, Fran. They had a truck in Hagerstown, but they missed him by about 15 or 20 minutes. So J.C. said, 'Well, I'm not doing anything the next couple of days. I'll go get him.' "

J.C. Langston says, "George has done a lot, bent over backwards for us in the past few years and it was just the thing to do, a friend's a friend."

Langston brought Bullet back to his home, safe and sound, on Thursday night. Bullet ran around the yard a couple of times and then went to bed. But not before he ate a big steak dinner.

The Newtons, who live on a 60-acre property three miles from Interstate 29, believe Bullet, scared by the fireworks, ran to the highway.

"The funny thing is that George and I were coming down the Interstate about that same time. We passed the dog coming down the road. We're sure of it," Robin Newton says. They also believe Bullet got a ride for part of his journey.

"Someone called our vet Saturday night with his description," Robin says, "and said that they had him, but they didn't leave a name or number. So we think since they couldn't get in touch with anyone that they just went on to Pennsylvania with him."