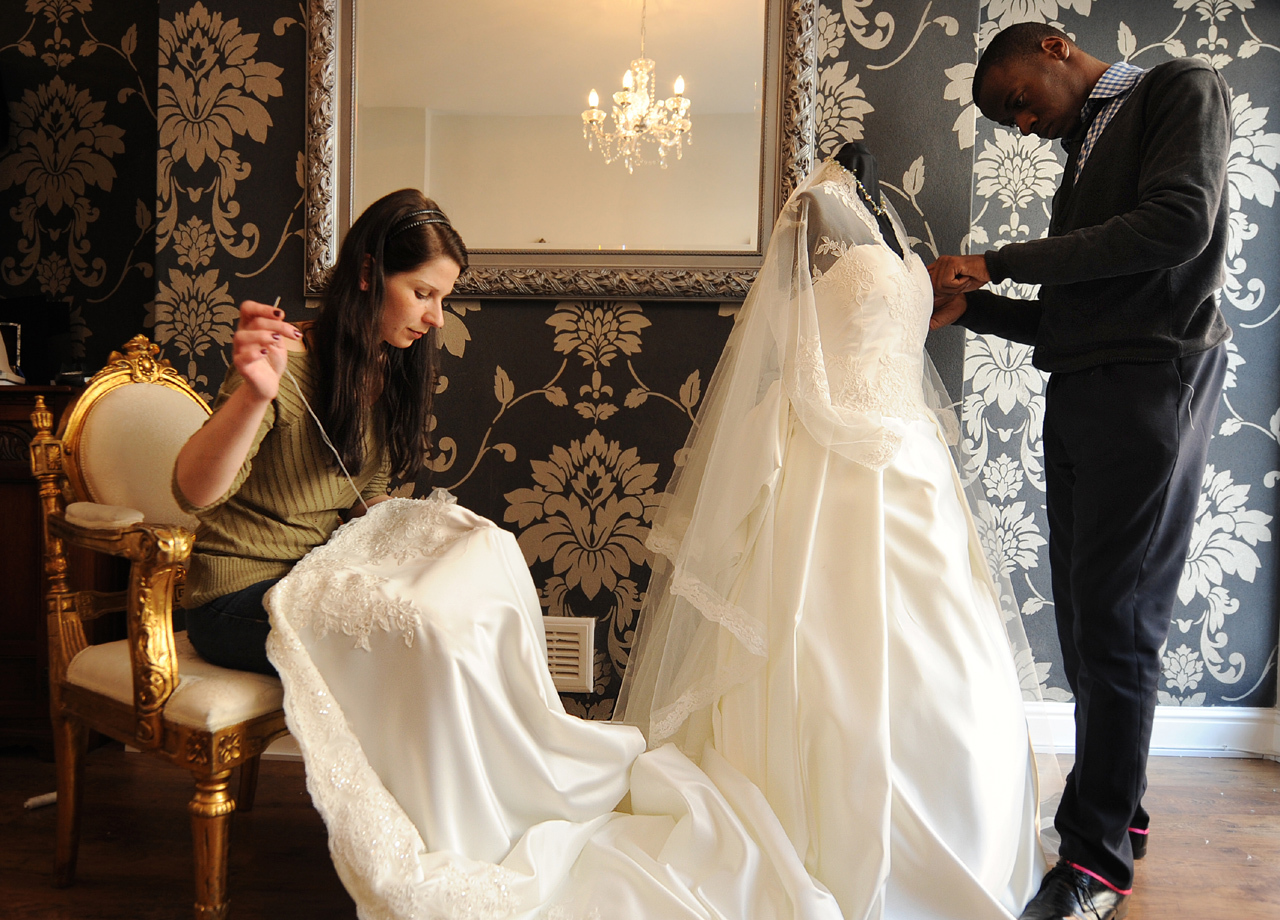 Fashion firms want a piece of the fairy tale.

Seconds after Kate Middleton emerged from her car outside Westminster Abbey in a ball gown with lace sleeves, designers around the country, glued to their TV sets, were sketching her look, setting in motion a mad rush for mass-produced versions that are expected to be in stores as early as late June.

For brides-to-be who can't wait even four weeks, David's Bridal, the nation's largest bridal chain, was already trumpeting a strapless look from Oleg Cassini, paired with a lacey bolero jacket, on its website as an already available stand-in as it scrambled to push out modified knockoffs of the real thing to stores by September.

Meanwhile, QVC said shoppers will be able to pre-order earrings inspired by the diamond drops worn by the princess as early as Monday night. The piece, which will sell for under $50 and was created by Kenneth Jay Lane, will be available to shoppers in two months.

Middleton, now the Duchess of Cambridge, didn't break new fashion trends on Friday, but fashion experts say her elegant understated look, which featured a V-neck intricate lace bodice, is expected to bring back a new era of classic wedding dressing that was just starting to re-emerge in designers' collections.

In particular, her dress should spur a demand for lacy sleeves in all special-occasion wear and reverse the sexy strapless gowns that have been popular for several years. Many experts say that the princess' gown, designed by Sarah Burton of Alexander McQueen's fashion house, even paid homage to what Grace Kelly wore on her wedding day to the Prince of Monaco more than 50 years ago.

More importantly, fashion industry experts like Brian Beitler, chief marketing officer of David's Bridal, believe Middleton could re-energize the wedding industry, which has been hurt by the Great Recession as shoppers focused more on expense-cutting and less on the fairy tale.

"I thought it was going to be over the top, but it was more about simplicity and elegance," said Allen Schwartz, co-owner of A.B.S., which is known for pumping out copies of celebrity dresses. "This is Grace Kelly revisited. This is iconic. She will have a huge impact in fashion. She will be the new 'It' girl."

Schwartz, who started sketching as soon as the gown was revealed on TV, said his team arrived at 5:30 a.m. at his Los Angeles showroom, ready to cut the pattern. He unveiled the gown at a charity gala on Friday night and on Saturday, one of his A.B.S stores in the area was expected to have a sample on display for customers. The gowns, which will be produced in local factories, should be in department stores by late June.

"Every bride wants to look like her," said Shala Moradi, lead designer for family-owned Faviana, a special occasion and wedding dress design company based in New York. "This is going to be the No. 1 dress for the bridal line."

Faviana is expected to finish a prototype by Monday and will either send the sample to one of its factories in China or have it made domestically. The company's version will be in stores within the next eight to 10 weeks. Already, she said, a number of department stores have been calling about when they would receive shipments.

Pumping out celebrity-inspired dresses isn't new for companies like A.B.S., David's Bridal or Faviana. They're used to producing similar versions on tight deadlines of dresses spotlighted at the Oscars or the Emmys. But many say the pressure is much more intense given the enormous interest in the princess and her influence on fashion so far.

Hat companies like Serendipity Tiara have credited Middleton for helping to popularize the fascinator, a feathered hat worn perched on the side of the head. QVC reported it has sold 54,000 units of an affordable copy of Middleton's sapphire ring since her engagement last November. It's priced at just under $40.

Technology has helped speed up the design process. Peter Brown, vice chairman of retail consulting firm Kurt Salmon, says it takes only about 12 hours from design to prototype because everything is digitized and people can communicate through email. Thirty years ago, when companies rushed to copy Princess Diana's dress, it took a couple of weeks.

Designers can also instantaneously pull up photos of Middleton's dress on their iPads, enabling them to get a closer look of the details. That's how Moradi's son Omid, who is also a principal of Faviana, was able to see the details of the gown's Chantilly lace. By 9:30 a.m. Friday, the team was at a local lace supplier buying similar lace.

Fashion companies interviewed said they're not exactly copying every detail of Middleton's gown, but taking elements of the design to make it more wearable - and of course more affordable.

Clearly, Middleton's dress, which had a 9-foot-train, compared to the late Princess Diana's 25-footer, is more easily interpreted for the masses. Moderate-priced fashion companies are using polyester-based satin instead of the more expensive Duchess satin. But for the rest of the details, each company has a different take, though they are embracing the overall silhouette and the long lace sleeves.

Shala Moradi said she would cut the train down to 3 feet and have no lace on the skirt to control the price. She will also modify the bustle in the back to slenderize the bride. The gown is expected to sell for anywhere from $1,500 to $2,000.

David's Bridal's design director Dan Rentillo said that the train would be trimmed some 2 feet to about 86 inches, and it won't feature as much lace on the skirt of the gown. The dress will be priced for under $1,000, he said. A.B.S.' Schwartz said that his version of the gown would have a mermaid train of about 4 feet. He's also trimming the bustle in the back.

"I'm cleaning it up," Schwartz said, "and putting my own spin."

(Above: Catherine Middleton waves to the crowds as her sister and Maid of Honor Pippa Middleton holds her dress before walking into Westminster Abbey, April 29, 2011 in London, England.)