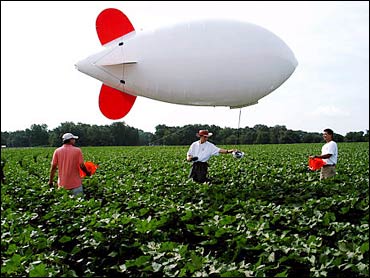 The 15-foot blimp hanging over a south Georgia cotton field may look like a used-car promotion.

But beneath the white bag of helium there's some serious science going on - research that could mean improved cotton yields, better quality and higher profits for Southern cotton growers.

University of Georgia researchers are using the blimp to conduct a long-term study to detect drought stress in cotton plants before the plants start wilting.

"If we can fly a drone over Iraq and spy on whoever, why can't we fly a blimp over our cotton fields?" said Craig Bednarz, a cotton physiologist with the university.

Dangling from the blimp is a square, plastic container holding two digital cameras, one modified to take infrared images. The cameras, both pointed downward, are fired from the ground with radio signals from a remote control.

Healthy plants appear white in the infrared images, while sick or drought-stressed plants show up in shades of red.

"When you walk in a field, you see only a small portion (of the crop)," said researcher Glen Ritchie, one of two graduate students working on the project. "When a plant wilts, it has stopped growing. There's no photosynthesis. With this, we can see the whole field and we'll be able to spot problems before the plants wilt."

The research is being done at the university's 130-acre C.M. Stripling Irrigation Research Park, which has more than 200 sensors buried at depths of 6, 12 and 24 inches. They report soil-moisture conditions every 15 minutes, and the colors in the images are correlated with the moisture readings provided by the sensors.

Scientists are fine-tuning the moisture requirements of various crops at the park, including corn, cotton and watermelons. Its irrigation systems supply varying amounts of water to different parts of a field, based on need - something conventional systems can't do.

The effort began last year using a long stick to lift the cameras over the field. This year, researchers are using a 6 1/2-foot-wide blimp from Southern Balloon Works Inc. in Deland, Fla. It soars to about 300 feet while two of the researchers guide it across the field with strings. A third holds the remote control and snaps images.

"We want to try to develop a better method for scheduling irrigation," Bednarz said. "We have a scientific basis for applying insecticides, herbicides and pesticides, but we don't have any scientific way to schedule irrigation."

The problem of poorly scheduled irrigation cost Georgia cotton growers an estimated 300 pounds of cotton per acre - a loss of $80 million statewide - during a 2002 drought, according to crop experts.

Some farmers have turned to satellite imagery and aerial photos for moisture information, but delays in getting that data prevent growers from responding rapidly enough for maximum yields and quality, Bednarz said.

Researchers hope technology developed during the blimp work will speed up the process. If it does, they want to make the technology available to farmers.

The solution may be locally based crop-dusting planes equipped with cameras, since they already fly over fields to spray chemicals.

"We don't think there will be blimps over every farm," he said.