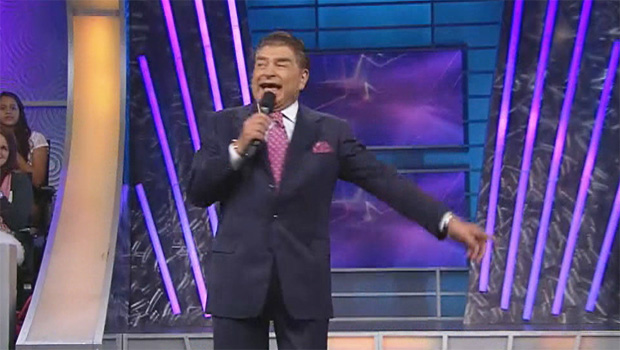 "Sábado Gigante" is a Spanish language TV phenomenon that has entertained audiences for decades, both in Latin America and here in the United States. This morning, Mo Rocca will show us:

If you like acrobats, animal acts, beautiful dancing girls, Zumba exhibitions, game show contests, talk show tears, and pretty much anything else under sun, "Sábado Gigante" is the show for you. It's a variety show on steroids

"Sábado Gigante" (Spanish for Gigantic Saturday) airs every Saturday for three hours, and is watched by millions of people in the U.S. and in 40 countries around the world.

Fans wait in lines for hours in the Miami heat to be in the audience of this legendary broadcast. One woman drove four hours to attend. Big fan? "Yeah, we've been watching it since we were in diapers!" she laughed.

And the main reason for its gigante success? Don Francisco, the impresario, pitchman and ringleader of the "Sábado" circus. He's been hosting the show for 53 years (that's a world record).

In all that time, he's missed only one Saturday, when his mother died in 1974. There's never even been a rerun.

Rocca asked, "Who taught you to work so hard?"

"They were German Jews," he said. "And they fled during the Second World War, during the Holocaust, to Chile. Not because they choose Chile. That was the only option that they had.

"I was a kid in the middle of the war -- even in my country, in Chile, half of the population, they were with the Germans. It was not easy to grow up in an environment like this."

To make friends he'd have to be more like, well, a TV host. "I found an opportunity making jokes, doing shows for the school. And I was soon accepted by the majority."

But it wasn't the New York fashions that turned his head; it was that new-fangled contraption in his hotel room: The television. "When I put it on, I was amazed. That was a radio that you [were] able to see and to listen at the same time. That was my first contact with television. I said to myself, 'My father's wrong; I'm learning something that is before yesterday; this will be the future.'"

So, Rocca asked, "When did you go to the bathroom?"

"During the commercials. I was fast at that time, when I went to the bathroom!"

In 1986 Univision, the network that airs "Sábado Gigante," moved the show's production to Miami, the gateway to Latin America. And the show itself became a gateway to a mass Latin audience for future superstars like Shakira, Enrique Iglesias, even U.S. presidents -- all of them courting an audience that's muy importante.

This son of German immigrants may be the most recognizable face in all of Latin America. Just take a walk with Don Francisco through Miami's Bayside Market, where he is mobbed by fans from many countries, and you'll get a sense of how far his reach extends.

One woman from Cuba asked Francisco why he was leaving "Sábado Gigante." He replied, "I'm getting old."

"You are not old!" she retorted. "Don't leave the program!"

"Sábado Gigante" is ending its run next Saturday. Over the last few seasons the show's ratings with younger viewers have fallen precipitously.

Still, as Rocca found out as a recent guest on the program, it's hard not to get caught up in the excitement of the loud, brash, flamboyant "Sábado Gigante":

Others have been called the King of Entertainment, but none has matched the reign of Don Francisco.