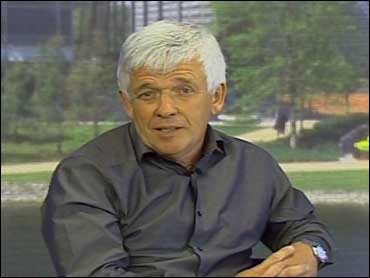 Exactly ten years after Tony Blair swept to power as Prime Minister of Britain, it is all over. He has now told the world that next week he will formally announce that he is quitting. And when he goes, his party and most of the voters here will heave a sigh of relief.

But how has he fallen so low in the public esteem? We have had ten years of steady economic growth, the government has poured money into schools and hospitals, and he has finally brought the warring parties of Northern Ireland together. His last act of office will be to go to Belfast and give his official blessing to a power sharing deal between the Protestants and the Catholics which is perhaps his greatest achievement.

So why is he so unpopular? To be frank, it is because of you, and in particular because of President Bush and the war in Iraq. When Tony Blair won power, Bill Clinton, his ideological soul mate, was in office. They stood shoulder to shoulder. And when the Republicans took over and George Bush moved into the White House, Bill Clinton told Tony Blair -- stay close to the new President.

Tony Blair took that advice. They might not have shared the same political beliefs but they shared just about everything else. They even shared the same toothpaste. It was said that the two men prayed together. They stood together after 9/11. And together, they took their nations into war in Iraq.

Tony Blair did it because he thought it was right. But he and his advisors knew how the British public would react. George Bush had never been a popular figure in this country. The war in Iraq, the catalogue of death which each day still makes its way into the media, has corroded and finally destroyed 'Teflon Tony'. The people judged him, probably harshly, to be Bush's poodle -- an American stooge - and now he has paid the price.

Tony Blair leaves office undefeated by the voters, as of course did Lady Thatcher. It was their nervous parties that pulled the plug. She will be remembered for the war she won in the Falklands -- but he will always be remembered not for the victory in Iraq, but for its cost.
By Peter Allen