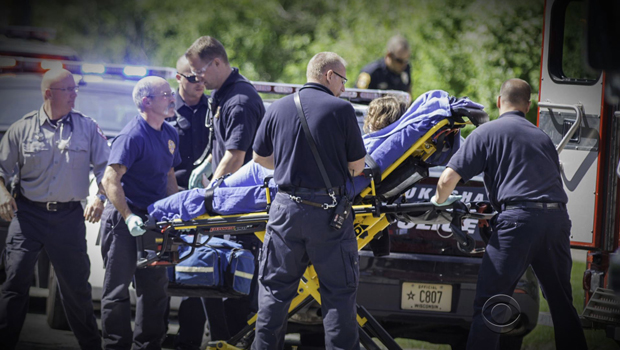 MILWAUKEE - A 12-year-old girl who authorities say was stabbed 19 times by two classmates trying to please a fictional character is making steady physical and emotional progress, and she recently enjoyed a movie date with her father, her family said Tuesday.

The southeastern Wisconsin girl, who was stabbed in the legs, arms and torso, can walk but her movement is limited by breathing problems, said family spokesman Steve Lyons. He did not provide a long-term prognosis at the family's request, but voiced optimism that she will make a full recovery.

Court documents say two 12-year-old classmates stabbed the girl in a plan to curry favor with "Slenderman," a character in horror stories they had read online. The girls told investigators they believed Slenderman had a mansion in a Wisconsin forest and they planned to live with him after earning his approval by killing their classmate.

They lured the victim to a wooded park in Waukesha, Wis., on May 31. One told investigators she told the victim to lie down and be quiet after the stabbing so she wouldn't lose blood as quickly, but the suspect said she actually wanted the girl to be silent so she would die without drawing attention to them.

Once the attackers left, the victim crawled to a road, where a bicyclist found her. Doctors later told police the girl narrowly escaped death because the knife came within a millimeter of piercing a major artery near her heart. She was released from a hospital about two weeks ago.

The family said in a statement that the girl is on a "miraculous road to recovery" and adjusting to the "new normal." The family has safeguarded the girl's name and asked friends not to identify her.

"She has a courageous heart and bravely deals with both the physical and emotional challenges since the attack," the family said.

She felt strong enough recently to go see a Disney movie with her father, Lyons said.

The two suspects are charged in adult court with attempted homicide. The accused girls are not being named because their cases could end up in juvenile court.

Supporters from around the world have donated nearly $50,000 to help with medical bills, along with gifts, care packages and purple hearts - the girl's favorite color, Lyons said.

"The family is just overwhelmed by the outpouring of support," he said. "We in Wisconsin talk about Midwestern values, but this really goes across the nation, and even around the world."