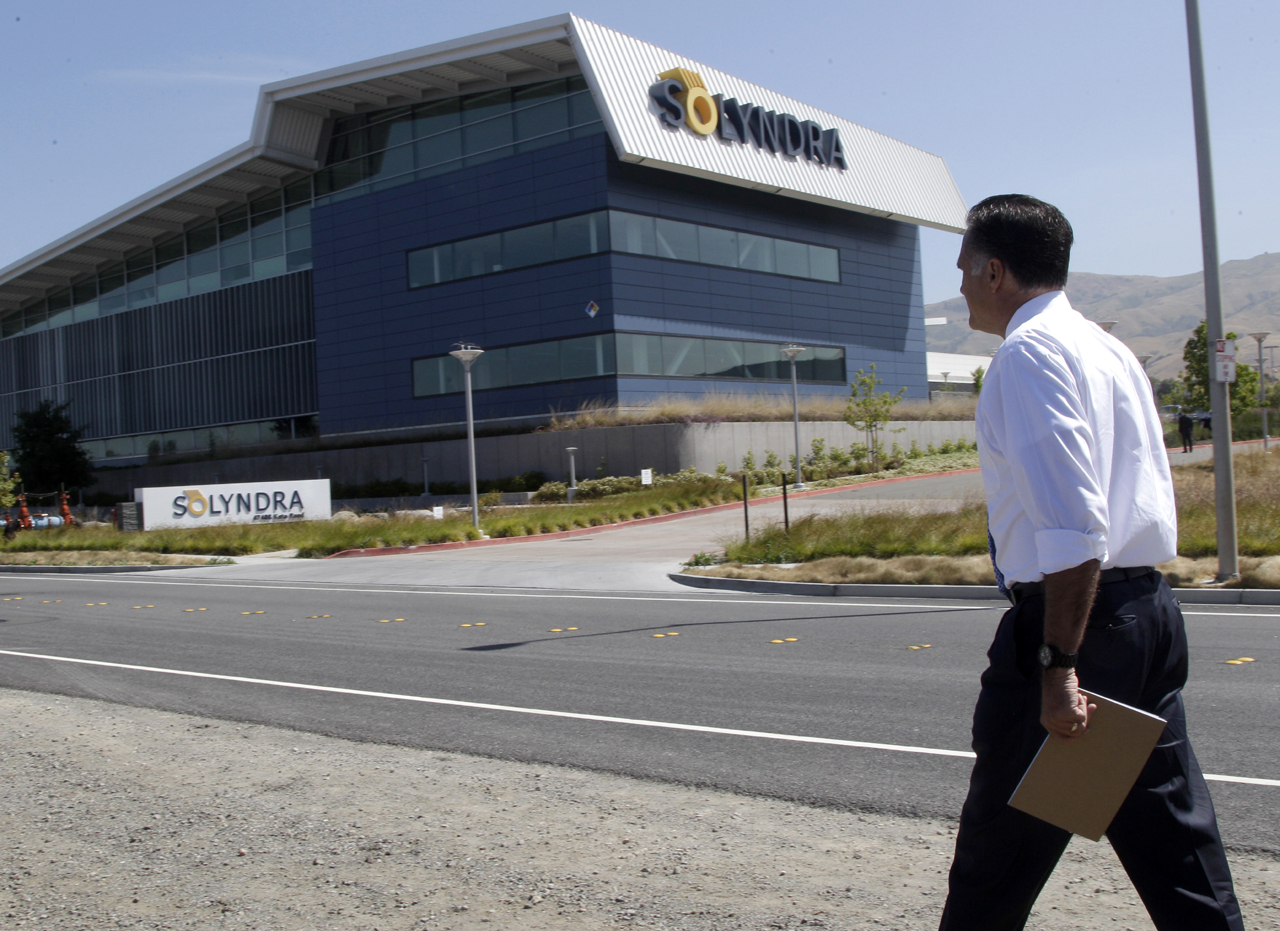 (AP) WASHINGTON - Republican presidential contender Mitt Romney has revived charges about the failed solar company Solyndra as he assails President Barack Obama' green energy policy. But he didn't get the story completely straight when he accused the administration of favoring "cronies."

Solyndra, the first renewable energy company to receive a federal loan under the 2009 stimulus law, went bankrupt last year and laid off its 1,100 workers, leaving taxpayers on the hook for more than $500 million.

The company's implosion and revelations that Obama administration officials rushed to complete the loan in time for a September 2009 groundbreaking have become an embarrassment for President Obama and a rallying cry for GOP critics of his green energy program.

On Thursday, Romney stood outside the company's former headquarters in California to decry Solyndra as Exhibit A of presidential missteps on the economy.

A look at some of Romney's assertions and how they compare with the facts:

ROMNEY: "An independent inspector general looked at this investment (Solyndra) and concluded that the administration had steered money to friends and family — to campaign contributors."

THE FACTS: There is no proof — and it appears unlikely — that Energy Department Inspector General Gregory Friedman was talking about Solyndra when he testified in March 2011 about stimulus contracts. Friedman said his office was investigating whether such contracts were steered to friends and family, presumably of government officials in charge of spending stimulus money. Romney cited a Newsweek article that referred to Friedman's testimony.

But Friedman did not say that such claims had been proved, and there is no evidence he was including Solyndra in his comments. The testimony came nearly six months before the company declared bankruptcy. And there is no evidence that family members of top federal officials received any favors. Friedman's office is among several federal agencies that are investigating Solyndra.

ROMNEY: "President Obama was here to tout this building and this business (Solyndra) as a symbol of the success of his stimulus. It's a symbol not of success but of failure. It's also a symbol of a serious conflict of interest (and) how the president thinks about free enterprise. Free enterprise to the president means taking money from the taxpayers and giving it freely to his friends."

THE FACTS: So far, there is no indication of White House interference with the energy loan process. There is no question, though, that campaign contributors have ties to Solyndra and other energy companies that have received federal money. Romney appeared to be referring to possible political influence wielded by two major Obama campaign donors with ties to Solyndra.

The Energy Department hired Steve Spinner, a former sports fitness executive, to help monitor the loan guarantee program that benefitted Solyndra. Emails released to Congress show Spinner was actively involved in the Solyndra loan, despite pledging to step aside because his wife's law firm represented the company. Spinner, who left the Energy Department in 2010, was a major contributor to Obama's 2008 campaign and is again raising money for the president's re-election.

George Kaiser, an Oklahoma billionaire, invested $400 million in Solyndra through an investment vehicle connected to his family foundation. Kaiser was a "bundler" for Mr. Obama's 2008 campaign, raising between $50,000 and $100,000 for the president, records show. He also was a frequent White House visitor in 2009 and 2010.

Kaiser has said he played no part in helping Solyndra win the 2009 loan, but emails to Congress show he discussed Solyndra with the White House on at least one occasion. Kaiser also directed business associates on how to approach the White House and Energy Department to help Solyndra deal with its financial problems.

ROMNEY: "If the business failed, as it did, it's the taxpayers that get stuck with losing a half a billion dollars. So it's heads and his cronies win, and tails and the taxpayers lose."

THE FACTS: Romney is right that taxpayers are on the hook for the $528 million loan to Solyndra and other losses from the loan guarantee program. But the Obama administration said such losses were expected when Congress created the high-risk program, which is intended to boost cutting-edge projects that would have trouble obtaining private financing.

An independent review indicates that the government could lose nearly $3 billion on green energy loans — just under one-third of the $10 billion Congress set aside.

The review did not involve Solyndra or Beacon Power Corp., a Massachusetts energy storage company that also went bankrupt after receiving a federal loan. The government has lost $567 million from those two loans so far, although officials say they could recover as much as $28 million from the sale of Beacon to a private equity firm.

But he said the "vast majority" of companies that received loans are still expected to pay them back in full, with interest.