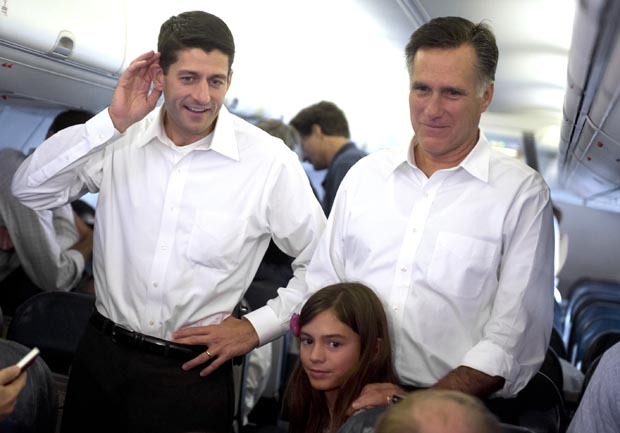 (AP) WASHINGTON - In his debut as Mitt Romney's running mate, Paul Ryan promised "America's comeback team" won't duck tough budget issues, although the man standing next to him has kept his head low so far. Romney vowed the duo would "preserve" Medicare, an eye-popping claim considering Ryan wants to transform the program from the ground up.

Not all the rhetoric fit neatly with reality or with the record when Romney introduced his Republican vice presidential choice to the nation Saturday. A look at some of the claims by the Wisconsin congressman and Romney, and how they compare with the facts.

ROMNEY: "Unlike the current president, who has cut Medicare funding by $700 billion, we will preserve and protect Medicare and Social Security and keep them there for future generations."

THE FACTS: You could fill an arena with all the details left out in this statement. Ryan's reputation as a fiscal conservative is built on a budget plan that would overhaul the Medicare program and introduce a voucher-like plan that future retirees could use to buy private health insurance. Whether that results in a better or worse situation for Medicare recipients is a matter of debate. But under Ryan's plan, traditional Medicare would no longer be the health insurance mainstay, just one of many competing options.

The nonpartisan Congressional Budget Office estimates the Ryan plan — which Romney endorsed in broad strokes in the past — would slow the increases in money for seniors. A typical 66-year-old would receive about 35 percent more than last year — $7,400 in 2011 dollars. Under current law, that person would probably receive at least 56 percent more in 2030, and quite possibly 75 percent more — $9,600 in 2011 dollars. The CBO said his plan grows spending for Medicare enrollees "at a much slower rate" than under current law or other policy scenarios. In Washington, a slower increase in spending is tantamount to a spending cut.

Romney's assertion that the team would preserve Social Security left out the fact that he proposes significant change. He would protect the status quo for people 55 and over but, for the next generations of retirees, raise the retirement age for full benefits by one or two years and reduce inflation increases in benefits for wealthier recipients. At least with this program, he has offered more specifics than President Barack Obama has in dealing with the entitlement's long-term financing shortfall, though neither has laid out a comprehensive solution.

As for his accusation that the president cut Medicare, Obama's health care law does cut billions from the Medicare Advantage program, hospitals and nursing homes, to pay for expanded insurance coverage.

RYAN on Romney: "As governor of Massachusetts, he worked with Democrats and Republicans to balance budgets with no tax increases, lower unemployment, increase income and improve people's lives."

THE FACTS: For a Massachusetts governor, balancing a budget is a requirement of state law.

Ryan's claim that Romney didn't raise taxes to comply with Massachusetts' yearly balanced budget requirement is also misleading. While Romney didn't raise state income or sales taxes, he worked with the state's Democratic-controlled legislature to raise hundreds of millions of dollars through new or raised fees on marriage licenses, gun licenses and much more. Romney also closed what he called business tax "loopholes," raising between $350 million and $375 million annually for three years. Many in the Massachusetts business community said they saw the maneuver as a tax increase by a different name.

And while Romney himself didn't raise income taxes, he benefited from a huge $1.1 billion tax hike passed by Democrats the year before he took office. It was responsible for roughly half of the deficit Romney helped cut in his first year in office.

ROMNEY: "We offer solutions that are bold, specific, and achievable."

RYAN: "The commitment Mitt Romney and I make to you is this: We won't duck the tough issues, we will lead."

THE FACTS: So far, vital specifics are missing from Romney as he pledges broad cuts in federal spending, but more money for the armed forces, and significant tax cuts. He proposes to cap federal spending at 20 percent of gross domestic product by the end of a first term, an ambitious goal that is not fleshed out with the painful choices that will be necessary for that to happen.

If current Social Security and Medicare beneficiaries are protected, domestic Cabinet agency budgets would have to take a hit in ways that could reshape government to its core. Health research, transportation, homeland security, education, food inspection, housing and heating subsidies for the poor, food aid for pregnant women, grants to local governments and national parks are among the programs that would be at risk of substantial cuts.

Romney promises to cut a wide swath of spending by 5 percent immediately, but independent analysts say the cuts would have to be far deeper to meet budget goals and would be certain to meet stiff resistance in Congress.

RYAN on Obama: "And in his first two years, with his party in complete control of Washington, he passed nearly every item on his agenda, but that didn't make things better. "

THE FACTS: Obama succeeded in achieving a stimulus plan, the automakers' bailout, his health care law, new rules in the financial services sector and more. But he had failures, too, a promised immigration overhaul and climate change legislation among them. Ryan's assertion that the Obama agenda "didn't make things better" is primarily a political judgment call. But no one seriously argues that the stimulus plan or the auto bailout made no difference at all. The question is whether such spending was worth the gains that were made.

Obama's $800 billion-plus stimulus, enacted in February 2009, created both public-sector and private-sector jobs, even if not as many as its sponsors had hoped. The director of the Congressional Budget Office, Douglas Elmendorf, estimated that the stimulus saved or created more than 3 million jobs. Princeton University economist Alan Blinder and Mark Zandi, chief economist at Moody's Analytics, estimated that the stimulus, together with the bank bailout started by President George W. Bush and continued by Obama, saved or created more than 10 million jobs. An earlier CBO analysis estimated that stimulus trimmed the unemployment rate by 0.7 to 1.8 percentage points.

ROMNEY on Ryan- "And throughout his legislative career he's shown the ability to work with members of both parties to find common ground on some of the hardest issues confronting the American people."

THE FACTS: Not exactly. Ryan enjoyed a reputation as a consistent, if occasionally plucky, conservative before Obama took office in 2008. Ryan was known for occasionally bucking his party on social issues and foreign policy. In 2007, for example, he voted with Democrats for a bill prohibiting discrimination on the basis of sexual orientation. He has also enjoyed a lifelong friendship with former liberal Democratic Sen. Russ Feingold, whose father worked in the same office as Ryan's father in Janesville, Wis.

But particularly since Obama's election, Ryan's been something of a no-compromise-congressman: He's emerged as a leading intellectual force in the conservative opposition to Obama, joined unanimous blocks of Republicans in opposing Obama's biggest pieces of legislation and given little ground in negotiations over the budget and the deficit. Budget blueprints he released in 2011 and 2012 as House Budget Committee chairman were viewed as anathema to rank-and-file Democrats because of their cuts to social programs, not as carrots designed to get bipartisan consensus. In 2011, he criticized the work of a bipartisan group of senators, known as the Gang of Six, who were working on a budget compromise of their own.

Ryan did work with Democratic Sen. Ron Wyden of Oregon in 2011, on a proposal for changes to Medicare that would allow private plans to compete with Medicare. But Wyden was the only prominent Democrat to support that plan and, in the end, Wyden himself did not support Ryan's larger budget plans, which included the Medicare component, when they were released later in 2012.

RYAN: "I'm proud to stand with a man who understands what it takes to foster job creation in our economy, someone who knows from experience, that if you have a small business — you did build that."

THE FACTS: Ryan, like Romney and scores of Republicans in recent weeks, has used comments Obama made at July 13 campaign appearance in Virginia against him. But the rhetorical jab takes Obama out of context. Republicans have seized on only part of Obama's quote — "If you've got a business, you didn't build that" — but the full quote makes clear Obama is talking about the conditions that help businesses and individuals succeed, such as teachers and infrastructure.

The more complete quote from Obama: "If you were successful, somebody along the line gave you some help. There was a great teacher somewhere in your life. Somebody helped to create this unbelievable American system that we have that allowed you to thrive. Somebody invested in roads and bridges. If you've got a business — you didn't build that. Somebody else made that happen. The Internet didn't get invented on its own. Government research created the Internet so that all the companies could make money off the Internet."