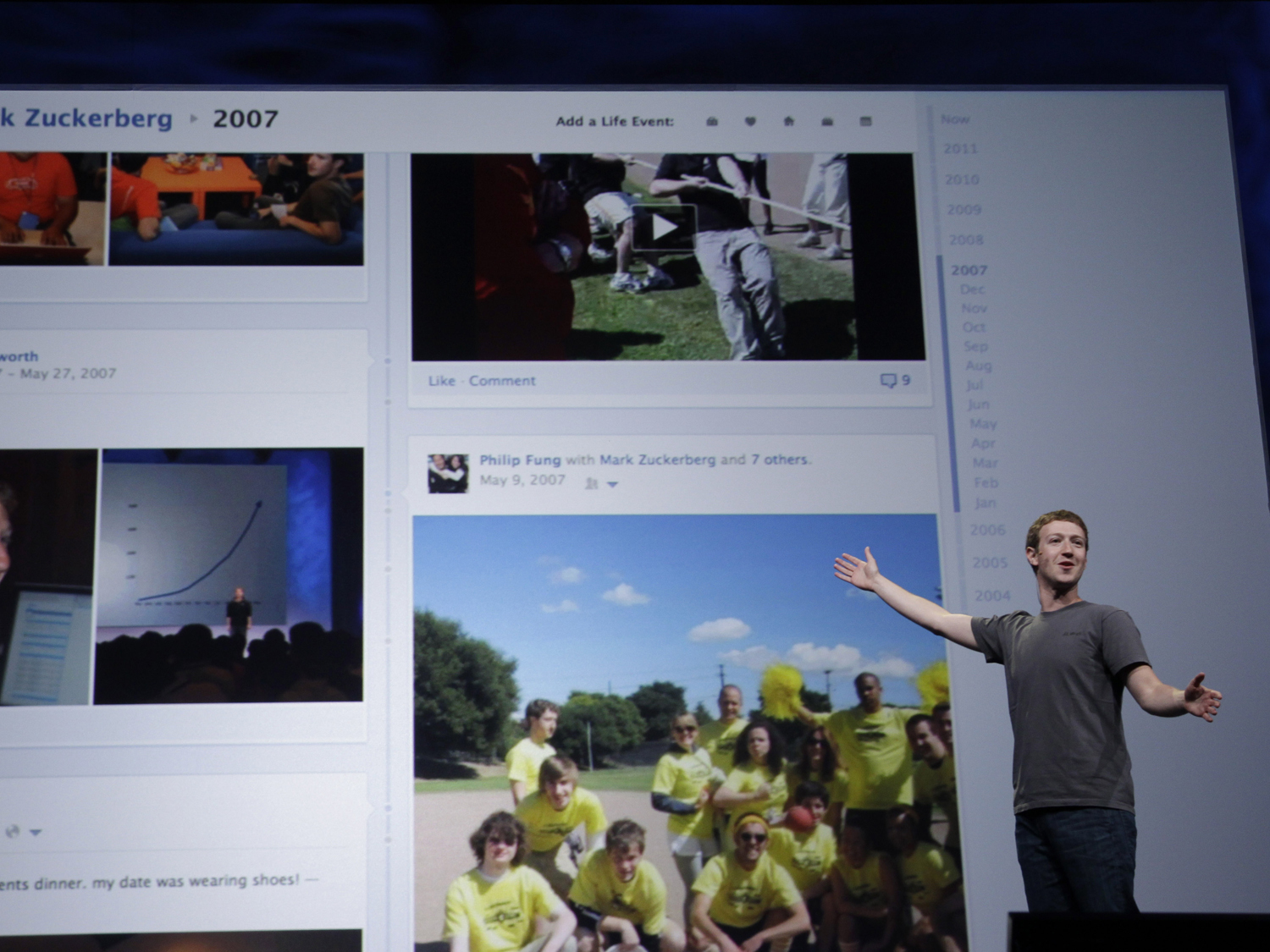 SAN FRANCISCO - Facebook is dramatically redesigning its users' profile pages to create what CEO Mark Zuckerberg says is a "new way to express who you are."

Zuckerberg introduced the Facebook "timeline" Thursday in San Francisco at the company's f8 conference for some 2,000 entrepreneurs, developers and journalists. The event was also broadcast to more than 100,000 online viewers.

The timeline is reminiscent of an online scrapbook, with the most important photos and text that users have shared on Facebook over the years. It's Facebook's attempt at growing from an online hangout to a homestead, where people express their real selves and merge their online and offline lives. The timeline can go back to include years before Facebook even existed, so users can add photos and events from, say 1995 when they got married or 1970 when they were born.

Zuckerberg took the stage after a humorous skit, in which Saturday Night Live actor Andy Samberg impersonated him. The real Mark Zuckerberg looked considerably more playful and at ease than he has in past events, suggesting he is growing into his role as the public face of Facebook. But he quickly got down to business as he introduced the timeline as "the story of your life - all your stories, all your apps and a new way to express who you are."

CNET: How to sign up for Timeline
Facebook: Tell your story with Timeline
ZDNet: A closer look at the Facebook Timeline and the Open Graph
CNET: Facebook's new version of the "Open Graph"

Timeline is a lot more visual than what Zuckerberg referred to as "the heart of the Facebook experience." All of the old basics are there, but in a drastically different presentation than we've ever seen before. Yes, there's the Wall, which Zuckerberg said is "more nicely designed," as well as visual tiles of core apps (friends, map, likes and photos), and recent activities.

At the core is the namesake of the new layout: the actual timeline. Dating back to 2004 (as well was "way back"), users can scroll instantly (to the point where it made some conference goers a bit dizzy as it scrolled so fast on the big screen) throughout all of their wall posts, photos and more. Basically, the timeline starts with a user's birthday.

This will also be available on mobile devices.

Timeline can be filtered down to one type of content by clicking on filters (a.k.a. Timeline views). The most intriguing and new filter to the profile is the map, which draws on Facebook Place by showing where you've checked-in along with where you lived and worked.

Another new feature is called Reports, which uses a person's apps and takes content to create a summary of what you've been working on elsewhere on Facebook. Of course, this can be broken down by dates too.

Along with the timeline, the most obvious change to Facebook members is going to be the giant "Cover," which acts like a wallpaper of sorts. Essentially, it's a giant image that sits at the top of a person's profile with that user's normal Facebook profile picture layered on top of the image towards the lower left-hand corner.

"Timeline is a completely new aesthetic for Facebook," Zuckerberg proclaimed, positing that each profile will be more distinct from the other than ever before.

Facebook also announced a new version of its Open Graph platform which will let users connect with more than just people, but also offers more opportunities for media and lifestyle apps. The new version of Open Graph means that you "can connect to anything you want in anyway you want," said Zuckerberg, "You don't have to like a book, you can just read a book."

Basically, Facebook is adding verbs to the set of nouns that a person can use to describe something they're sharing. (Now it can say, "Mark is reviewing a restaurant" when using a relevant app action.")

Zuckerberg acknowledged it's simple, but insisted it's going to change how people use apps on Facebook. It actually gets better than that. Facebook is expanding beyond game related apps with two new categories: media (music, movies, TV, news and books) and lifestyle (exercise, food, fashion travel and more).

First, the permissions dialog on apps have been completely rewritten to make users understand that they can update their timelines with actions from an app (or not, if they don't want to see these messages ever again). For example, on the Spotify app, users can update their profiles with what and who they're listening to as well as playlists. But Spotify won't ask you every time, reducing the number of annoying pop-up messages.

Then there's what Zuckerberg described as "real-time serendipity," which was demonstrated by the new news ticker on the Facebook homepage that many users might have seen already as it rolled out this week ahead of f8. Zuckerberg posited that it's a way to help users discover new media content faster.

The last key to the Open Graph update is that users can now find "patterns" in their friend's activity. Basically, you can check out how many times a person decides to listen to a particular Lady Gaga song.

Facebook has been working with a number of partners and developers on the future of Open Graph -- most notably Spotify, which was singled out as the digital music locker's CEO and founder Daniel Ek took the stage.

Ek insisted that music can make Facebook even better, and that the key to cutting music piracy was making access to music free and social. He added that Facebook users on Spotify listen to more music with a larger variety of genres and are twice as likely to pay.

"It's a big day for all of the music lovers around the world," Ek said.

However, he didn't delve into the details of the Spotify app too much, although it confirms months of rumors that there would be some kind of Facebook integration at some point.

But the point of Open Graph now is that Spotify isn't alone. There are plenty more of music related social apps on Facebook, including Rhapsody, Rdio, iHeartRadio and turntable.

Moving on to movies and TV, Netflix CEO Reed Hastings took the stage, fresh off from dealing with criticism over the decision to split the streaming and DVD rental businesses. Netflix is now in 45 countries, and in 44 of them, Facebook integration will be available.

That exception is the United States, which has a privacy law that prohibits this feature. Yet, Hastings remained optimistic, adding that there is a bill in Congress that is aiming to reverse this.

The area where Facebook integration might be valued the most will be the lifestyle apps. Taking Nike+ GPS and Foodspotting as examples, users can share things like how far they've run and what they might be eating and where. Basically, the stuff you might want to show off about, and that process is made much easier.

Apps built with the Open Graph upgrade will be rolling out with Timeline simultaneously, and developers can start working on and posting those apps today.

Contributions from ZDNet and the Associated Press