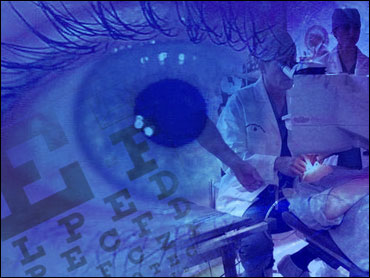 Considering laser surgery to improve your eyesight? New guidelines should help determine if you're a good candidate or might be prone to vision-harming side effects.

One key: The guidelines explain what tests are needed before getting zapped, so if your doctor skips these steps, consider picking another surgeon.

"There is a major need for credible, reliable information," says Dr. Roger Steinert of Harvard Medical School, who co-wrote the guidelines for the American Society of Cataract and Refractive Surgery.

"What we wanted to do with the guidelines was to create an understandable, straightforward and accurate set of informational tools that the patient can use to decide if Lasik is right for them," he told CBS News Correspondent Russ Mitchell on the CBS News Early Show.

"You need to be aware of the complications and the risks," adds John Jeter of Reston, Va., who may have narrowly escaped injury. He was scheduled for surgery by one LASIK center but — nervous because workers repeated his eye test six times before okaying him — got a second opinion from another doctor who said Jeter's cornea was too thin to be zapped safely.

Americans will undergo more than a million LASIK procedures this year to correct blurry eyesight. It's quick and painless: Doctors cut a flap in the cornea, aim a laser underneath it, and with a zap, reshape the cornea for sharper sight.

While the vast majority of patients get better vision, it's not for everybody — a message often lost in the hoopla of ads promising that people can "throw away your glasses" or offering bargain-basement prices for surgery that usually costs more than $1,000 an eye.

Side effects include double vision, glare, halos or starbursts of light. Occasionally, patients actually lose vision, unable to see as well even with glasses or contact lenses after LASIK as they could before. Others are left with painfully dry eyes, despite eye drops.

"It is a serious medical procedure and a patient should be well-informed and only undertake the procedure if they've had good counseling and a good interaction with their eye surgeon," said Steinert.

The Food and Drug Administration, which approved laser surgery, cannot tell consumers just how big those risks are. It's not tracking them. Recent studies estimate 1 percent to 5 percent of patients suffer various side effects, although Steinert says experienced surgeons can have lower rates.

That's a small risk, yet with millions undergoing LASIK, it means thousands may suffer some problem.

The FDA has long offered general LASIK warnings, such as to know the risks and consider treating one eye at a time. The American Academy of Ophthalmology recently concluded LASIK is best for moderate, not severe, vision problems. SurgicalEyes, a group of injured patients, created a Web site that illustrates what it's like to see through various LASIK-caused side effects.

The new guidelines, to be unveiled Tuesday by the surgeons' new Eye Surgery Education Council, offer consumers a different approach — steps to determine if they're good candidates.

A key is knowing what eye tests to get. Among the most important: Finding out if the cornea is too thin or the pupil is too big. Most patients need half their original cornea thickness - at least 250 microns — remaining after surgery, Steinert explains. Avoiding glare and other vision distortions partly depends on the laser-treated area not overlapping a dilated pupil, so doctors must measure pupils in low light.

Side effects aside, you may need multiple LASIK treatments over months, and not everybody gets perfect vision. You're not an appropriate candidate for LASIK if you need a new prescription for glasses every year, or have certain medical conditions that affect vision or surgical healing.

Basic LASIK won't eliminate that middle-age need for reading glasses. Some doctors offer a variation called monovision, where one eye is focused for near vision and the other for far vision. Test this by wearing different-strength contact lenses first, stresses Steinert. While monovision works well for many people, including him, others never get used to it.

"I was willing to invest a little money to hopefully ensure I got a good result," said Rick Robertson of Houston, who spent $250 on two eye exams before undergoing LASIK last year — and has almost perfect vision.