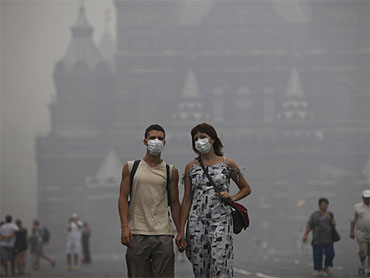 Winston Churchill's famous description of Russia as a riddle wrapped in a mystery, may have had this kind of day in mind.

The smoke is from forest fires that have been raging in the surrounding countryside for over a month in the hottest summer in over a century.

A NASA image from space depicting a cloud-like figure shows the extent. But it's not cloud, it's a smoke plume that spreads for more than a thousand miles.

The heat is more than a Russian problem. It's caused a catastrophic failure of the Russian wheat crop.

Exports have been banned and world grain prices have spiked 20 percent this week, nearly doubling in a month.

But while heat and drought are problems in Russia, too much rain has been the problem in India and Pakistan.

And the summer monsoon in Pakistan has produced the worst flooding in eighty years. At least 1,600 people dead so far. Twelve-million people affected. More than half-a-million houses destroyed.

"People are using mules, people are using carts," says Amir Abdulla, World Food Programme executive director. "Whatever we can find to move food and any other life support assistance, we will do so."

And nature's fury has become political.

The government's often ineffective relief effort has opened the way for workers linked with Islamic Jihadist movements to move in.

Despite American aid, the battle for hearts and minds being fought in these rising waters is not being won by forces friendly to the west, especially when Pakistan's president and U.S. ally, Asif Zardari, has chosen not interrupt a visit to Britain.

The flood surge is now moving downstream toward even more populous areas. And more heavy rains are predicted for the weekend.