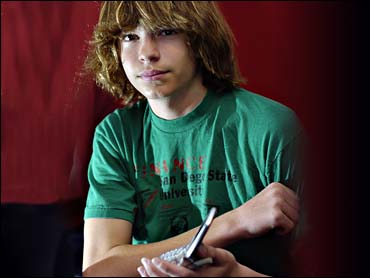 Curtis Sathre said it was like a bomb going off. His 13-year-old son Michael stood stunned, his ears ringing, hand gushing blood and body covered in black ash.

In a split second last August, fragments from Michael's exploding cell phone had hit him between the eyes and lodged in the ceiling of the family's home in Oceanside, Calif.

Over the past two years, federal safety officials have received 83 reports of cell phones exploding or catching fire, usually because of incompatible, faulty or counterfeit batteries or chargers. Burns to the face, neck, leg and hip are among the dozens of injury reports the agency has received.

The Consumer Product Safety Commission is providing tips for cell phone users to avoid such accidents and has stepped up oversight of the wireless industry. There have been three voluntary battery recalls, and the CPSC is working with companies to create better battery standards.

U.S. phone makers and carriers say most fires and explosions are caused by counterfeit batteries and note that in a country with some 170 million cell phone users, the number of accidents is extremely low.

"Is it a problem? It has turned up, you bet. But statistically it is extraordinarily rare," said John Walls, spokesman for the Cellular Telecommunications & Internet Association. "But the fact that it has happened certainly has the industry's attention."

Some consumer advocates say the cause goes beyond bad batteries making their way to the market. They point to the increasing pressure on battery and phone makers to fit more capabilities into small instruments.

"If you're cramming more and more power in a small space, what you're making is a small bomb," said Carl Hilliard, president of the California-based Wireless Consumers Alliance, which has been tracking incidents of cell phone fires and explosions.

Though legitimate batteries can go wrong, there is a greater chance that poorly made, counterfeit ones will lack safety devices to detect overheating or overcharging. The lithium-ion batteries found in most cell phones can overheat if, for example, heat vents are covered.

The CPSC is trying to determine if improved venting is enough by itself to ensure safety. "We have seen temperatures as high as 600 degrees, and you can have a torch-like effect if these batteries don't function properly," Wolfson said.

The commission has announced three battery recalls since January, one from Verizon Wireless and two from Kyocera Wireless Corp. Kyocera's first recall was blamed on a supplier whose standards had slipped. The other recalls were attributed to suppliers bringing counterfeits into distribution chains.

Kyocera, which recalled 1 million batteries last month, said it has changed vendors and doubled efforts to test its own batteries.

Hoping to address problems that may lie beyond their supply lines, members of the wireless industry began collaborating last week with the Institute of Electrical and Electronics Engineers (IEEE), a standard-setting organization, to create voluntary design and performance standards for all batteries.

"There needs to be high-quality batteries for these cell phones. You have a lot of power in a very small product, so it's really key," said Wolfson of the CPSC, which is participating in the meetings between wireless industry members and IEEE.

Carriers and manufacturers also are urging cellular users to exercise reasonable care of batteries, chargers and phones and to purchase them directly from phone companies rather than secondhand dealers or off the Internet.

But even following those recommendations sometimes isn't enough, as bad products inevitably find their way onto store shelves.

Angela Karasek, a 21-year-old paralegal in Philadelphia, bought her Motorola phone and battery together from a Nextel store. She awoke one night a few weeks ago to what she described as a pinging sound and then saw fire. Her cell phone battery had blown out, igniting a doll about three feet away. She ran to her parents' room for help, and her father quickly put out the fire.

"I'm just a light sleeper, and for some reason I sat up and saw all the flames on the doll," Karasek said.

Marcelino Gonzalez of Brentwood, N.Y., said he suffered second-degree burns after his Kyocera phone exploded in his hand as he turned it on to make a call.

"If it was to my face it would have blown up in my face," said Gonzalez, 62, who has contacted a lawyer.

Michael Sathre, who is expected to fully recover from his wounds, was picking his fully charged Verizon LG cell phone off the floor when it exploded by his side. The family chose not to sue and has instead allowed the companies involved and a consumer group to come to their house to study the damage, in the hopes it won't happen to someone else.

"It took my son two months to decide to even be near a cell phone," said his mother, Cris. "But he needs one."

Spacewalk chips away at backlog of station tasks