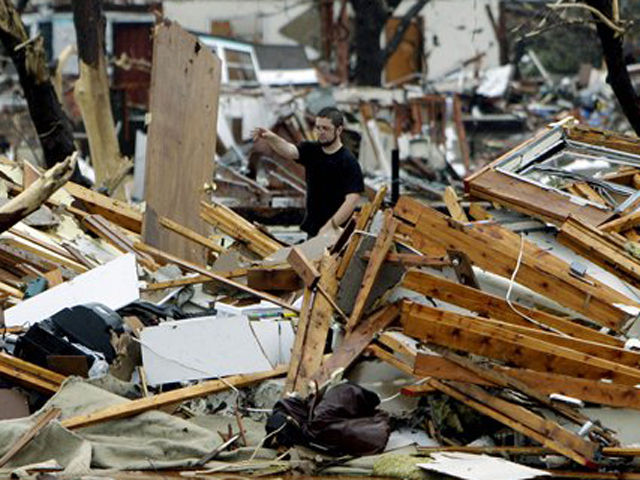 WASHINGTON D.C. - Weather experts said it's unusual for deadly tornadoes to develop a few weeks apart in the U.S. But what made the two storm systems that barreled through a Missouri city and the South within the last month so rare is that tornadoes took direct aim at populated areas.

The tornado that hit Joplin, Mo., on Sunday killed more than 100 people and marked the nation's deadliest single tornado in almost six decades. The series of twisters that swept through the South late last month killed more than 300 people. Both disasters leveled entire communities.

Such a pair of weather events is "unusual but not unknown," said tornado researcher Howard B. Bluestein of the University of Oklahoma. "Sometimes you get a weather pattern in which the ingredients for a tornado are there over a wide area and persist for a long time. That's what we're having this year."

And the threat is continuing, he said, noting more storms are predicted over the next few days.

Other than the death toll, there was nothing too unusual about the Joplin storm, he added. The conditions were right and thunderstorms were forecast.

"This is a situation where the tornado went right through a town. If had been 10 miles away, far fewer people would have been affected," Bluestein said.

Pictures: Joplin, Mo., devastated by tornado
Baby, grandma rode out Joplin tornado in closet
How you can help

Urban sprawl into the countryside has increased the odds that tornadoes will affect more people, said Joshua Wurman, president of the Center for Severe Weather Research in Boulder, Colo. He likened the situation to barrier islands, where more and more homes are being built in areas prone to hurricanes.

Forecasters can't tell very far in advance where the path of destruction is going to be, added Greg Carbin, warning coordination meteorologist for the Storm Prediction Center in Norman, Okla. A lot of tornadoes hit open spaces, so "when you move to major population centers, the death toll can climb."

Carbin also noted that a single tornado hit in Missouri, while several tornadoes swept across six Southern states last month. Experts are reluctant to attribute specific weather events to climate change, and National Weather Service Director Jack Hayes said that was the case with these tornadoes. Determining the cause will require much more research, he said.

Scientists are looking for ways to prevent high death tolls, in part by developing better warnings and getting people to heed them, said Jerry Brotzge, a research scientist at the Center for Analysis & Prediction of Storms at the University of Oklahoma.

A tornado warning could be issued for an entire county while the actual twister may cover only a few miles or less, he said. Plus, people often look outside because "they need some kind of confirmation, they want to see it," Brotzge said, adding that people need to take cover underground.

Joplin residents had about a 20-minute warning, though a powerful rainstorm obscured it from some directions and "they wouldn't have seen it coming," he said. Bluestein added that rain makes it easier to detect by radar, but for spotting, "it's very dangerous because you could be out in front of the storm and not aware of it."

The Southerners had as much as a 24-minute warning, but those storms were too powerful and wide to escape. Entire towns were leveled, from Tuscaloosa, Ala., to Bristol, Va. It was the deadliest tornado outbreak in the U.S. since April 1974.

"The issue we haven't grappled with is how to warn a major urban area," Brotzge said. "We saw that with (Hurricane) Katrina. We saw that with Tuscaloosa. People were warned very well but still had high fatalities."

There is no practical technology to interfere with twisters. Tornadoes have even been known to hit mountains without dissipating, said Thomas W. Schmidlin, a geography professor at Kent State University who studies twisters.

"It's just been a bad year" for storms striking populated areas, Schmidlin said.