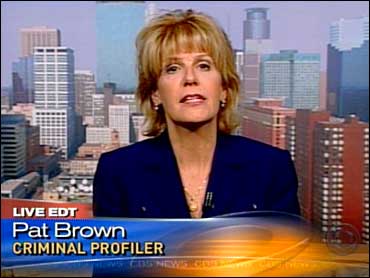 Is it possible to head off stop rampages such as the one at Virginia Tech?

Criminal profiler Pat Brown says it's conceivable – provided people around potential gunmen pay attention to verbal and other signs they tend to send off.

On The Early Show Tuesday, Brown cautioned against profiling, per se, saying, "There is a difficulty in trying to say. 'This particular person is going to commit a crime like this.' However, we do often have a lot of signals that are sent out.

"Like in Columbine. These guys were out there talking about it. There were stockpiles of weapons in the house. Somebody knew something.

"But the problem is, a lot of times, these things are minimized by the people around them. They just say, 'Oh, well, he's just talking crazy,' or, 'It's OK that he actually acts this way.'

"In our society, we've accepted a lot of very bizarre and bad behavior. That violent (tendency) doesn't seem to catch people's attention as much as it should, where people go, 'Whoah – what is he saying?' Kind of like, if you're in an airport and you say, 'I have a bomb in my suitcase,' that will get you nailed right to the floor, right then. But, if you're someplace else and you say that, a lot of times, people just shrug their shoulders and say, 'Oh, yeah, he's talking about guns, he's talking about this, he's talking about that.' Parents ignore it. Their friends just say, 'Oh, well, he's just being weird.' Even teachers sometimes will say, 'He should just talk to a counselor.'

"This is serious. When they start talking about it, we ought to be paying attention."

Asked by co-anchor Julie Chen whether it's possible to profile the Va. Tech shooter, Brown responded, "They're saying these are connected killings, the first event and the second event, that this man was angry. There's a love problem here. He went and shot his ex-girlfriend, and that's what started it all.

"But, a person who shoots that many people … it's not just about his girlfriend. This is a psychopath angry at society; just like the Columbine kids: wants to make his point, wants to have his day in the sun, wants to take out as many people as he can and inflict as much pain as he can on the community. This has been his nature for many, many years. And that's the problem.

"We're not recognizing this violent thinking in these kids who are out there. We're allowing weapons to get into their hands, and I'd like to know where he got these. Where did these things come from that he would have these? I wanna know if he got them off a relative … where these things came from. We need to start doing something about our societal problem. It is a huge problem right now."