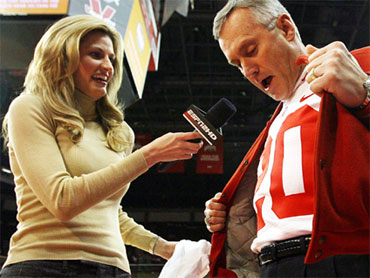 Andrews has vowed to press criminal charges against, and sue the Peeping Tom who posted the video of her -- apparently shot through a hotel room peephole -- on the Internet.

The mystery of who secretly took the video will be solved, investigators say, because of the clues the perpetrator left behind, CBS News correspondent Kelly Wallace reported on "The Early Show" Thursday.

Malkmes said, "I would say it would probably have to be somebody who's close to her, just to get in the area of her."

Several clips of Andrews, along with videos of other unsuspecting women, were posted by someone with the screenname, Goblazers1.

Wallace reported a sports blogger traced the Andrews videos to locations including Montgomery, Ala., and Buffalo, N.Y., using technology that pinpoints where videos are shot.

The horror of this story, according to Abell, is you don't need high-tech gadgetry to spy and record.

Abell cited a typical smartphone, which has a lens the size of a pencil eraser. "You don't need that much of a hole," he said. "That's all it is."