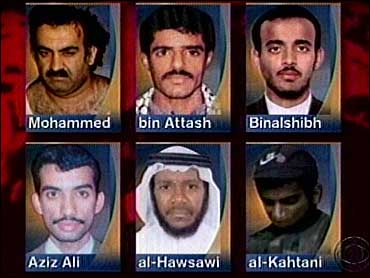 If six suspected terrorists are sentenced to death at Guantanamo Bay for the Sept. 11 attacks, U.S. Army regulations that were quietly amended two years ago open the possibility of execution by lethal injection at the military base in Cuba, experts said Tuesday.

Any executions would probably add to international outrage over Guantanamo, since capital punishment is banned in 130 countries, including the 27-nation European Union.

Conducting the executions on U.S. soil could open the way for the detainees' lawyers to go to U.S. courts to fight the death sentences. But the updated regulations make it possible for the executions to be carried out at Guantanamo.

David Sheldon, an attorney and former member of the U.S. Navy's legal corps, said an execution chamber at Guantanamo would be largely beyond the reach of U.S. courts.

"I think that's the administration's idea, to try to use Guantanamo as a base to not be under the umbrella of the federal district courts," he said. "If one is detained in North Carolina or South Carolina in a Navy brig, one could conceivably file a petition of habeas corpus" to challenge the detention in federal court.

The trial for the six detainees is still months away. And given the slow pace of the military commissions at Guantanamo Bay, verdicts are unlikely before President Bush leaves office next January.

The accused include Khalid Sheikh Mohammed, the alleged mastermind of Sept. 11; Mohammed al-Qahtani, whom officials have labeled the 20th hijacker; and Waleed bin Attash, who investigators say selected and trained some of the 19 hijackers.

"The Pentagon hasn't been able to put a single detainee through a full tribunal process in the six-plus years since 9/11, and until the executive branch answers the judiciary's concerns about due process I don't see these trials happening," said CBS News chief legal analyst Andrew Cohen.

"The problem for the Pentagon is that the fewer rights it gives to people like Mohammmed - like the right to see the evidence against him - the less chance there is that the courts ultimately will sanction the result of any tribunal," Cohen says.

The condemned men could even be buried at Guantanamo. A Muslim section of the cemetery at Guantanamo has been dedicated by an Islamic cultural adviser, said Bruce Lloyd, spokesman for the Guantanamo Naval Station. Among those buried elsewhere at the cemetery are U.S. servicemen.

"A small area of the cemetery has been fenced off and remains ready for the burial of any Muslim who may die here and not be repatriated to another country, for whatever reason," Lloyd told The Associated Press.

When two Saudis and a Yemeni committed suicide at Guantanamo in 2006, military officers said the men could be buried at the cemetery, but their remains were instead sent back to their homelands.

Until recently, it was understood that military regulations required executions to be carried out by lethal injection at Fort Leavenworth in Kansas, experts on military law said.

But in January 2006, the U.S. Army changed its procedures for military executions, allowing "other locations" to be used. The new regulations say that only the president can approve an execution and that the secretary of the Army will authorize the location.

"Military executions will be by lethal injection," the regulations state.

The last U.S. military execution was in 1961, when President John F. Kennedy signed off on the hanging of Army Pfc. John A. Bennett for the rape and attempted murder of an 11-year-old Austrian girl.

Brig. Gen. Thomas W. Hartmann refused to discuss details on executions when he announced Monday that the Pentagon was charging the six Guantanamo detainees and seeking the death penalty.

"We are a long way from determining the details of the death penalty, and when that time comes ... we will follow the law at that time and the procedures that are in place," Hartmann said.

Eugene Fidell, a Washington defense attorney and expert on military law, said Guantanamo Bay could be an execution site, but added that the U.S. would face an international outcry.

"It would be highly controversial because a lot of the world simply doesn't believe in the death penalty any more," Fidell said.

The Bush administration has instructed U.S. diplomats abroad to defend its decision to seek the death penalty for the six men by recalling the executions of Nazi war criminals after World War II.

A four-page cable sent to U.S. embassies and obtained Tuesday by The Associated Press says that execution as punishment for extreme violations of the laws of war is internationally accepted.

The cable points to the 1945-46 Nuremberg war crimes trials in Germany. Twelve of Adolf Hitler's senior aides were sentenced to death at the trials, though not all were executed in the end.

No death chamber is known to exist at Guantanamo, but Scott Silliman, a former U.S. Air Force lawyer who is now a Duke University professor, said the military may decide to build one there. The 2006 Army regulations also call for a viewing room to the death chamber, where at least two news media representatives would be witnesses.

Many support the use of the death penalty for men blamed for the Sept. 11 attacks.

"If these guys are found guilty, I can't think of any other case more appropriate for the death penalty," said Charles "Cully" Stimson, a senior legal fellow at the Heritage Foundation, a conservative think tank in Washington. "An overwhelming majority of Americans support the death penalty."

Michael Khambatta of the International Committee of the Red Cross said his organization would approve the death penalty only when there are "procedural and judicial guarantees that meet international standards."

Khambatta, who is the deputy head of the ICRC's Washington delegation, declined to comment publicly on whether the ICRC considers the U.S. war-crimes trials fair.