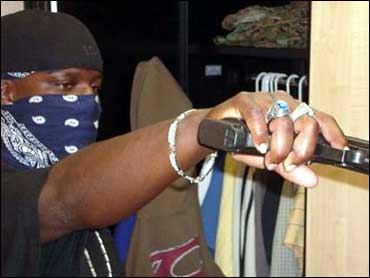 U.S. Army Sgt. Juwan Johnson got a hero's welcome while home on leave in June of 2004.

"Not only did I love my son - but my god - I liked the man he was becoming," his mother, Stephanie Cockrell, remembers.

But that trip home was the last time his family saw him alive.

When Johnson died, he wasn't in a war zone, he was in Germany.

"He had finished his term in Iraq," his mother said. "I talked to him the day before his death. He said, 'Mom, I'm in the process of discharging out. I'll be out in two weeks'."

On July 3, 2005, Sgt. Johnson went to a park not far from his base in Germany to be initiated into the 'Gangster Disciples,' a notorious Chicago-based street gang. He was beaten by eight other soldiers in a "jump-in" - an initiation rite common to many gangs.

Johnson died that night from his injuries. His son, Juwan Jr., was born five months later.

"I feel like I didn't prepare him enough to deal with this and I should have," his mother said. "But how would I have known there were gangs in the military? I could have had that talk with him."

Evidence of gang culture and gang activity in the military is increasing so much an FBI report calls it "a threat to law enforcement and national security." The signs are chilling: Marines in gang attire on Parris Island; paratroopers flashing gang hand signs at a nightclub near Ft. Bragg; infantrymen showing-off gang tattoos at Ft. Hood.

"It's obvious that many of these people do not give up their gang affiliations," said Hunter Glass, a retired police detective in Fayetteville, North Carolina, the home of Ft. Bragg and the 82nd Airborne. He monitors gang activity at the base and across the military.

"If we weren't in the middle of fighting a war, yes, I think the military would have a lot more control over this issue," Glass said. "But with a war going on, I think it's very difficult to do."

Gang activity clues are appearing in Iraq and Afghanistan, too. Gang graffiti is sprayed on blast walls – even on Humvees. Kilroy – the doodle made famous by U.S. soldiers in World War II – is here, but so is the star emblem of the Gangster Disciples.

The soldier who took photos if the graffiti told CBS News that he's been warned he's as good as dead if he ever returns to Iraq.

"We represent America – our demographics are the same – so the same problems that America contends with we often times contend with," said Colonel Gene Smith of the Army's Office of the Provost Marshal.

The U.S. Army Criminal Investigation Command reported 61 gang investigations and incidents last year, compared to just 9 in 2004. But army officials point out less than 1 percent of all its criminal investigations are gang related.

"We must remember that there are a million people in the army community," Smith said, "And these small numbers are not reflective of a tremendous, pervasive, rampant problem."

The rise in gang activity coincides with the increase in recruits with records. Since 2003, 125,000 recruits with criminal histories have been granted what are known as "moral waivers" for felonies including robbery and assault.

A hidden-camera investigation by CBS Denver station KCNC found one military recruiter was quick to offer the waiver option even when asked, "Does it matter that i was in a gang or anything?" That is well within military regulations.

"You may have had some gang activity in your past and everything ... OK ... but that in itself does not disqualify...," the recruiter said.

Military regulations disqualify members of hate groups from enlisting, but there is no specific ban on members of street gangs. Sgt. Juwan Johnson's family says such a prohibition is long overdue.

This month a military court sentenced two of Juwan Johnson's attackers to prison.

Part two of this CBS News investigation looks at police warnings that gangs in the military are branching out to the streets of America.