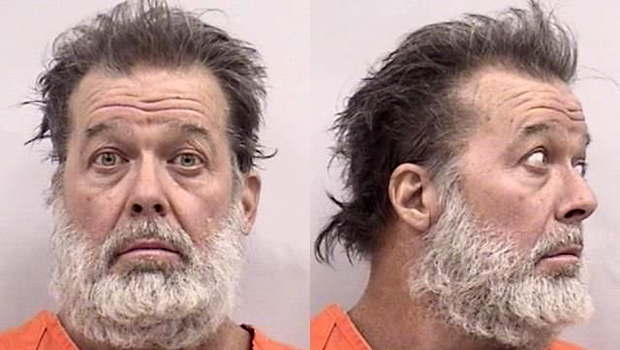 COLORADO SPRINGS, Colo. -- An ex-wife of the man charged with killing three people at a Colorado Planned Parenthood said on Tuesday that he has targeted the reproductive health organization before.

In an interview with NBC News from South Carolina, Barbara Mescher Michaux said Robert Dear put glue in the locks of another Planned Parenthood clinic when they were married more than 20 years ago.

She characterized him in an affidavit she filed to divorce him in 1993 and in her Tuesday interview as a violent, isolated man, matching the descriptions of others who knew the 57-year-old suspect.

Police arrested Dear after an hourslong gunfight on Friday during which three people were killed and nine wounded. Officials say that after he was arrested, Dear said "no more baby parts" during a statement so rambling that it has been challenging to pinpoint what motivated the attacks.

Some have speculated that the gunbattle began in the parking lot outside the clinic and Dear was not motivated by opposition to abortion rights.

But Michaux said it seemed clear what drove Dear there. "For him to plan this and go there, he meant to go there," she said. "There is no doubt in my mind."

In her affidavit, Michaux said Dear had no friends. He would listen to music on headphones for hours, ignoring her. He'd vanish for gambling trips to Las Vegas or Atlantic City and suddenly explode in anger at home, kicking her and pulling her hair.

"Rob's anger erupts into fury in a matter of seconds and is alarming," she wrote. "You have to constantly monitor his emotional state."

She added that he appeared devoutly religious. "He claims to be a Christian and is extremely evangelistic, but he does not follow the Bible in his actions," Michaux wrote. "He says as long as he believes he will be saved, he can do whatever he pleases. He is obsessed with the world coming to an end."

Dear wore a white vest and blinked periodically as the judge spoke to him. He only spoke once, saying "no questions" when the judge asked him if he had any questions about the first-degree murder charges he faces.

Judge Stephen J. Sletta has sealed court documents in this case. The order was made available Monday after being issued Friday, the day of the attack. Such documents detail evidence gathered by investigators that justify arresting suspects and searching property.

Prosecutors said making them public would jeopardize the ongoing investigation. The judge agreed to keep the records sealed until the termination of the case or a further order of the court.

After the shooting Friday at the Planned Parenthood clinic in Colorado Springs, President Obama once again called for tighter gun control.

The president said, "...We have to do something about the easy accessibility of weapons of war on our streets to people who have no business wielding them. Period. Enough is enough."