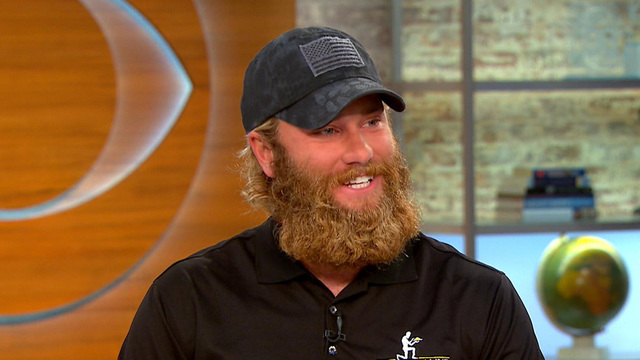 Six months ago, former Navy SEAL Chris Ring set out to honor the families of fallen troops by swimming the entire length of the Mississippi River. On Friday, he accomplished the incredible feat, finishing off a journey that took him across 10 states and more than 2,300 miles.

"The most important thing right when I crossed (the finish line), I looked over to where the boat was carrying all these gold star families and seeing them just so happy and together was the best experience," Ring said on "CBS This Morning" Monday, referring to families that have lost loved ones in military service.

"No gold star family wants to be a gold star family, so people should know and respect and really appreciate the sacrifice that was paid," Ring said. "Really the goal was that you could walk up to anybody in the street and ask what a gold [star] family is, and they're going to know what it is."

Ring began his journey in the spring at Lake Itasca, Minnesota, where the mighty river begins, and ended it in Head of Passes, Louisiana, at the edge of the Gulf of Mexico. He's the first American to accomplish the feat.

To remember the people he met and the stories they told, Chris collected their signatures on a boat that accompanied him on the water, ultimately filling two kayaks with names of the fallen.

Ring also said the "emotional roller coaster" of meeting with the families was the toughest part of his journey. But thinking about them and their stories and looking forward to meeting another gold star family helped him endure.

The thought of giving up never crossed his mind.

Despite being a former SEAL and training four months for long-distance swim, Ring said he was not a good swimmer. But he said he intended the mission to be "extremely difficult'"because it helped him focus on "why I'm doing it."

Ring said the journey also strengthened his own relationship with his father, who accompanied him throughout the trip.

Now that the journey is over, Ring said he looks forward to spending time with his wife and continuing to be a voice for gold families.

"Doing this challenge was very humbling. I feel lucky and privileged to be able to take it on and just meet these awesome families, just to hear the story of their loved ones ... and to just raise awareness for who they were as a person has been amazing ... and it's going to be with me for the rest of my life."