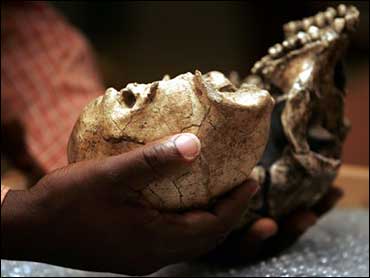 Surprising research based on two African fossils suggests our family tree is more like a wayward bush with stubby branches, challenging what had been common thinking on how early humans evolved.

The discovery by Meave Leakey, a member of a famous family of paleontologists, shows that two species of early human ancestors lived at the same time in Kenya. That pokes holes in the chief theory of man's early evolution — that one of those species evolved from the other.

And it further discredits that iconic illustration of human evolution that begins with a knuckle-dragging ape and ends with a briefcase-carrying man.

The old theory is that the first and oldest species in our family tree, Homo habilis, evolved into Homo erectus, which then became human, Homo sapiens. But Leakey's find suggests those two earlier species lived side-by-side about 1.5 million years ago in parts of Kenya for at least half a million years. She and her research colleagues report the discovery in a paper published in Thursday's journal Nature.

The paper is based on fossilized bones found in 2000. The complete skull of Homo erectus was found within walking distance of an upper jaw of Homo habilis, and both dated from the same general time period. That makes it unlikely that Homo erectus evolved from Homo habilis, researchers said.

It is the equivalent of finding that your grandmother and great-grandmother were sisters rather than mother-daughter, said study co-author Fred Spoor, a professor of evolutionary anatomy at the University College in London.

The two species lived near each other, but probably did not interact, each having its own "ecological niche," Spoor said. Homo habilis was likely more vegetarian while Homo erectus ate some meat, he said. Like chimps and apes, "they'd just avoid each other, they don't feel comfortable in each other's company," he said.

There remains some still-undiscovered common ancestor that probably lived 2 million to 3 million years ago, a time that has not left much fossil record, Spoor said.

Overall what it paints for human evolution is a "chaotic kind of looking evolutionary tree rather than this heroic march that you see with the cartoons of an early ancestor evolving into some intermediate and eventually unto us," Spoor said in a phone interview from a field office of the Koobi Fora Research Project in northern Kenya.

That old evolutionary cartoon, while popular with the general public, is just too simple and keeps getting revised, said Bill Kimbel, who praised the latest findings. He is science director of the Institute of Human Origins at Arizona State University and was not part of the Leakey team.

"The more we know, the more complex the story gets," he said. Scientists used to think Homo sapiens evolved from Neanderthals, he said. But now we know that both species lived during the same time period and that we did not come from Neanderthals.

Now a similar discovery applies further back in time.

For the past few years there has been growing doubt and debate about whether Homo habilis evolved into Homo erectus. One of the major proponents of the more linear, or ladder-like evolution that this evidence weakens, called Leakey's findings important, but he wasn't ready to concede defeat.

Dr. Bernard Wood, a surgeon-turned-professor of human origins at George Washington University, said in an e-mail Wednesday that "this is only a skirmish in the protracted 'war' between the people who like a bushy interpretation and those who like a more ladder-like interpretation of early human evolution."

Leakey's team spent seven years analyzing the fossils before announcing it was time to redraw the family tree — and rethink other ideas about human evolutionary history. That's especially true of most immediate ancestor, Homo erectus.

Because the Homo erectus skull Leakey recovered was much smaller than others, scientists had to first prove that it was erectus and not another species nor a genetic freak. The jaw, probably from an 18- or 19-year-old female, was adult and showed no signs of malformation or genetic mutations, Spoor said. The scientists also know it is not Homo habilis from several distinct features on the jaw.

That caused researchers to re-examine the 30 other erectus skulls they have and the dozens of partial fossils. They realized that the females of that species are much smaller than the males — something different from modern man, but similar to other animals, said study co-author Susan Anton, a New York University anthropologist. Scientists hadn't looked carefully enough before to see that there was a distinct difference in males and females.

This suggests that our ancestor Homo erectus reproduced with multiple partners.

All the changes to human evolutionary thought should not be considered a weakness in the theory of evolution, Kimbel said. Rather, those are the predictable results of getting more evidence, asking smarter questions and forming better theories, he said.