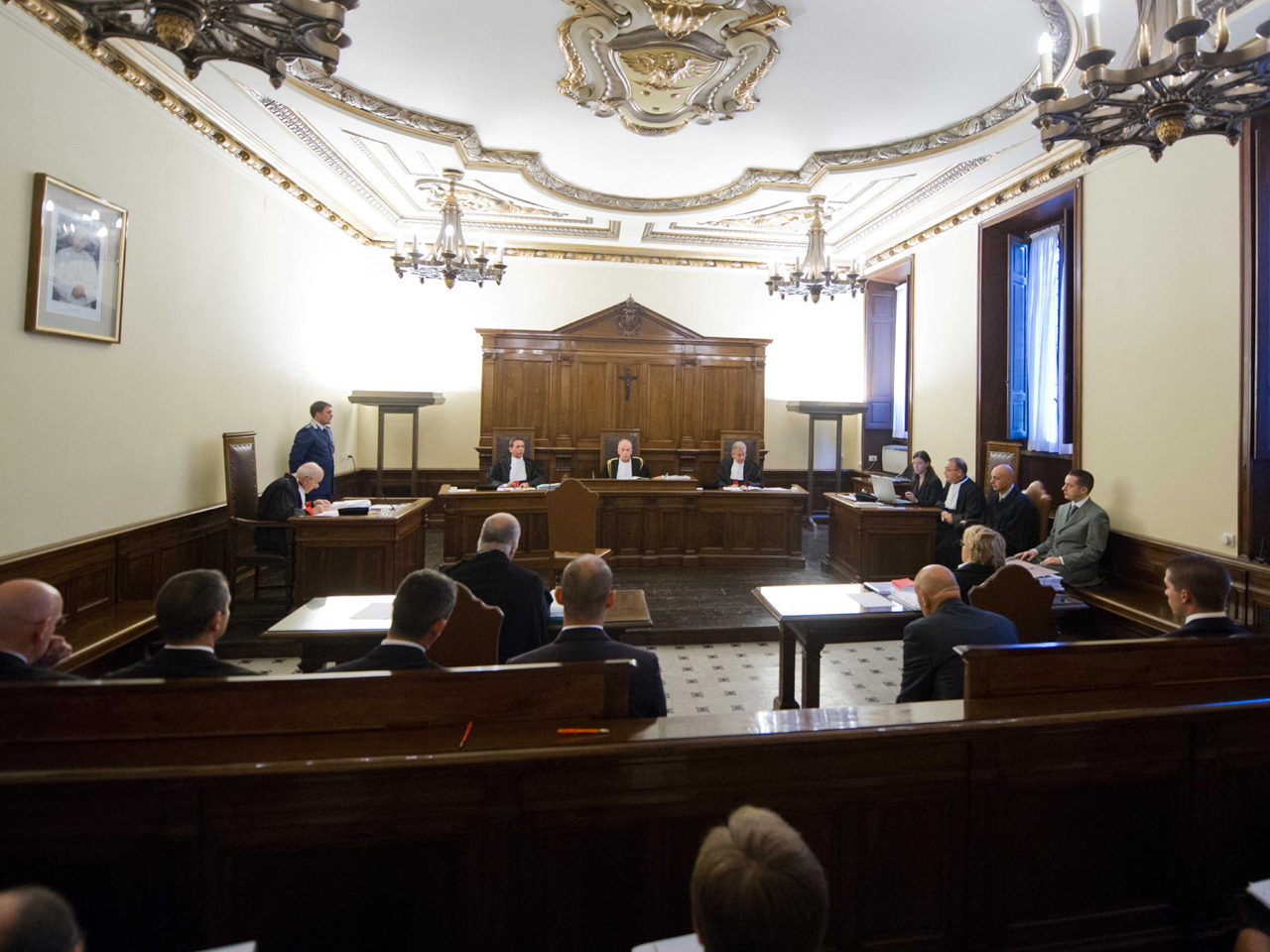 VATICAN CITY The pope's once-trusted butler went on trial Saturday for allegedly stealing papal documents and passing them off to a journalist in the worst security breach of the Vatican's recent history — a case that embarrassed the Vatican and may shed further light on the discreet, internal workings of the papal household.

In its first hearing in the case, the three-judge Vatican tribunal threw out some evidence gathered during the investigation of butler Paolo Gabriele, who is charged with aggravated theft. It also decided to separate Gabriele's trial from that of his co-defendant, a computer expert charged with aiding and abetting the crime.

Gabriele is accused of taking the pope's correspondences, photocopying the documents and handing them to Italian journalist Gianluigi Nuzzi, whose book "His Holiness: The secret papers of Pope Benedict XVI," was published to great fanfare in May.

Prosecutors have said Gabriele confessed to taking the documents because he wanted to expose the "evil and corruption" in the church. They quoted him as saying during an interrogation that he felt inspired by the Holy Spirit to inform the pope about the church's problems and that a "shock, even a media one, would have been healthy to bring the church back on the right track."

Nuzzi on Saturday wished Gabriele well, tweeting "Good Luck, courageous Paoletto, we're with you." He referred to Gabriele by the diminutive nickname used by the pope and other members of the papal household.

The trial inside the intimate, austere courtroom was the highest-profile case to come before the Vatican judiciary since the 1929 founding of the Vatican city state, the world's smallest sovereign state. Media from around the world converged on St. Peter's Square to cover the case, which has attracted attention not so much because of the content of the documents but because they were stolen from the pope's desk and leaked, allegedly by one of Benedict's closest assistants.

On Saturday, the court said the pope's personal secretary, Monsignor Georg Gaenswein, had been called as a witness, testimony that is sure to attract attention given that Gaenswein rarely speaks in public much less about the details of the tight-knit papal family of which Gabriele formed part.

Other witnesses include one of the four consecrated women who take care of the pope's apartment, a monsignor in the Vatican secretary of state, the No. 2 Swiss Guard commander and the head of the Vatican police force.

Judge Giuseppe Dalla Torre set the next hearing for Tuesday, when Gabriele will be questioned. He said he thought the whole trial could be wrapped up in four more hearings.

Gabriele faces up to four years in prison if he is convicted. He has already asked to be pardoned by the pope, something most Vatican watchers say is a given.

Gabriele, 46, appeared calm but tense during the 2 hour, 15 minute hearing, frequently crossing his hands or clasping them in his lap. He wore a light gray suit and tie.

He sat alone on a bench on one side of the courtroom, following the proceedings impassively. During a break in the hearing, he chatted with his attorney, Cristiana Arru, and greeted journalists with a nod and a smile as he entered and exited.

Arru raised a series of objections at the start of the hearing, only some of which were accepted by the court. One concerned two jailhouse conversations Gabriele had with the head of the Vatican police force without his lawyers present. The judges declared both inadmissible. The content isn't public.

Arru also sought access to the report of a commission of cardinals appointed by the pope to investigate the leaks alongside Vatican magistrates. The court denied the request.

The attorney for co-defendant Claudio Sciarpelletti successfully petitioned to have his client's trial separated from that of Gabriele. Sciarpelletti wasn't in the court Saturday and his trial date wasn't set.

Neither Gabriele's wife nor any of his three children attended the hearing. Space for the public was limited; eight of the 18 seats were taken up by the journalists who followed the proceedings and then briefed the rest of the Vatican press corps afterward.

The courtroom itself was spare, with wood paneling along the walls, a gilded crest of the Holy See in the ceiling, a photograph of Benedict over the prosecutor's chair and a crucifix over the chair of the presiding judge. It's located in a four-story palazzo tucked behind St. Peter's Basilica in the Vatican gardens.

Security was relaxed, with the guards at the tribunal entrance mostly concerned that none of the press or public brought in any recording devices: They even checked pens to make sure they couldn't record, and sequestered cell phones into safe boxes. No television or still cameras were allowed, except for Vatican media which filmed the first moments at the start of the hearing.

Given the content of the leaks and the Vatican's penchant for secrecy, the fact that the trial was open to the public and media might seem unusual. In fact, such trials in the Vatican's civil and penal tribunal are routinely public. They just don't happen very often or attract much attention. The Vatican's ecclesial courts on the other hand, which handle marriage annulments, clerical sex abuse cases and other matters of church law, remain firmly off-limits to outsiders.

In some ways, the willingness of the Vatican to proceed with the trial at all is an indication of its efforts to show new transparency in its inner workings. Benedict could have pardoned Gabriele as soon as he was arrested or charged, precluding any trial from getting off the ground. Instead he allowed the trial to go ahead, evidence of the "courage" the Vatican is showing to be more transparent, Vatican spokesman the Rev. Federico Lombardi has said.

He called such transparency unprecedented for the Vatican and likened it to the Holy See's recent decision to submit its financial institutions to outside scrutiny by the Council of Europe's Moneyval committee.