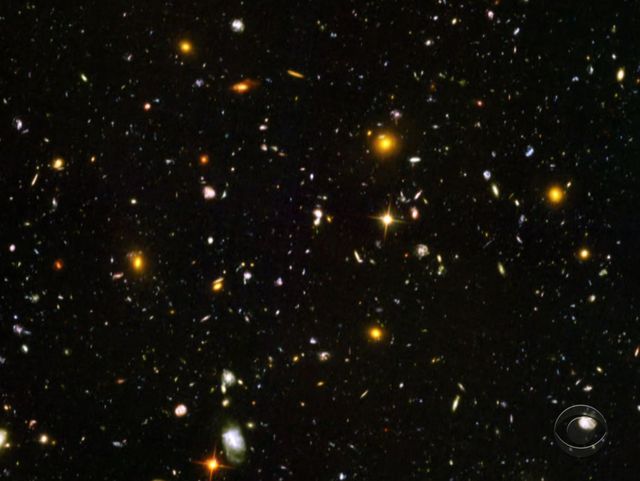 The universe was born almost 14 billion years ago, exploding into existence in an event called the Big Bang. Now researchers say they've spotted evidence that a split-second later, the expansion of the cosmos began with a powerful jump-start.

Experts called the discovery a major advance if confirmed by others. Although many scientists already believed that initial, extremely rapid growth spurt happened, finding this evidence has been a key goal in the study of the universe. Researchers reported Monday that they did it by peering into the faint light that remains from the Big Bang.

If verified, the discovery "gives us a window on the universe at the very beginning," when it was far less than one-trillionth of a second old, said theoretical physicist Lawrence Krauss of Arizona State University, who was not involved in the work.

"It's just amazing," he said. "You can see back to the beginning of time."

Another outside expert, physicist Alan Guth of the Massachusetts Institute of Technology, said the finding already suggests that some ideas about the rapid expansion of the universe can be ruled out.

Right after the Big Bang, the universe was a hot soup of particles. It took about 380,000 years to cool enough that the particles could form atoms, then stars and galaxies. Billions of years later, planets formed from gas and dust that were orbiting stars. The universe has continued to spread out.

Krauss said he thinks the new finding could rank with the greatest discoveries about the universe over the last 25 years, such as the Nobel prize-winning discovery that the universe's expansion is accelerating.

VIDEO: Scientists celebrate. Research co-leader Chao-Lin Kuo of Stanford surprises Andrei Linde, one of the founding fathers of inflation theory, with news of the discovery.

The new results were announced by a collaboration that includes researchers from the Harvard-Smithsonian Center for Astrophysics, the University of Minnesota, Stanford University, the California Institute of Technology and NASA's Jet Propulsion Laboratory. The team plans to submit its results to a scientific journal this week, said its leader, John Kovac of Harvard.

For their research, astronomers scanned about 2 percent of the sky for three years with a telescope at the South Pole, chosen for its very dry air to aid in the observations.

They were looking for a specific pattern in light waves within the faint microwave glow left over from the Big Bang. The pattern has long been considered evidence of the rapid growth spurt, known as inflation. Kovac called it "the smoking gun signature of inflation."

The scientists say the light-wave pattern was caused by gravitational waves, which are ripples in the interweaving of space and time that sprawls through the universe. If confirmed, the new work would be the first detection of such waves from the birth of the universe, which have been called the first tremors of the Big Bang.

Arizona State's Krauss cautioned that it's possible that the light-wave pattern is not a sign of inflation, although he stressed that it's "extremely likely" that it is. It's "our best hope" for a direct test of whether the rapid growth spurt happened, he said.

Krauss and other experts said the results must be verified by other observations, a standard caveat in science.

Marc Kamionkowski, a theoretical physicist at Johns Hopkins University who didn't participate in the work, called the detection of the light-wave pattern "huge news" for the study of the cosmos.

"It's not every day you wake up and learn something completely new about the early universe," he said.