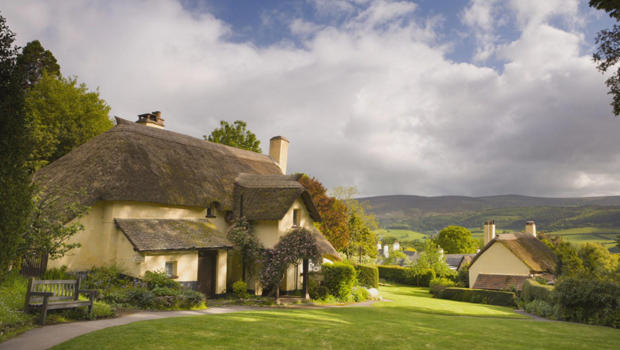 GRASPING AT STRAWS is all the rage among a growing number of British homeowners, as Mark Phillips now shows us:

When it comes to housing design, it's hard to get more retro than this: a thatched roof, made from compacted straw.

Chris Dodson, a fourth-generation thatcher, wielded his mallet, explaining, "It compacts the straw even more."

According to Dodson, with a family business going back about a hundred years, business has never been better.

He is much in demand.  "We can do emergency repair work quite quickly," Dodson said, "but for a full rethatch you're looking at least two years in advance."

There's always been plenty of work for thatchers.  The roofs need periodic maintenance, even replacing every 20 to 40 years.

The top bit, the ridge, needs the most frequent work, and is the most distinctive feature.

Each thatcher has his style -- a thatcher signature. "Yes, and you can tell just by looking," Dodson said.

But thatch is making a comeback -- not just on 300 or 400-year-old so-called "chocolate-box" period cottages. Now, thatch has become cool.

If you're looking for a period property, it's hard to get more period than one that's got grass on the roof. Realtor Sophie Gannon showed Phillips one such house on the market for $1.5 million.

Once, the thatched roof might have put buyers off -- all that maintenance, and the fire risk. But now there are modern, fire-resistant coatings to reduce the risk, and Gannon says thatch is a selling point.

She says she has clients coming to her in search of a "dream country house," a thatch cottage. "Yeah, we do get people specifically coming and asking for that," she said.

An "organic" building material doesn't hurt, either. "It's very trendy," said Gannon. "Everyone wants to be environmentally-friendly."

Phillips visited a house designed by architect Allister Godfrey, covered in thatch. It's a striking contrast of a new structure wearing a classy old hat.

"I think it's a modern house with a cozy covering, if that's not too fine way of putting it," Godfrey replied.

And whether it's a modern house, or a 400-year-old one, coziness counts.

And, according to Christine and Brian Marshall, who have lived for 40 years in the house where Chris Dodson is fixing the roof, there's something else a thatched house provides. "You just get this feeling of comfort and peace," said Christine.

Which is something any architect would like to design in.

"I think it's a viable product to use in the future," Godfrey said. "Where people are looking for something different and lasting, recyclable, it's got a place, definitely."