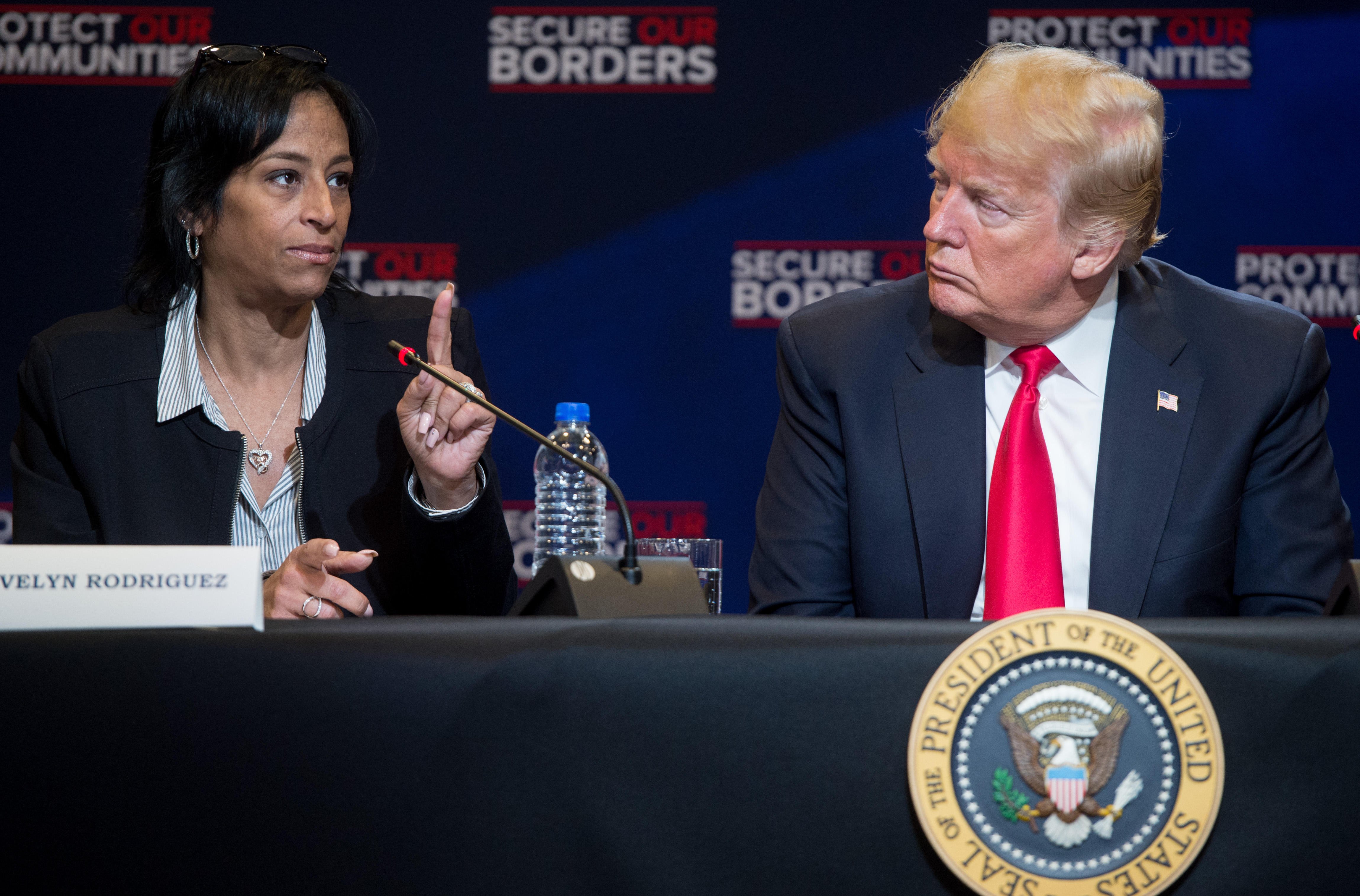 NEW YORK --  A grieving New York mother recognized by President Trump at the State of the Union in his campaign against deadly MS-13 gang violence was struck by an SUV and killed at her slain daughter's memorial site Friday. A law enforcement official told the Associated Press Evelyn Rodriguez and another person were standing in the street and yelling at the driver of the SUV before the vehicle sped forward and struck her.

Rodriguez was hit around 4 p.m. in Brentwood, police said, on the street where her 16-year-old daughter Kayla Cuevas' body was found beaten and slashed two years ago to the day. Cuevas' friend, 15-year-old Nisa Mickens was also killed.

The community is the epicenter of the fight against MS-13 violence on Long Island.

Rodriguez was pronounced dead at a hospital.

Mr. Trump said in a tweet: "My thoughts and prayers are with Evelyn Rodriguez this evening, along with her family and friends. #RIPEvelyn."

So far, there is no evidence of ties to MS-13 or any indication that the crash was retribution by the gang, said the official, who was not authorized to discuss an ongoing investigation publicly and spoke to the AP on condition of anonymity.

The driver remained at the scene and was not immediately arrested, according to the official, who added that detectives are still investigating what prompted the confrontation.

U.S. Rep. Peter King, R-N.Y., who had worked with Rodriguez on a campaign ad, was on his way to a vigil at the memorial site when he learned that she had been hit. He said it happened about an hour before a service was scheduled to begin.

"We've been talking to everyone all week about it," King told CBS New York. "I get a call from her friend who was with her and said there has been a horrible accident and that Evelyn has been run over by a car and was in very bad shape."

"It's a tragedy beyond belief," King told the AP. "Everyone is in shock. What more could happen to one woman?"

Suffolk County District Attorney Tim Sini, who was police commissioner when Cuevas and Mickens were killed, said Rodriguez was "one of the strongest people" he's ever met and that he's heartbroken over her death.

"She was a fierce advocate for her hometown of Brentwood and was fearless in her fight to put an end to the violence caused by MS-13 to ensure that other parents never have to endure the pain she suffered," Sini said.

Rodriguez spoke out against the gang and the local school district after Cuevas and Mickens were attacked with machetes and baseball bats. Mickens' body was found near an elementary school on Sept. 13, 2016. Cuevas' body was found the next day, a few hundred feet away.

The girls' alleged killers, who were arrested along with about a dozen other suspected MS-13 members, are facing murder charges that could result in the death penalty.

MS-13, or the Mara Salvatrucha, is blamed for dozens of killings on Long Island since 2016. Trump has blamed the violence on lax immigration policies.

Rodriguez stood with Cuevas' father, Freddy Cuevas, and Mickens' parents at the State of the Union in January and sat alongside Trump and King at a gang violence forum in May on Long Island.

"My daughter, Kayla, was a beautiful girl," Rodriguez said at the forum. "She had dreams, and they took that away from her. That's not right. And how these kids were murdered, tortured, is unacceptable."

Prosecutors say Kayla was targeted because of ongoing disputes with gang members at her school. They say Nisa was in the wrong place at the wrong time.

Rodriguez said that employees failed to act when told that the girl was being threatened. The lawsuit says the bullying went on for two years before the teenager was killed.

Rodriguez told a House subcommittee last year that residents were living in fear and were afraid to let their kids play outside.

"The MS-13 gang is so unpredictable you just don't know who is who with them," Rodriguez said. "MS-13 is a new breed of murderers, they are children, kids killing kids, and as they continue to grow, so does their techniques of recruiting helpless kids into their wicked actions."

MS-13 is believed by federal prosecutors to have thousands of members across the U.S., primarily immigrants from Central America.

It has a stronghold in Los Angeles, where it emerged in the 1980s as a neighborhood street gang, and is suspected of violence in cities and suburbs across the United States.

Cuevas and Mickens' deaths put a sharpened focus on what had already been a spate of gang violence on Long Island. MS-13 has been blamed for more than two dozen slayings across a wide swath of the island since January 2016.

Last month, an MS-13 member pleaded guilty to participating in the brutal massacre of four young men in nearby Central Islip.

Josue Portillo, 17, admitted to planning the April 2017 killings with other MS-13 defendants because he said they believed the four were rival gang members, prosecutors said. The victims were lured to a park and attacked with machetes, knives and clubs.