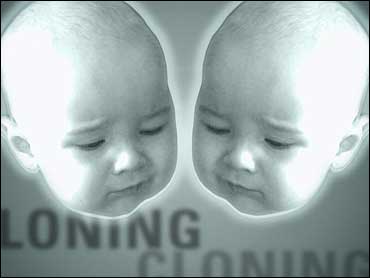 A scientist's announcement Friday that her group had produced the first cloned human being triggered skepticism from researchers, condemnation from some religious groups and a federal investigation.

The 7-pound baby was born Thursday by Caesarean section and will be home in three days, said Brigitte Boisselier, a chemist and CEO of Clonaid, the company that did the experiment. She wouldn't say where the baby was born; she did say the birth was at 11:55 a.m. local time.

Boisselier said the baby, dubbed "Eve" by the scientists, is a clone of a 31-year-old American woman and was born outside the United States, but wouldn't specify where.

The woman donated the DNA for the cloning process, had the resulting embryo implanted and then gestated the baby, Boisselier said. If confirmed, that would make the child an exact genetic duplicate of her mother — the same as an identical twin.

Boisselier, who wouldn't reveal any names, said the mother had resorted to cloning because her husband was infertile.

"The baby is very healthy," she said. "The parents are happy. I hope that you remember them when you talk about this baby — not like a monster, like some results of something that is disgusting."

Boisselier did not immediately present DNA evidence showing a genetic match between mother and daughter. Boisselier said results would come within nine days.

"You can still go back to your office and treat me as a fraud," she said. "You have one week to do that."

As CBS News Correspondent Jim Axelrod reports, if Boisselier is telling the truth, life as we know it is history.

However, Boisselier refused to say where the baby was born, identify her parents, or even provide a picture.

Ethicist Jonathan Moreno is troubled by so much of today's announcement. At the top of his list are the problems seen in animals that have been cloned so far, which makes Boisselier's claims of good health for the baby premature at best.

"There are people who have basically told the scientific world to take a hike," says Moreno.

Clearly, the announcement is creating a flood of questions: ethical, medical, political, religious -- some which belonged solely to the field of science fiction up to this point.

Most scientists, already skeptical of Boisellier's ability to produce a human clone, will probably demand to know exactly how the DNA testing was done before they believe the announcement.

"We'll wait and see, I guess. I'm still a skeptic and I'm hoping that it's not true," said University of Georgia cloning expert Steve Stice.

In Rome, fertility doctor Severino Antinori, who said weeks ago that a cloned baby boy would be born in January, dismissed Clonaid's claims and said the group has no scientific credibility.

Clonaid was founded in the Bahamas in 1997 by Claude Vorilhon, a former French journalist and leader of a group called the Raelians. Vorilhon and his followers claim aliens visiting him in the 1970s revealed they had created all life on Earth through genetic engineering.

Cloning produces a new individual using only one person's DNA. The process is technically difficult but conceptually simple. Scientists remove the genetic material from an unfertilized egg, then introduce new DNA from a cell of the animal to be cloned. Under the proper conditions, the egg begins dividing into new cells according to the instructions in the introduced DNA.

Legislation or guidelines to ban human cloning are pending in dozens of nations, including the United States. Several countries, including Britain, Israel, Japan and Germany, already have banned it. There is no specific law against it in the United States, but the Food and Drug Administration contends it must approve any human experiments in this country.

In Washington, a senior FDA official said Friday that the agency would probe whether any U.S. law was broken involving human experiments.

So far scientists have succeeded in cloning sheep, mice, cows, pigs, goats and cats. Many scientists say cloning is too risky because of abnormalities seen in cloned animals.

Among the possible pitfalls are premature aging and other health problems.

"There's just not enough animal studies that have been completed to verify the safety of it," said Mark Westhusin, a professor at Texas A&M University who has cloned cattle and cats. He added that if the claim is genuine, "I think they're taking a big risk in terms of health hazards to the child."

Moral issues are also paramount in the debate. While advocates of cloning say it has the potential to create organs for life-saving transplant operations, opponents — many of them also opposed to abortion rights — believe cloning interferes with natural law.

In addition, some object because the process of cloning could involve "the creation and destruction of human embryos on a massive scale," says the U.S. Conference of Catholic Bishops.

Reacting to the news, the Southern Baptist convention warned of the dangers of rogue scientists, while an orthodox Jewish group cautioned against overreaction since there is still no proof of the cloning.

Boisselier said she expects four more babies — from North America, Europe and two from Asia — to be born in a few weeks. Two of the couples are using preserved cells taken from their own children before their deaths, and one is a lesbian couple, she said.