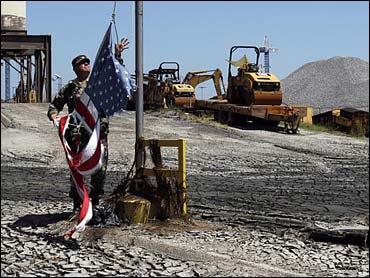 Police and soldiers are coaxing some of Hurricane Katrina's stubborn holdouts from their homes, a day after the mayor ordered all 10,000 or so residents still in this ruined city evacuated — by force, if necessary — because of the risk of fires and disease.

"I haven't left my house in my life. I don't want to leave," said a frail-looking 86-year-old Anthony Charbonnet, shaking his head as he locked his front door and walked slowly backwards down the steps of the house where he had lived since 1955.

The efforts to evacuate come as tragic reports of people who were unable to get out are starting to emerge. Louisiana Congressman Charlie Melancon says more than 100 people died in a dockside warehouse and CBS News Correspondent Lee Cowan reports that 32 died at a flooded-out nursing home just outside New Orleans.

Cowan reports that long before the storm hit, a physician offered the owner of the nursing home two buses to help evacuate the residents. The owner declined, but two hours later, changed her mind and pleaded for help -- but the storm was moving in, and by then the buses were helping others.

Aaron Broussard, the president of nearby Jefferson Parish, had a colleague who's mother was in the nursing home, Cowan reports. He promised her over and over again help was on the way.

As the putrid, bacteria-filled floodwaters began to slowly recede with the first of the city's pumps returning to operation, Mayor C. Ray Nagin instructed law enforcement officers and the U.S. military late Tuesday to evacuate all holdouts for their own safety. He warned that the fetid water could spread disease and that natural gas was leaking all over town.

As of midday Wednesday, there were no reports of anyone being removed by force.

"We have thousands of people who want to voluntarily evacuate at this time," Police Chief Eddie Compass said. "Once they all are out, then we'll concentrate our forces on mandatory evacuation."

CBS News Correspondent John Roberts reports that some residents are complaining about the aggressive tactics of some of state forces who've joined the evacuation effort.

"They came at gunpoint, told us, 'Come out of the house with a gun, we'll shoot you. Get in the boat now," said Rick Matthew.

Roberts reports that city officials – already stretched beyond limits – don't have the resources to look after people so isolated and they fear, with each passing day, health and safety becomes a greater concern.

"It's the whole sewer system. This city's like a big bowl and that sun is just baking a great big toilet every day," said D.J. Riley of the South Carolina Department of Natural Resources.

Dr. Julie Gerberding, director of the Centers for Disease Control and Prevention, said the health hazards from the water make it imperative that remaining residents get out.

"If you haven't left the city yet, you must do so," she said. The first government tests confirmed Wednesday that floodwater bacteria associated with sewage are at least 10 times higher than acceptable safety levels.

At least four people may have died of a waterborne bacterial infection circulating in Katrina's floodwaters, health officials said. Doctors are being urged to watch for diarrheal illnesses caused by such things as E. coli bacteria, certain viruses, and a type of cholera-like bacteria common in warm Gulf Coast waters.

The stepped-up evacuation came as workers struggled find and count the corpses decaying in the 90-degree heat. Even when cadaver dogs pick up a scent, workers frequently cannot get at the bodies without heavy equipment. The mayor has estimated New Orleans' death toll could reach 10,000.

Meanwhile, firefighters battled blazes around New Orleans — an emerging threat in a city where the water pressure is too low to fight fires and where many people are using candles because of the lack of electricity. At the same time, workers returning to the city to restart essential services came under sniper fire.

More than 100 law officers using armored personnel carriers converged on a housing project and captured a suspect who had been firing on telephone workers, authorities said.

"These cell teams are getting fire on almost a daily basis, so we needed to get in here and clean this thing up," police Capt. Jeff Winn. "We're putting a lot of people on the street right now, and I think that we are bringing it under control. Eight days ago this was a mess. Every day is getting a little bit better."

The mayor's everyone-out directive — which superseded an earlier, milder order to evacuate made before Hurricane Katrina crashed ashore Aug. 29 — came after rescuers scouring New Orleans found hundreds of people ignoring warnings to get out.

U.S. Marines in New Orleans say they will not forcibly evacuate anyone; they are not law enforcement, reports CBS News correspondent Cami McCormick.

Meanwhile, the White House announced that President Bush is asking lawmakers to approve another $51.8 billion to cover the costs of federal recovery efforts.

The federal government also plans to hand out debit cards worth $2,000 each to families displaced by Hurricane Katrina. FEMA officials said the program is aimed at those most in need, so not all families that fled their homes will be eligible. The cards are to be used to help victims purchase food, transportation and other essentials.

Dolores Devron and her husband, Forcell, finally agreed to go. Dolores Devron said she was relieved the couple were allowed to take their dog with them but angry they were ordered out.

"There are dead babies tied to poles and they're dragging us out and leaving the dead babies. That ain't right!" she screamed, waving her arms as she was directed onto a troop carrier truck.

Picola Brown, 47, hobbled slowly down the street on her crutches. She said she had not been able to leave because a truck ran over her left foot shortly before the storm struck, breaking a toe.

"The mayor said everybody's got to go. I got ready. I just don't want them knocking on my door," she said.

"Where do you want to go?" asked a soldier from the 82nd Airborne Division. She answered, "Wherever it's comfortable."

Patricia Kelly, 41, sat under a tattered, dirty green-and-white-striped patio umbrella in front of an abandoned barber and beauty shop in the devastated Ninth Ward. Her home was flooded; she was not able to get back in, but did not want to leave the neighborhood.

"I'm going to stay as long as the Lord says so," Kelly said. "If they come with a court order, then we'll leave. I hope it doesn't get to the point where we're forced out."

Sgt. Joseph Boarman of the 82nd Airborne, standing on a corner, said he understood the reluctance to leave: "It's their home. You know how hard it is to leave home, no matter what condition it's in."