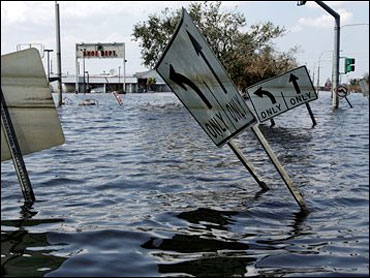 "Human contact with the flood water should be avoided as much as possible," said EPA Administrator Stephen L. Johnson.

Also found in the first round of testing were elevated lead levels, a risk if people, particularly children, were to drink the water.

But increasingly, in some places of the city, clean water is running, reports The Early Show's Harry Smith from New Orleans. But in others, a safe drinking water source is almost impossible to find, and dirty floodwater is being pumped out.

"We've taken some water samples," Nagin said Tuesday. "The water colorations are changing. I think there is toxic waste in there. And we're going to figure that out and continue to drain, and make this city safe."

Residents have been told since Hurricane Katrina to avoid drinking the water.

But EPA's first tests — which tracked levels of E. coli and other coliform bacteria that are a marker for sewage contamination — emphasize a risk from skin contact as well. The EPA didn't test how much sewage was in the water, but quit when analyses hit the 10-fold mark.

Moreover, this was just a first test.

"We don't know what else is contained in that water," Johnson stressed, saying that daily samples from different neighborhoods were being taken.

As the putrid, bacteria-filled floodwaters began to slowly recede with the first of the city's pumps returning to operation, Mayor C. Ray Nagin instructed law enforcement officers and the U.S. military late Tuesday to evacuate all holdouts for their own safety.

He warned that the fetid water could spread disease and that natural gas was leaking all over town.

As of midday Wednesday, there were no reports of anyone being removed by force. Police Chief Eddie Compass said. Once they all are out, he said, "then we'll concentrate our forces on mandatory evacuation."

Although toxic floodwaters receded inch by inch, only five of New Orleans' normal contingent of 148 drainage pumps were operating Tuesday, the Corps said.

How long it takes to drain the city could depend on the condition of the pumps — especially whether they were submerged and damaged, the Corps said. Also, the water is full of debris, and while there are screens on the pumps, it may be necessary to stop and clean them from time to time.

Federal health officials stressed that rescue workers need to wear protective clothing before walking in flood waters, and that anyone who comes into contact with the dirty water should be careful not to splash it into their faces — and to find clean water and soap for handwashing.