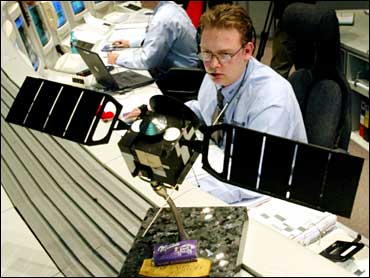 The European Space Agency's historic landing of the Huygens probe on Titan capped a banner year which took agency spacecraft to Mars, the moon and toward a distant comet.

The agency's scientists and engineers are now preparing for the next goal of their interplanetary program — a launch to Venus later this year, in another sign of ESA's growing ambition and accomplishments in space.

The successful landing of Huygens last week after a seven-year voyage — and the pictures of the haze-shrouded, ice-strewn surface proudly displayed at mission control in Darmstadt, Germany — put ESA in the center of attention after decades in the shadow of the U.S. and Soviet-Russian programs.

"What we're seeing is a flowering, maturing of their planetary exploration capabilities," said Paul Spudis, a planetary scientist at John Hopkins University in Baltimore. "Their new stuff is every bit as good as the stuff the U.S. is coming up with."

Long-term plans for the agency, celebrating its 30th anniversary this year, include two flagship missions to Mars — ExoMars would land a rover on the planet, and Mars Sample Return would bring back a sample of the Martian surface.

A win for Snapchat in lawsuit tied to speed filter

In the coming year, ESA also will launch their Venus Express craft, to study the composition of the planet's atmosphere.

Additionally, the first of four satellites for the Galileo navigation system, comparable to the U.S. Global Positioning System, is slated for launch in November. Galileo represents what ESA spokesman Franco Bonacina calls the agency's "main objective" — technology that brings something concrete to the average taxpayer.

"Of course we don't forget space science, which is the backbone of our being, but we do give priority to things that benefit the European citizen," Bonacina said in a telephone interview from ESA headquarters in Paris.

For the moment, though, ESA is basking in the glow of their recent streak of successes, which began last year with photographs from the Mars Express orbiter showing what ESA scientists said was the most direct evidence yet of water in the form of ice on the Red Planet.

Although the British-built Beagle 2 lander was lost without a trace after detaching from Mars Express, the orbiter performed flawlessly, delivering detailed images of the Martian surface.

SMART 1 — ESA's first ever mission to Earth's moon — tested a fuel-efficient, low-thrust ion propulsion system and navigational software that lets ground controllers know the exact location of a craft in space. It reached lunar orbit in November, where it is busy photographing the lunar poles and using an X-ray camera to provide advanced maps of the surface.

In March, the agency launched its Rosetta craft on a 10-year journey to land on a distant comet, where it will search for clues about the birth of our solar system and life here on Earth.

One of the main benefits of ESA's growing interest in exploration, scientists say, is the increase in the amount of information gathered.

Unlike the days of the Cold War when space exploration served as a battleground for superiority between the United States and the Soviet Union, the European and U.S. missions complement one another. The Cassini-Huygens mission — where ESA's probe "hitchhiked" on the back of NASA's orbiter — is only the most recent example.

"You have to pick and choose and to that extent they are doing complementary things (to NASA) and that's a good thing," said Spudis.

"We've always had an agreement to share data, and that way everybody wins."