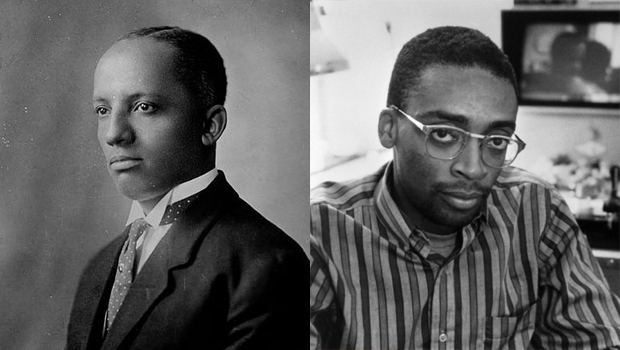 Eunique Jones Gibson, cultural activist, photographer, author ("Because of Them, We Can")

It's hard to pinpoint one civil rights figure who has influenced me. However, when I think about someone who has had the greatest impact, two people come to mind: Carter G. Woodson and Spike Lee. Both of these individuals have influenced me in a way that empowered me to create the "Because of Them, We Can" movement.

Carter G. Woodson said, "If a race has no history, if it has no worthwhile tradition, it becomes a negligible factor in the thought of the world, and it stands in danger of being exterminated." As a historian, Woodson recognized the danger of omitting our contributions from books, classrooms and conversations where history was being taught. His successful quest to implement Negro History Week (which eventually evolved into what we now know as Black History Month) opened the door for me to expand on the sharing of our history beyond a week or a month. It helped me realize the importance of uplifting and reflecting on our history on a daily basis in order to remain cognizant of the sacrifices that were made on my behalf, the greatness that exists within, and my responsibility to live a life that honors them both.

Then there's Spike Lee. Most people wouldn't consider him to be a civil rights figure. However, I see him as just that, though unconventional. When Spike Lee created the film "Do the Right Thing," he allowed his lens to give voice to civil rights issues within his community. He illustrated gentrification, racism, police brutality, and economic and social issues in a way that made it palatable for others to consume and discuss on a national platform.

Since then he has continued to use his lens to share the stories of Malcolm X and the "Four Little Girls," individuals whose lives and deaths impacted and pushed the civil rights movement forward. I was not only exposed to issues and individuals who have impacted my community through Spike Lee, but I was also introduced to a unique approach in which these issues could be amplified and brought to life to reach others.