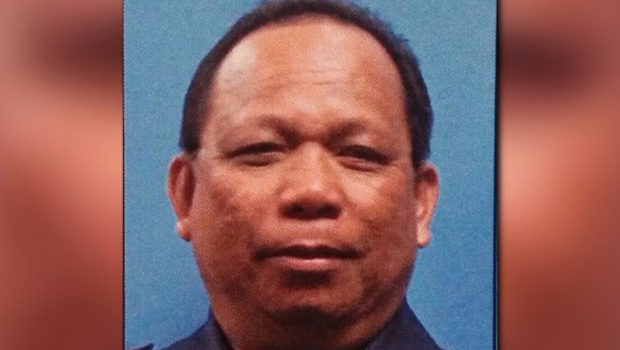 ROCKVILLE, Md. - Police say they've seen no signs of remorse from a federal police officer accused of a two-day shooting spree in a string of suburban parking lots in Maryland that left three people dead and three wounded.

Eulalio Tordil, 62, of Adelphi is scheduled to make an initial court appearance Monday in Rockville, a suburb near the nation's capital, on charges including first-degree murder.

Police say the spree began with a domestic motivation, with Tordil fatally shooting his estranged wife, Gladys Tordil, who had recently obtained a protective order against him. A bystander who tried to intervene was wounded.

Gladys Tordil was a beloved high school chemistry teacher in Prince George's County, not far from High Point High School, where she was killed Thursday while waiting in the parking lot. The couple's daughters are seniors at that school, preparing to graduate.

The shootings continued Friday at two different mall parking lots. At the first, one man was killed and his friend was wounded while coming to the aid of a woman, who also was wounded. At the second, a woman was shot and killed in her car.

Police said Saturday that the shootings a day earlier were likely botched carjackings. They also identified the victims who died in the Friday shootings: Malcom Winffel, 45, of Boyds, was shot and killed at the first crime scene Friday. Claudina Molina, 65, of Silver Spring, died at the final crime scene.

Winffel's family was not surprised to learn that he had died in an effort to help others.

"He was always helping people," said his sister, Pilar Winffel, of Columbia. "If a friend of a friend was moving, he would go and help."

At a news conference Saturday night, Montgomery County Assistant Police Chief Russ Hamill said Winffel and his friend, who was not identified, were coming to the carjacking victim's aid when they were shot.

Hamill said Winffel's friend, who was described Friday as being in grave condition, is "making progress. We remain hopeful he'll survive."

Hundreds of people attended a vigil remembering Winffel on Saturday evening at Clarksburg High School, where his two children are enrolled. A gofundme page set up to help the family with funeral expenses and the kids' college expenses had received nearly $30,000 in donations as of Saturday evening.

In an interview Saturday evening, Pilar Winffel said her brother had gone to the mall for lunch with a friend from work. Witnesses told her that her brother was shot as the woman under attack by Tordil spotted Winffel in the parking lot and ran toward him for help. Winffel was shot with his arms extended, reaching out to help the woman, Pilar said. She was told Tordil was smiling as he fired the shots.

At Saturday's news conference, Hamill said Tordil spoke to investigators a little about the shootings. "I would not describe him as being remorseful," Hamill said.

Tordil, a federal security officer employed by the Federal Protective Service, was put on administrative duties in March after a protective order was issued against him.

The protective service said Tordil's weapon, badge and credentials were taken when he was placed on leave.

A friend of Tordil says he saw the couple as recently as three weeks ago and wasn't aware they had any marital troubles.

Gary Cochran of Sterling, Virginia, said in a phone interview Sunday evening that Tordil was "always smiling and very polite."

Cochran added that he was stunned that the federal police officer is accused of a two-day shooting spree in suburban Maryland parking lots.

"He was a very quiet person, very soft-spoken," Cochran said of Tordil, who attended high school with his wife. "We're shocked because we can't imagine this is the person we invited into our home."

Tordil also got into trouble in 2008; a report from the Department of Housing and Urban Development's inspector general says that Tordil entered into a civil settlement and paid HUD nearly $16,000 after he obtained a $27,000 discount on a property through a federal program but failed to live up to the program rules, which required him to live in the property where he received the discount.

Hamill said Saturday that Tordil appeared to have purchased the Glock after being subject to the protective order.

The charges against Tordil carry a maximum sentence of life in prison. Maryland abolished the death penalty in 2013.