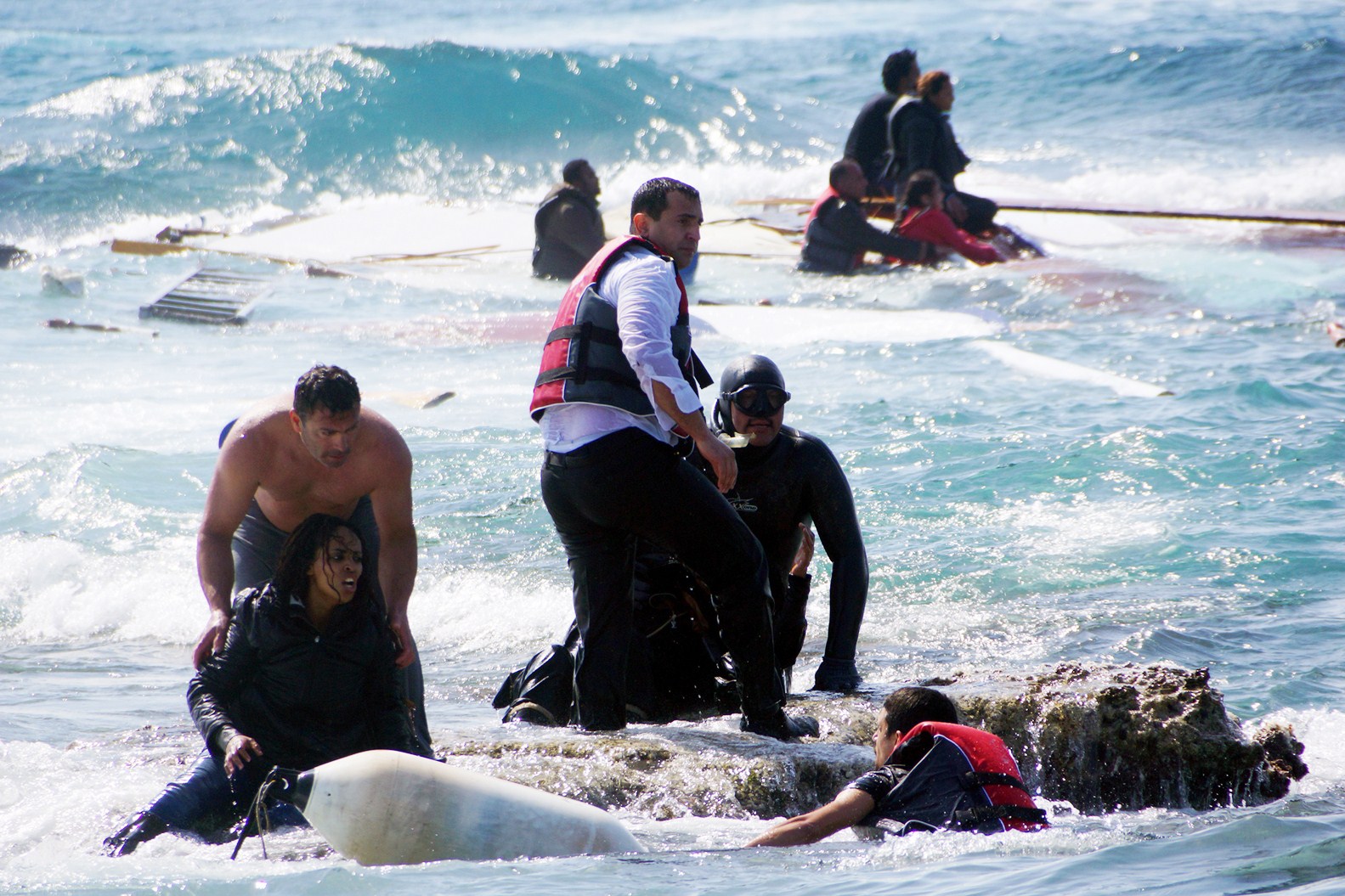 MILAN -- Rescuers responded Monday to two new migrant emergencies off Libya and a third boat ran aground near Greece following a weekend disaster that left hundreds feared dead, as top European officials searched for ways to stem the tide of illegal trafficking from Africa and the Middle East.

Decrying what he called an "escalation in death voyages," Italian Premier Matteo Renzi urged a united European response to combat the rising humanitarian crisis in the Mediterranean Sea.

"We are facing an organized criminal activity that is making lots of money, but above all ruining many lives," Renzi said in a joint news conference with Malta Prime Minister Joseph Muscat.

Calling the weekend tragedy "a game changer," Muscat said that "if Europe doesn't work together, history will judge it very badly."

Meanwhile, new details emerged about the disaster that left at least 700 feared drowned - a death toll that, if confirmed, could make it the deadliest migrant tragedy ever. Italian prosecutors said hundreds were locked below deck unable to escape when the rickety boat capsized off the coast of Libya.

Speaking at a news conference in Catania, Sicily, prosecutor Giovanni Salvi said "a few hundred were forced into the hold and they were locked in and prevented from coming out." He said hundreds more were locked on a second level of the boat, which also had hundreds of migrants squeezed into its upper deck.

Muscat, the Maltese premier, estimated that the smugglers who organized the ill-fated crossing had cashed in 1 million to 5 million euros (dollars).

One survivor of the weekend sinking, identified as a 32-year-old Bangladeshi, has put the number of people on board the smugglers' boat at as many as 950, though Salvi said that number should be treated with caution since the survivor had no means to verify numbers. He said the coast guard had estimated 700 people were on board, based on its observations at the scene.

Renzi said that recent tragedies have proven that providing rescue wasn't always possible, given the conditions of the smugglers' boats and delicacy of such operations, and that the focus needs to be on preventing the boats from leaving Libya.

"Continuing to think that allowing them to depart and then chasing after them means putting at risk human lives," he said.

Renzi's focus on the smugglers came as the EU president announced that European Union leaders would meet Thursday in an emergency summit to discuss responses, and authorities in southern Italy announced they had broken up a smuggling ring responsible for helping African migrants reach Italian shores.

CBS News correspondent Holly Williams reports that some are fleeing the violence of Syria, others make their way to the coast of chaotic Libya -- just 300 miles from the Italian island of Sicily -- to try and escape poverty.

Thousands now live in camps in Italy, including Emmanuel, a Nigerian Christian who said he fled Islamic extremists in his homeland.

"We not complaining much, we just have to take whatever they give us," Emmanuel told Williams.

Even as European leaders grappled with how to respond to the crisis, more unseaworthy boats were setting off Monday on the perilous journey. Renzi said Italian ships were rushing to respond to distress calls from an inflatable life raft near the Libyan coast with 100 to 150 migrants on board and to another boat carrying about 300 people.

The International Organization for Migration earlier said its Rome office had received a distress call from three boats in need of help. The group says the caller reported 300 people on his sinking boat, with about 20 fatalities. No details were available about the other boats or their location, and it was not clear if they were the same rescues to which Renzi referred.

In a separate incident, at least three people, including a child, were killed and 93 others were rescued when a wooden boat carrying dozens of migrants who had departed from Turkey ran aground off the Greek island of Rhodes.

Prosecutors in Palermo, meanwhile, said the human trafficking ring they cracked had been involved in transactions worth hundreds of thousands of euros crisscrossing Europe as migrants paid not only to cross the Mediterranean but also to join relatives in northern Europe.

They identified the mastermind as an Ethiopian, Ermias Ghermay, who has been sought since an October 2013 shipwreck off Lampedusa, Italy, that left 366 people dead. He is believed to be in Libya. Authorities issued arrest warrants for 24 people, including 14 in Italy.

Meanwhile, the search continued for victims of the weekend shipwreck. Only 24 bodies, all men, have been recovered so far, and they were brought Monday aboard the coast guard ship Gregoretti for burial in Malta. The 27 survivors were to be brought later to Sicily by the same ship.

Capt. Gian Luigi Bove told reporters in Malta his vessel was about 80 kilometers (50 miles) away from the shipwreck when the distress call came in, and that they discovered two survivors when they arrived around 2 a.m. Sunday, along with bodies, floating in the sea.

The survivors were taken on board. He said there was no sign of the smuggler's boat, an indication that it may have already sunk.

Bove said the survivors were from sub-Saharan Africa and language issues were impeding the investigation.

Libya is a transit point for migrants fleeing conflict, repression and poverty in countries such as Eritrea, Niger, Syria, Iraq and Somalia, with increased instability there and improving weather prompting more people to attempt the dangerous crossing.

That instability will be a focus when EU leaders meet Thursday for their summit in Brussels. Renzi ruled out sending ground troops to Libya or a naval blockade of migrants, saying that would only provide a corridor for the smugglers.

Fighting in Libya has escalated to its worst levels since the 2011 civil war that ended with the overthrow and killing of longtime dictator Moammar Gadhafi.

Rebel groups that fought against him kept their weapons and militias have mushroomed in number. The country now has rival governments - the internationally recognized one in the eastern city of Tobruk, and an Islamist-backed one in the capital, Tripoli. The two sides have been negotiating in Morocco to end the fighting.

Malta and Italy are closest to the Libyan coast, and have received the brunt of a migrant tide that carried 219,000 people from Africa to Europe last year. Some 3,500 died or went missing along the way, the U.N. High Commissioner for Refugees Antonio Guterres said in a statement Sunday.

Mired in economic crisis and a facing a surging anti-foreigner electorate in many nations, there is little appetite across European governments to take in more poor migrants, however desperate their plight.

"If we make the work of traffickers easier and accept refugees that have gone overboard, this will make it an even better business for them," he said on Czech television. "We need to find a way to prevent people from setting out on such ships."