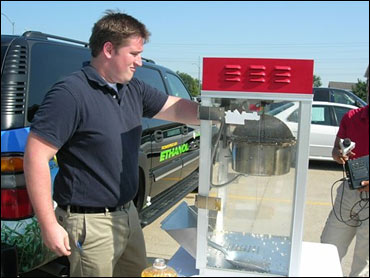 Ethanol producers are fed up with food industry claims that prices on everything from popcorn to soda are skyrocketing because of the rising demand for corn to make the renewable fuel.

Ethanol backers in Iowa focused their ire on the industry, particularly the popcorn market, during a news conference here Wednesday.

Standing in front of 11 large plastic bags containing 38.5 pounds of popcorn, Shaw claimed a person could buy that amount directly from a farmer for $5. He pointed to a bag of movie theater popcorn on a nearby table and said it costs the consumer just as much, if not more.

Some food companies argue that escalating corn prices, sparked by the increasing demand for ethanol, has forced them to raise prices for items containing corn, including meat and dairy products from animals that are fed the grain. It's been dubbed the "food-versus-fuel debate."

When it comes to popcorn, Shaw said, recent claims that movie-goers will pay 25 cents more per bag of popcorn because of the ethanol demand is ridiculous.

A $5 bucket of movie popcorn, he said, contains just .15 pounds of corn before popping. Based on 9-cents-per-pound rate that farmers made on the corn last year, that bucket contained slightly more than a penny of popcorn, he said. Higher corn prices means the moviegoer is getting about 2 cents of popcorn per bucket, he said.

"It just shows that there's no way that that small increase in the price of popcorn that the farmer gets justifies the large increases that they're talking about at the movie theater," he said. "And, this is true for so many other things."

For example, a six-pack of soda contains just 6 cents worth of corn sweetener - or about a penny a can, said Craig Floss, chief executive officer of the Iowa Corn Promotion Board and the Iowa Corn Growers Association.

"So if your six-pack of soda is going up any more than about six cents in this food-versus-fuel debate, than somebody else is profiting, and it certainly isn't the huge profits going to the Iowa corn grower," he said.

Tracy Boever, a spokeswoman for the American Pop Corn Co. in Sioux City, which makes Jolly Time brand popcorn, said the company hasn't been blaming anyone for higher prices, but "the fact remains that there are only so many acres of land and the popcorn industry, along with others, are competing for those acres."

The company's president, Garrett Smith, recently told The Des Moines Register that the demand for corn has led to a 65 percent increase in contract costs to get farmers to plant his product - the highest increase he's seen in 30 years.

"The reality is that we have not raised our prices, nor do we set movie theater concession prices," Boever said.

Shaw said consumers should instead look at transportation costs when it comes to rising food prices.

"So with the price of gasoline going up, and the price of diesel fuel going up, that probably has a bigger impact on the price at the grocery store and the movie theater than what the farmer is getting," he said.
By Amy Lorentzen