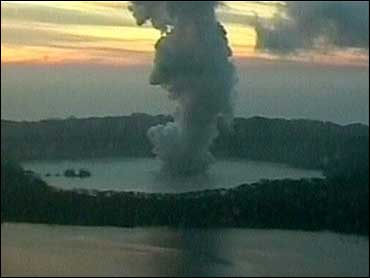 Huge columns of dense white steam and muddy ash spewed above the South Pacific island to reach the greatest height seen since it began erupting Nov. 27.

The plumes of steam and gases were bursting from a huge vent in the middle of muddy gray-brown lake Vui in the crater — which before the eruptions began last month was a picturesque calm aqua blue.

Pilot Charles Nelson of local charter company Flight Club Vila said the lake "is looking like a huge grubby bowl of hot kava," referring to a murky local drink made of the pounded roots of a local pepper plant mixed with water.

Nelson was speaking after flying close to the erupting volcano Thursday morning.

Skeletal dead trees ring the edge of Manaro's crater, while trees in dense jungle nearby were covered in ash which has been belching from the volcano.

The huge smoke, ash and gas plume cast a shadow over now deserted villages clinging to the volcano's flank.

Villagers have been evacuated from the path of a possible lahar, or mud flow, that vulcanologists fear could burst over the crater lip if the eruption continues or intensifies, sweeping away the flimsy homes in its path.

Some 5,000 villagers — half the island's population — are squatting in townships in low-lying areas of the northwest and southeast corners of the small island and four ships are anchored off its shores ready to evacuate villagers if the eruption worsens.

"We're worried but it's still not increasing its activity and remains on level 2," or yellow alert, said local transport operator Simean Tali.

The ships mean "we should get off (the island) if it goes up," he added.

Two hospitals on the island have been emptied of patients, and teams of doctors and nurses are on call to fly to Ambae from the capital, Port Vila, if a major eruption occurs, the National Disaster Management Office said.

"Maybe nothing is going to happen, but it is better to be ready than not," Prime Minister Ham Lini told the Daily Post newspaper this week.

New Zealand vulcanologist Brad Scott, who is on Ambae monitoring the eruption said "it remains a low-level eruption, but it could go either way — worsen or slowly subside."

"At present it's still in steady state," he told The Associated Press.

In a note to local villagers, the vulcanologists said there was "no evidence" the molten magma was swelling or cracking the ground near the lake. There are fears that if the lake bed cracks and water plunges onto the magma it could trigger a massive explosion.

The volcano last erupted in 1995 — nobody was hurt.

At a local school being used as a makeshift shelter, about 100 displaced villagers applauded as local vulcanologist Charlie Douglas told them the "eruption has not worsened in recent days."

The nation's manager of geology hazards, Esline Garae, said Wednesday that a lahar spawned by the eruptions is considered the biggest danger.

Vanuatu, an archipelago of more than 80 islands studded with live and dormant volcanoes, is home to 200,000 people. The country lies 1,400 miles northeast of Sydney, Australia.