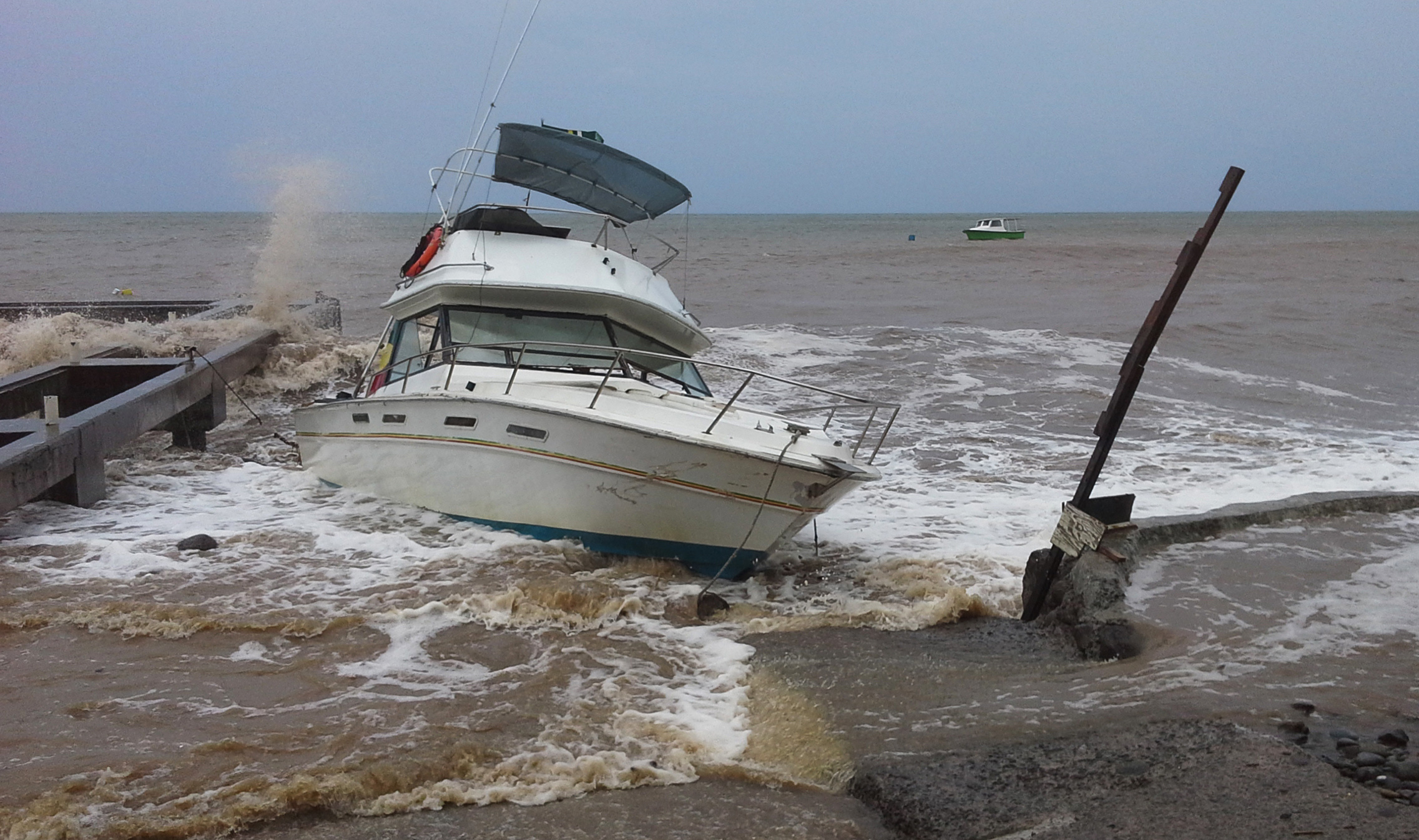 Ian Pinard, the Minister of Public Works and Ports in Dominica, told CBS News that there are at least 20 dead, and more are missing, due to the storm.

Erika was expected to dump up to 12 inches of rain across portions of the drought-stricken northern Caribbean as it carved a path toward the U.S. Florida Governor Rick Scott has declared a state of emergency in every county within the state in preparation for the storm.

The storm could hit the peninsula Monday. Scott made his declaration shortly after forecasters adjusted the trajectory of the storm to show that it's predicted to go through the middle of the state.

The order calls for the activation of the National Guard and gives authorities the ability to waive tolls and rules to allow emergency crews and vehicles to move throughout the state, which hasn't been hit by a hurricane in 10 years.

As of 11 a.m. ET, Erika was located about 65 miles south-southeast of Santo Domingo, Dominican Republic, and was moving west-northwest at 18 mph, according to the U.S. National Hurricane Center in Miami. The storm's maximum sustained winds were at 50 mph.

Authorities in Puerto Rico closed certain roads in anticipation of numerous landslides, while rescue crews fanned across Dominica overnight to search for missing and injured people.

"Erika has really, really visited us with a vengeance," Assistance Police Superintendent Claude Weekes said by phone. "There are many fallen rocks and trees, and water. It's really chaotic."

In Dominica, authorities said an elderly blind man and two children died when a mudslide hit their home in the island's southeast region. Another man was found dead near his home in the capital of Roseau after a mudslide, but the cause of death could not be immediately determined.

Police in the lush and mountainous island of Dominica expected to reach isolated communities via the ocean because of impassable roads and bridges. The Barbados-based Caribbean Disaster and Emergency Management Agency also pledged assistance. Ronald Jackson, the agency's executive director, said in a phone interview that at least two helicopters would arrive early Friday in Dominica carrying supplies and two medics from Trinidad.

"The only way into Dominica at this time is via helicopter," he said.

Erika downed trees and power lines in Dominica as it unleashed heavy floods that swept cars down streets and ripped scaffolding off some buildings.

Garcia said schools and government offices would remain closed on Friday as he warned people to stay indoors.

"We don't want to report any deaths," Garcia said. "Use utmost precaution."

The storm is expected to move near or over the Dominican Republic on Friday as it heads toward the Turks and Caicos Islands and the Bahamas.

Tropical storm warnings were in effect for areas across the Caribbean including Puerto Rico, Vieques, Culebra, the U.S. and British Virgin Islands, the Dominican Republic, Haiti, southeastern and central Bahamas, and Turks and Caicos. A tropical storm watch is in effect for northwestern Bahamas.

Meanwhile in the Pacific, Ignacio strengthened into a hurricane. The storm's maximum sustained winds increased Thursday morning to 90 mph.

Hurricane Ignacio was centered about 890 miles east-southeast of Hilo, Hawaii, and was moving west-northwest near 12 mph.

Also in the Pacific, Jimena strengthened to a hurricane Friday morning with maximum sustained winds of 90 mph. Jimena was centered about 1,075 miles southwest of the southern tip of Mexico's Baja California peninsula.