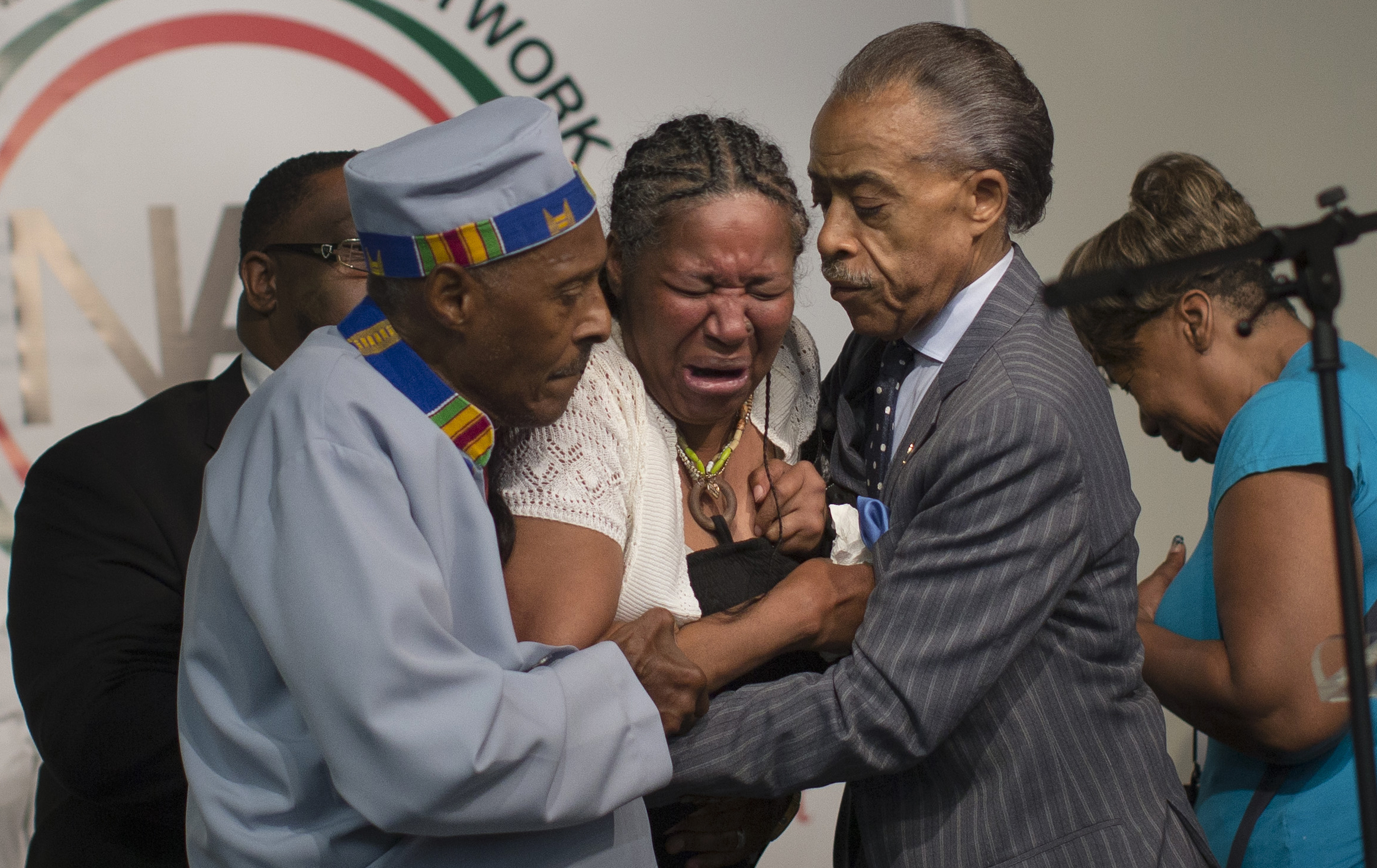 NEW YORK -- The Rev. Al Sharpton held a rally Saturday following the death of a New York City man who died during an arrest in which partial video of the struggle shows an officer placing him in what the police commissioner said appeared to be a choke hold - a tactic prohibited by departmental policy.

CBS New York reports that Sharpton was joined by family members of Eric Garner, 43, at the National Action Network. A second rally was also planned for the Mount Sinai Center for Community Enrichment on Staten Island.

Garner's widow, Esaw Garner, was set to speak at the National Action Network Rally, but found herself too emotional to do so.

Garner, 43, suffered a heart attack during a confrontation with police who were attempting to arrest him on suspicions of selling untaxed cigarettes outside a beauty parlor on Staten Island near the ferry terminal, authorities said.

Two plain-clothes officers confront the 6-foot-3-inch tall, 350-pound man who in turn becomes irate, denying the charges and refusing to be handcuffed when one of the officers places him in what appears to be the choke hold from behind, according video obtained by the New York Daily News.

Garner can be heard complaining repeatedly that he can't breathe as at least four other officers bring him down. He then apparently loses consciousness. The video shows the officer who apparently choked Garner using his hands to push Garner's face into the sidewalk.

"I watched it the same way a family member would watch it, and it was very sad to watch," de Blasio said.

Staten Island prosecutors and detectives from the internal affairs division have opened probes, the mayor said.

More tests are needed to determine Garner's cause and manner of death, a spokeswoman for the medical examiner's office said.

Twenty years ago, police officer Francis Livoti was dismissed from the NYPD and convicted by a federal jury for violating the civil rights of a Bronx man prosecutors said died after Livoti used a choke hold on him in 1994. Livoti has denied he used a choke hold, insisting Anthony Baez died form an asthma attack. But the case remained one of the most high-profile allegations of police brutality in city history.

On Friday, at a makeshift vigil near the spot where Garner died, friends and neighbors gathered to pay their respects - and to vent their anger over what they described as disrespectful and even abusive treatment by the police.

"We need more courtesy and professional respect," said a friend, Jonathan DeGroat, standing near where someone had scrawled "RIP Big E" on the sidewalk. "Justice needs to be served or there will never be peace."

Ramsey Orta, 22, who shot the video posted by the newspaper, told The Associated Press on Friday that Garner had just broken up a fight between two other men when the police approached him, claiming they'd observed him selling loose cigarettes.

"Before they even grabbed him, he told them he wasn't feeling good and that's why I pulled the camera out and started recording," said Orta, adding that Garner was asthmatic.

In the video, a clearly irate Garner shouts that he hasn't done anything wrong.

"Every time you see me, you want to mess with me. I'm tired of it. It stops today," Garner shouts. "I'm minding my business please just leave me alone."

Police Commissioner William Bratton and the mayor have expressed their desire to improve the relationship between officers and the community.