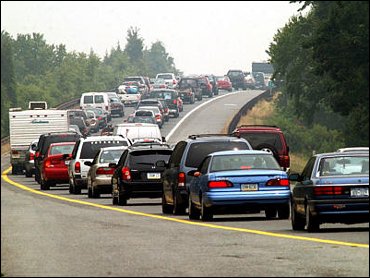 The Environmental Protection Agency on Thursday said it lacked authority to regulate carbon dioxide and other greenhouse gases from motor vehicles.

The agency denied a petition by the International Center for Technology Assessment, a technology watchdog group, and other organizations to impose new controls on vehicles' greenhouse gas emissions blamed for contributing to global warming.

"Congress must provide us with clear legal authority before we can take regulatory action to address a fundamental issue such as climate change," said Jeff Holmstead, EPA's assistant administrator, who heads the Office of Air and Radiation.

"Even if CO2 were an air pollutant generally subject to regulation under the (Clean Air Act), Congress has not authorized the Agency to regulate CO2 emissions," and doing so would infringe on the Department of Transportation's authority to set fuel economy standards, the EPA said in its decision.

"They absolutely did the right thing, they did the only thing they could do," said William Kovacs, a vice president of the U.S. Chamber of Commerce. He echoed the concerns of President Bush, who reversed a campaign pledge to regulate carbon dioxide because he said doing so would harm the U.S. economy by reducing jobs and increasing energy costs.

In defending the decision, the EPA said the federal government was already addressing climate change through several initiatives. All those measures are voluntary.

These include Climate Leaders, a program to get company's to measure and reduce greenhouse emissions; Energy Star, which labels products with data on their energy usage; the Green Power initiative, under which companies buy power from sources that limit environmental damage; and the Smartway program, which targets emissions reductions in the transport industry.

President Bush had also set a goal of reducing greenhouse gas emissions 18 percent over the next ten years.

The trouble, environmentalists say, is that all those programs are voluntary. Mr. Bush has pulled the United States out of the Kyoto Protocol, an international agreement that would have imposed mandatory ceilings on emissions.

Melissa Carey, a climate change policy specialist with Environmental Defense, countered: "Elvis is dead. Climate change is happening. There are certain things we have to come to terms with. It's time to stop the denial and move on with solutions."

This week's decision is only the latest dust-up between the Bush administration and environmentalists.

Earlier this week, the president pushed a controversial plan to allow more logging on federal land, and the EPA published a rule allowing old power plants to escape Clean Air regulations under some circumstances.

Global warming has been a particularly sore point since Mr. Bush exited the Kyoto agreement.

Just this summer, the EPA withheld analyses of proposed air pollution regulations that conflict with the version supported by the White House, a newspaper reported.

According to The New York Times, the agency delayed testing new mercury requirements, declined to analyze a plan for reducing carbon emissions, and released only partial results of its study of another plan. The EPA denies the moves follow any pattern.

Earlier, there was anger that a new 10-year, $103 million federal science research plan had as its top goal the study of "natural variability" in climate change. Environmentalists said that focus ignored the human causes of greenhouse gas emissions and their climate effects.

In a major report on the state of the environment, the EPA reportedly removed sections containing strong language stating that "climate change has global consequences for human health and the environment" and that recent climate change is "likely mostly due to human activities."

Instead, the report merely said that it "does not attempt to address the complexities of this issue."