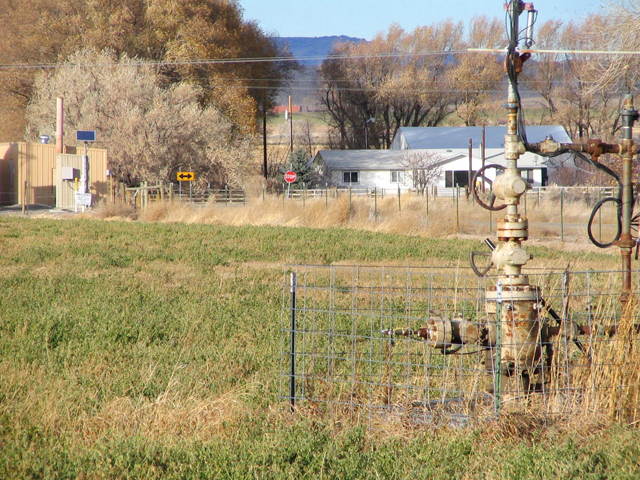 CHEYENNE, Wyo. - The U.S. Environmental Protection Agency announced Thursday for the first time that fracking — a controversial method of improving the productivity of oil and gas wells — may be to blame for causing groundwater pollution.

The draft finding could have significant implications while states try to determine how to regulate the process. Environmentalists characterized the report as a significant development though it met immediate criticism from the oil and gas industry and a U.S. senator.

The practice is called hydraulic fracturing and involves pumping pressurized water, sand and chemicals underground to open fissures and improve the flow of oil or gas to the surface.

The EPA's found that compounds likely associated with fracking chemicals had been detected in the groundwater beneath Pavillion, a small community in central Wyoming where residents say their well water reeks of chemicals. Health officials last year advised them not to drink their water after the EPA found low levels hydrocarbons in their wells.

The EPA announcement could add to the controversy over fracking, which has played a large role in opening up many gas reserves, including the Marcellus Shale in the eastern U.S. in recent years.

The industry has long contended that fracking is safe, but environmentalists and some residents who live near drilling sites say it has poisoned groundwater.

The EPA said its announcement is the first step in a process of opening up its findings for review by the public and other scientists.

"EPA's highest priority remains ensuring that Pavillion residents have access to safe drinking water," said Jim Martin, EPA regional administrator in Denver. "We look forward to having these findings in the draft report informed by a transparent and public review process."

The EPA also emphasized that the findings are specific to the Pavillion area. The agency said the fracking that occurred in Pavillion differed from fracking methods used elsewhere in regions with different geological characteristics.

The fracking occurred below the level of the drinking water aquifer and close to water wells, the EPA said. Elsewhere, drilling is more remote and fracking occurs much deeper than the level of groundwater that would normally be used.

Environmentalists welcomed the news of the EPA report, calling it an important turning point in the fracking debate.

"This is an important first indication there are potential problems with fracking that can impact domestic water wells. It's I think a clarion call to industry to make sure they take a great deal of care in their drilling practices," said Steve Jones with the Wyoming Outdoor Council.

Pavillion resident John Fenton, chairman of the group Pavillion Area Concerned Citizens, applauded the EPA for listening to the homeowners with contaminated water.

"Those of us who suffer the impacts from the unchecked development in our community are extremely happy the contamination source is being identified," Fenton said.

Encana spokesman Doug Hock said there was much to question about the draft study.

The compounds EPA said could be associated with fracking, he said, could have had other origins not related to gas development.

"Those could just have likely been brought about by contamination in their sampling process or construction of their well," Hock said.

The low levels of hydrocarbons found in local water wells likewise haven't been linked to gas development and substances such as methane itself are naturally occurring in the area.

"There are still a lot of questions that need to be answered. This is a probability and it is one we believe is incorrect," Hock said.

Sen. James Inhofe said the study was "not based on sound science but rather on political science."

"Its findings are premature, given that the Agency has not gone through the necessary peer-review process, and there are still serious outstanding questions regarding EPA's data and methodology," the Oklahoma Republican said in a statement.

Wyoming last year became one of the first states to require oil and gas companies to publicly disclose the chemicals used in fracking. Colorado regulators are considering doing the same.

The public and industry representatives packed an 11-hour hearing on the issue in Denver on Monday. They all generally supported the proposal but the sticking point is whether trade secrets would have to be disclosed and how quickly the information would have to be turned over.

And while the EPA emphasized the Wyoming findings we're highly localized, the report is likely to reverberate.

The issue has been highly contentious in New York, where some upstate residents and politicians argue that the gas industry will bring desperately needed jobs while others demand a ban on fracking to protect water supplies. New York regulators haven't issued permits for gas drilling with high-volume hydraulic fracturing in the Marcellus Shale since they began an extensive environmental review in 2008.

Kate Sinding, an attorney with the Natural Resources Defense Council in New York City, said in an e-mail Thursday that the EPA in Wyoming is now recognizing what other experts and families in fracking communities have known for some time: "Fracking poses serious threats to safe drinking water."