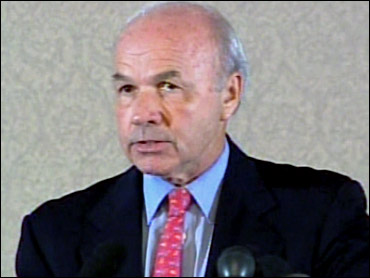 Former Enron Corp. CEO Kenneth Lay pleaded innocent Thursday to federal charges that he was involved in a wide-ranging scheme to deceive the public, company shareholders and government regulators about the energy company that he founded and led to industry prominence before its collapse.

"Not guilty, your honor," Lay, speaking loudly and clearly, told U.S. Magistrate Judge Mary Milloy at a court hearing hours after he surrendered to the FBI and was hustled to the federal courthouse in handcuffs.

It accused Lay of participating in a conspiracy to manipulate Enron's quarterly financial results. It also accused him of making public statements about Enron's financial performance that were false and misleading and omitting facts necessary to make financial statements accurate and fair.

Milloy set his bond at $500,000, and Lay emerged from the courthouse less than an hour later. Prosecutors had sought a $6 million bond, saying he was a flight risk.

"It has been a tragic day for me and my family," Lay said at a news conference shortly after his court appearance. "An indictment came down that should not have occurred."

While repeating his assertion that he took responsibility for Enron's collapse as chairman, "that does not mean I know everything that went on at Enron."

"I continue to grieve as does my family over the loss of the company, my failure to be able to save it," Lay said. "But failure does not equate to a crime.

"I firmly reject any notion that I engaged in any wrongful or criminal activity," he added. "Not only are we ready to go to trial, but we are anxious to prove my innocence."

Lay was allowed to keep his passport because he travels internationally on business, but Milloy said if he left the country he would have to seek permission from the court.
The White House is trying to put at least an arm's length between Mr. Bush and indicted Enron executive Kenneth Lay, a campaign benefactor Mr. Bush nicknamed "Kenny Boy" when the two were up-and-comers in Texas.

It has been "quite some time" since Mr. Bush and Lay talked with each other, White House press secretary Scott McClellan said Thursday, brushing off questions about whether the two were friends.

"He was a supporter in the past and he's someone that I would also point out has certainly supported Democrats and Republicans in the past," McClellan said.

In a separate action, the Securities and Exchange Commission filed civil charges Thursday against Lay, accusing him of fraud and insider trading and seeking recovery of more than $90 million in what the agency said were illegal proceeds from stock sales.

The contents of the criminal indictment, returned Wednesday, were released a few hours after Lay was taken away in handcuffs after surrendering to the FBI Thursday morning.

The indictment of Lay, 62, who also was Enron's chairman, caps an investigation that snared dozens of other employees and executives but took nearly three years to reach the man at the top.

Enron's collapse in late 2001 cost investors billions of dollars, put thousands of Enron employees out of work and wiped out retirement savings for many. The company, once admired, became a symbol of corporate greed and excess, and its fall was followed by a string of scandals at other companies.

Lay entered the packed courtroom and smiled at his wife, Linda, who had driven him before dawn to the Houston FBI headquarters. She rose from her seat to pat him on the back, then was told by a marshal she could have no contact with her husband.

Lay was accompanied by attorney Michael Ramsey. When Milloy asked if Ramsey was his lawyer, Lay drew laughter from spectators by responding: "I think his billings will indicate that I have hired Mr. Ramsey."

The new indictment, now totaling 53 counts, accused Lay, Skilling and Causey of enriching themselves through salaries, bonuses, grants of stock and stock options.

It names Lay in 11 counts: one of conspiracy, two of wire fraud, four of securities fraud, one of bank fraud and three of making false statements to banks. If convicted on all counts, the Justice Department said Lay could receive up to 175 years in prison plus fines possibly totaling more than $5.7 million.

Andrew Weissmann, director of the Justice Department's Enron Task Force, said Thursday that Lay's arrest called to task the "top echelon" of Enron and showed "no one is above the law."

After Skilling's resignation, "Ken Lay took the helm of the criminal scheme," Weissmann said. "Rather than come clean and tell the unvarnished truth about Enron, Lay chose to conceal and distort and mislead at the expense of shareholders and employees, people to whom he owed a duty of complete candor."

But Lay's lawyer Ramsey said before entering the courthouse, "Ken was not in any conspiracy."

Ramsey said he would push for the former Enron chief executive to go to trial ahead of other executives charged in the investigation. He maintains Lay did nothing wrong and cast blame on former chief financial officer Andrew Fastow, who pleaded guilty to two conspiracy counts in January. Fastow admitted to orchestrating partnerships and financial schemes to hide Enron debt and inflate profits while pocketing millions of dollars for himself.

"Andy is obviously a liar and a thief," Ramsey said before entering the courthouse Thursday. "He admits that."

CBS News legal analyst Andrew Cohen said prosecutors will try to have the three men — Skilling, Fastow and Lay — tried together "because they will almost certainly point fingers at each other at trial, which almost always helps the government in these sorts of trials."

Prosecutors have aggressively pursued the one-time celebrity CEO and friend and contributor to President George W. Bush who led Enron's rise to No. 7 in the Fortune 500 and resigned within weeks of its stunning failure. Lay is the 30th and highest-profile individual charged.

The indictment particularly focuses on Lay's behavior after Skilling abruptly resigned in August 2001 before Enron's collapse. Skilling had succeeded Lay as CEO six months earlier. He was indicted in February on nearly three dozen counts of fraud and other crimes.

Prosecutors allege Lay knew Enron was preparing to announce massive third-quarter losses and a $1.2 billion writedown in shareholder equity, yet told Enron employees in a Sept. 26, 2001 Internet chat that he had strongly encouraged management to buy Enron stock.

"Some, including myself, have done so over the last couple of months and others will probably do so in the future," he said. "My personal belief is that Enron stock is an incredible bargain at current prices."

Then on Oct. 12, 2001, he told a credit rating agency that Enron and its auditors had "scrubbed" the company's books and that no additional writedowns would be forthcoming. Four days later, the company announced those big losses, but the shareholder equity writedown was not in Enron's press release.

He also told employees that same day: "Our liquidity is fine; as a matter of fact, it is better than fine, it is strong."

But prosecutors allege Lay knew Enron had been forced to offer its pipelines as collateral to get a $1 billion bank loan to maintain liquidity.

Then on Nov. 12, 2001, in a call to analysts and in another effort to combat bad publicity, he said: "We don't have anything we are trying to hide. I am disclosing everything that we've found."

But prosecutors allege Lay knew that he and other senior Enron managers had not disclosed a litany of negative facts about Enron's finances.

The counts alleging bank fraud accuse Lay of improperly drawing from his lines of credit, and exposing banks to a higher risk of loss, to directly or indirectly buy and carry margin stock.

Skilling succeeded Lay as CEO in February 2001 and resigned abruptly six months later, just weeks before the scandal broke. He was indicted in February on nearly three dozen counts of fraud and other crimes.

Waiting to testify for the prosecution is Fastow, who pleaded guilty to two conspiracy counts in January. Fastow admitted to orchestrating partnerships and financial schemes to hide Enron debt and inflate profits while pocketing millions of dollars for himself.

Enron's collapse was the first of a series of corporate scandals that led to Congress' passage of sweeping reforms to securities laws with the Sarbanes-Oxley Act two years ago. Thousands of Enron's workers lost their jobs, and the stock fell from a high of $90 in August 2000 to just pennies, wiping out many workers' retirement savings.

The company name has continued to splash newswires, recently in a continuing series by CBS News Correspondent Vince Gonzales, who reported on taped conversations between Enron employees implicating the company in California's energy crisis four years ago.