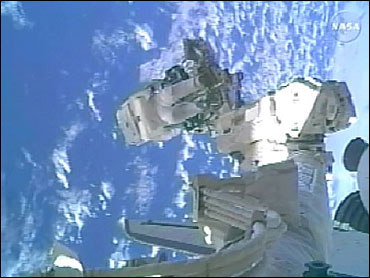 NASA cut short a spacewalk by two astronauts outside the international space station Wednesday after one of them noticed a hole in the outer layer of his glove.

Making a routine inspection of his spacesuit gloves, a recently implemented safety procedure because of damage found after a December shuttle flight, astronaut Rick Mastracchio spotted a small hole in one of the outer layers of his right glove, prompting Mission Control to order him back to the space station's airlock as a precaution, reports CBS News space analyst Bill Harwood.

Mission Control stressed that Mastracchio was in no danger and that the hole did not penetrate all the layers of his glove.

"Doing good," Mastracchio assured Mission Control. "Looking out the hatch, wishing I was out there."

Mastracchio saw the hole more than four hours into what should have been a 6½-hour spacewalk. "The gloves were good. I don't know where that little hole came from," he radioed. He and astronaut Clay Anderson had already completed most of their major spacewalking chores, primarily rearranging equipment; the only thing left undone was the retrieval of some experiments.

Spacewalking astronauts check their gloves every 30 minutes or so to make sure there are no holes or snags. It has been standard procedure ever since last December, when glove damage was discovered after a shuttle flight to the international space station.

NASA, meanwhile, was finishing up tests to determine whether it would have to devote a fourth spacewalk to repairing a gouge in the belly of the shuttle Endeavour. On Tuesday, officials said they were cautiously optimistic that would not be necessary.

A sliver of the wound penetrates through a pair of 1-inch-deep thermal tiles, exposing a thin felt fabric that is the final barrier before the shuttle's aluminum frame.

But thermal analyses have so far shown Endeavour could safely return to Earth as it is, said John Shannon, chairman of the mission management team.

The spacewalk was astronaut Mastracchio's third in five days. He and Anderson, who has been living on the space station since June, were to prepare one of the solar arrays for relocation to another spot on the orbiting outpost during a later mission.

Anderson and Mastracchio were wrapping up the work to upgrade the space station's S-band communications system, adds Harwood.

The Endeavour crew is halfway through its two-week mission to the international space station. The astronauts have completed most of their main goals, including attaching a new truss segment to the space station and replacing a gyroscope that helps control the station's orientation.

Any repairs to Endeavour would be conducted during the shuttle's fourth spacewalk, scheduled for Friday. If more time is needed to prepare, NASA could bump the spacewalk to Saturday and keep the shuttle at the station longer.

The gouge on Endeavour was not considered a threat to the crew, but NASA was debating whether to send astronauts out to fix it in order to avoid time-consuming post-flight repairs.

The hole on the shuttle Columbia was considerably bigger and in a wing, which is exposed to higher temperatures than the 2,000 degrees that scorch the ship's underside during re-entry.

Even though the repair itself would be relatively simple, the astronauts would be wearing 300-pound spacesuits and carrying 150 pounds of tools that could bang into the shuttle and cause more damage. All spacewalks are hazardous, Shannon noted, and so NASA would not want to add more outside work unless it was absolutely necessary.

Engineers are uncertain whether it was foam insulation that came off Endeavour's external fuel tank and struck the shuttle at liftoff, as was the case for Columbia four years ago, or whether the debris was ice or a combination of materials, Shannon said.

The debris weighed less than an ounce, and was 4 inches long, almost 4 inches wide and almost 2 inches deep. It peeled away from a bracket on the tank, fell against a strut lower on the tank, then shot into the shuttle's belly.

These brackets, which hold in place the fuel lines that feed the tank, have shed foam more frequently since shuttle flights resumed following the 2003 Columbia disaster, Shannon said. Engineers speculate more ice could be forming on these brackets because the super-cold fuel is being loaded an hour earlier than before.

NASA is redesigning the brackets, but the new ones will not be ready until next year.

On Tuesday, teacher-astronaut Barbara Morgan carried out the long-postponed dream of an educator turning the space shuttle into a classroom.

Morgan, who was Christa McAuliffe's backup on the Challenger mission, took questions and spoke to hundreds of youngsters on Tuesday. They were packed into the Discovery Center of Idaho in Boise, less than 100 miles from the school where Morgan taught before joining the astronaut corps.

One child wanted to know about exercising in space. In response, Morgan lifted the two large men floating alongside her, one in each hand, and pretended to be straining. Another youngster wanted to see a demonstration of drinking in space. Morgan and her colleagues obliged by squeezing bubbles from a straw in a drink pouch and swallowing the red blobs, which floated everywhere.

Morgan was also asked how being a teacher compared to being an astronaut.