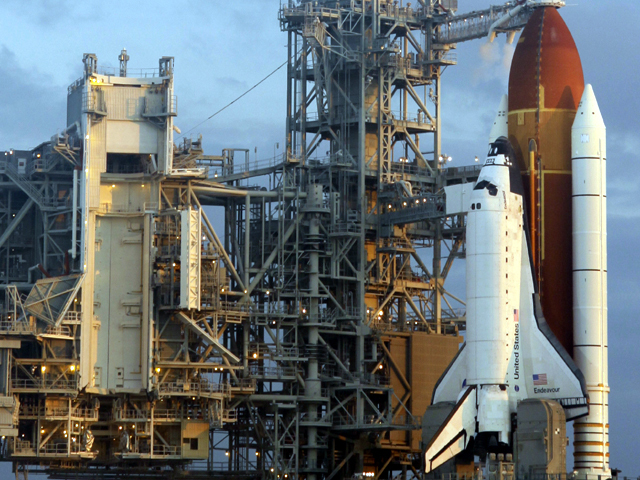 CAPE CANAVERAL, Fla. - NASA fueled Endeavour for a Monday morning liftoff on the next-to-last flight of the space shuttle era, confident an electrical problem that grounded the mission more than two weeks ago had been fixed.

The mission commander is Mark Kelly, the astronaut husband of wounded Arizona Rep. Gabrielle Giffords, who's back for the second launch attempt.

"Who's ready for the best show on Earth?" Giffords' staff said in a Twitter update hours before liftoff.

Kelly and his five crewmates waved, gave a thumbs-up and shook their fists in the air as they headed to the launch pad in the pre-dawn hours. Liftoff was slated for 8:56 a.m.

An electrical problem halted the countdown on April 29; NASA said that trouble is over.

CBS News space consultant William Harwood reports that a short circuit knocked out one set of fuel line heaters used by auxiliary power unit No. 1, one of three that provide the hydraulic power needed to move the ship's engine nozzles and aerosurfaces. The short eventually was traced to damaged insulation and an exposed conductor on a thermostat.

The thermostat was replaced, along with an avionics control box and wiring between the box and the heaters, says Harwood. The system was activated during fueling Monday, when cryogenic propellants flowing through main engine plumbing caused temperatures in the aft engine compartment to drop, and telemetry showed the heaters were operating normally

The mood was upbeat this time around. Meteorologists also were optimistic.

Just two hours before launch time, however, an old patch on a thermal tile near the cockpit hatch came out. Technicians repaired it, and preparations continued.

The astronauts posed for a group picture at the launch pad Monday, before climbing into Endeavour.

"Took my last shower for a few weeks," reported astronaut Mike Fincke in a tweet. "The flight docs gave a good look-over. My only issue: too much boyish enthusiasm. (no known cure)."

Endeavour is bound for the International Space Station one last time before heading to retirement at a Los Angeles museum. The shuttle's experienced, all-male crew will deliver and install a $2 billion particle physics experiment during the 16-day flight, as well as spare station parts.

One final shuttle mission remains, by Atlantis in July.

Going into the weekend, NASA had anticipated a launch day crowd in the hundreds of thousands. Besides the Kennedy Space Center workforce, as many as 45,000 guests were expected at the launch site. Law enforcement agencies told NASA to expect up to 500,000 spectators to jam area roads and towns.

But across the Indian River in Titusville at sunrise, the crowds were thinner than last month's try on a convenient Friday afternoon that even attracted President Obama and his family.

"It's just so dang early in the morning," griped John Stonewall, who charged $20 a car for parking on his empty trailer park. Six cars were parked there at dawn; 70 had squeezed in for the April 29 attempt.

Sisters Anita and Andrea Johnson drove across the state from Tampa for a front-row view.

"We usually stand in our backyard to watch the launches but this time we wanted to see it up close and personal," Anita Johnson said as she pulled lawn chairs out of her car.

To the south toward Cape Canaveral and Cocoa Beach, recreational vehicles and cars already were lined up along the Banana and Indian rivers late Sunday. And signs outside area businesses cheered Endeavour on with messages of "godspeed" and "go."

NASA spent the past two weeks replacing a switch box with a blown fuse as well as a suspect thermostat, and installing new wiring.

Giffords flew in Sunday from Houston, where she's undergoing rehab for a gunshot wound to the head; she was shot at a Jan. 8 political event in her Tucson, Ariz., hometown. Her recovery has been so remarkable that doctors approved both trips to Cape Canaveral.

Endeavour is the baby of NASA's shuttle fleet. It was built to replace the Challenger, lost in a 1986 launch accident. Endeavour first flew in 1992 — it ended its first mission 19 years ago Monday.

NASA is retiring its three remaining space shuttles after 30 years to concentrate on interplanetary travel. The space agency wants to hand over the business of getting crews and cargo to the space station, to private companies. At least one company, Space Exploration Technologies Corp., said it can get astronauts to the space station within three years of getting NASA approval.