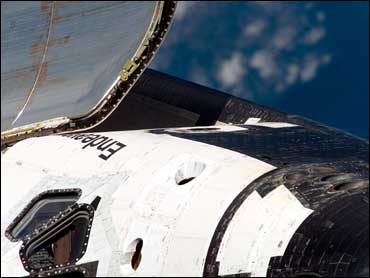 A pair of spacewalking astronauts installed a new beam to the international space station Saturday as engineers back on Earth scrutinized images of a disturbing gouge in shuttle Endeavour's heat shield.

The 3-inch gash in the shuttle's belly will be inspected in greater detail Sunday, when the shuttle crew pulls out its 100-foot robotic arm and extension boom and probes the difficult-to-reach area with lasers. Until then, NASA has only camera and radar images to examine.

Mission managers suspect a chunk of ice flew off Endeavour's external fuel tank one minute after liftoff on Wednesday and struck tiles on the shuttle's underside, near the right main landing gear door. Ice is heavier than the tank's foam insulation, and even a small piece could cause major damage to the shuttle's thermal covering, which protects against the intense heat of atmospheric re-entry at flight's end.

The area where the gouge is located is exposed to as much as 2,300 degrees Fahrenheit during re-entry. Sunday's laser inspection will ascertain exactly how deep the gouge is, then engineers will determine whether repairs are needed.

Columbia was brought down four years ago by a 1½-pound chunk of foam that slammed into the left wing at liftoff and left a hole estimated between 6 inches and 10 inches across. Shuttle wings are especially vulnerable and subjected to even more heat during re-entry.

Work in orbit went on as usual Saturday, a day after the gouge was discovered in zoom-in photos taken by the three-man crew of the space station as Endeavour closed in for docking. Teacher-astronaut Barbara Morgan — Christa McAuliffe's backup for Challenger's doomed flight in 1986 — watched the spacewalk from inside and oversaw the transfer of cargo between the shuttle and station.

Social media and the search for the Boston bombing suspects

On the first spacewalk of the shuttle mission, astronauts Rick Mastracchio and Dave Williams installed a 2-ton square-shaped beam to the backbone of the station, now stretching 246 feet end to end. The beam, or truss, was delivered by Endeavour along with other station equipment that will be hooked up during at least two more spacewalks in coming days.

Astronaut Charles Hobaugh lowered the beam into place, using the space station's robot arm, as Mastracchio and Williams floated nearby, offering guidance. Once the beam was attached to the station, the spacewalkers bolted it down and hooked up grounding straps, then completed some extra outdoor chores.

Midway through the six-hour spacewalk, NASA's main command-and-control computer aboard the space station mysteriously shut down. The backup automatically kicked in, and the third computer went from standby to backup. Mission Control said the problem did not affect the spacewalk or the health of the station.

If NASA determines the gouge in the shuttle's belly — or any other damage to the heat shield — needs to be repaired, the work probably would be done in a fourth spacewalk next Friday or so. The astronauts have a repair kit on board with three types of patching material; the kit has flown on every mission since the 2003 Columbia disaster.

Even with all the improvements to the fuel tank, NASA has readily acknowledged that it is impossible to launch a shuttle with absolutely no threat of debris. Engineers have focused their efforts on preventing large pieces of foam from coming off the tank, an effort that has mostly paid off.

As for ice, technicians have always inspected the fuel tank right before liftoff — the tank is filled with super-cold fuel — but some spots are difficult to see. The chairman of the mission management team, John Shannon, said NASA will review the ice inspection that was carried out before Endeavour took off, to see if anything was missed.

Shannon cautioned Friday that space shuttles have safely returned to Earth with thermal tile damage in the past. Almost every mission if not all in the 26 years of shuttle flight, in fact, has ended with gouges of at least an inch in the thermal tiles that cover the belly. In one flight, nearly 300 dings that big were recorded.

"We have a rich flight history of tile damage, some of which is more significant looking than what we have right here," he told reporters. "In the past, we didn't even know we had damage and we flew back home. So what I would tell you is we're going to do all the work required to understand it ... I would not even venture to guess what the probability is that we would have to go repair this."

NASA hopes to keep Endeavour at the space station for at least seven days and quite possibly a record 10 days. The shuttle is equipped with a new system for drawing power from the station, and mission managers are expected to approve the extra docked days on Sunday.

In an emergency, Shannon said, Endeavour could remain at the space station for at least two months and a rescue shuttle could be launched as early as October.