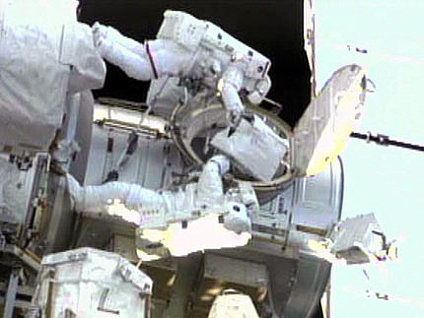 But trouble with bolts holding thermal covers in place on the solar alpha rotary joint mechanism put the crew behind schedule, and in the end only three of the four covers were re-installed.

One was brought back to the airlock for a more detailed examination inside the station.

This was the 157th spacewalk devoted to station assembly and maintenance since construction began in 1998, the sixth so far this year, and the second for the Endeavour astronauts.

A little more than an hour after the spacewalk ended, the crew of the International Space Station held a change-of-command ceremony to mark the departure Monday of Expedition 27 commander Dmitry Kondratyev, Italian astronaut Paolo Nespoli, and NASA astronaut Catherine "Cady" Coleman.

Floating in the Japanese Kibo laboratory module, Kondratyev handed over command to cosmonaut Andrey Borisenko, who will head up the Expedition 28 crew when Kondratyev, Nespoli and Coleman undock in their Soyuz TMA-20 spacecraft Monday evening and head back to Earth to close out a 159-day stay in space.

"Houston, thank you all for great help and support and looking forward to working with you again," Kondratyev radioed after the brief ceremony. "Thanks a lot."

Departing at 5:35 p.m. EDT Monday, Kondratyev plans to back away from the lab complex and then briefly halt while the space station executes a slow turn to set up a one-of-a-kind photo opportunity. Nespoli, working in the Soyuz forward habitation module, plans to capture the only photos and video ever shot showing the space station from a distance with a shuttle attached.