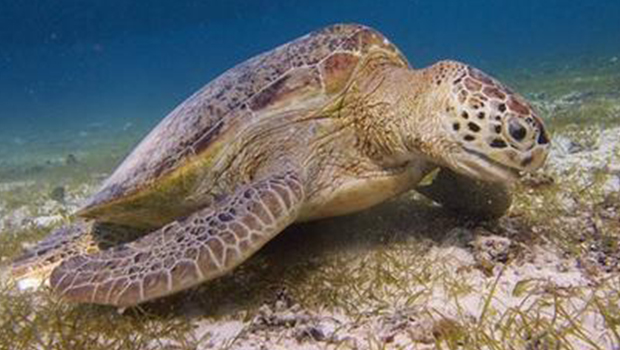 Green sea turtles remain a rare sight in many parts of the world, but one Indonesian island tasked with protecting them is being overrun by far too many.

New research suggests that the gentle endangered creatures are crowding into a marine reserve in numbers never recorded anywhere, gobbling seagrass to the point that they risk destroying the food source that's vital to their survival.

Up to 20 turtles were spotted in an area covering about two U.S. football fields (one hectare) at Derawan Island off Indonesia's part of Borneo in 2011. That means snorkelers are almost guaranteed to see a turtle every moment they're in the water. The rate was four times higher than non-protected areas elsewhere and also topped historic numbers reported before the reptile was hunted by humans.

The graceful creatures with heart-shaped shells usually just munch on seagrass much like cows grazing in a field. But the increasing population has pushed them to desperation: With no top leaves left, they now claw at the plants with their flippers and use their mouths to violently rip the seagrass out by the roots, leaving patches of white sandy ocean floor. Such behavior has not been seen elsewhere, according to findings published last week in the journal Proceedings of the Royal Society B.

They are "creating sort of piles of mud in the seagrass bed where they've eaten the underlying root matter, and it can take a hell of a long time for that to come back," said co-author Peter Mumby, a marine ecologist at the University of Queensland in Australia. "So essentially, they're going to eat themselves out of house and home."

Using modeling, the research team, led from 2008 to 2011 by Marjolijn Christianen of Radboud University Nijmegen in the Netherlands, found that nearly all turtles would need to be removed from the area in order for the seagrass to recover. If they are not stopped, the beds could be destroyed within the next five to 10 years, the study suggests.

Mumby said a short-term solution may be to try to relocate the turtles to less populated reserves, but he added that larger conservation issues must be addressed by the government. Pesticide, fertilizer and sediment runoff from nearby mining and agriculture operations, including rapidly expanded palm oil plantations, are smothering seagrass beds in areas outside the decade-old reserve. The turtles are also congregating in the protected area for safety because they are being poached outside. The heavy hunting of sharks, a major turtle predator, could be another factor contributing to the rising numbers.

Many of the turtles feeding off Derawan do not nest there and instead come from outside areas including Malaysia and the Philippines, said Windia Adnyana, a turtle expert from Udayana University in Bali who has worked for years in the marine reserve. And while there are more turtles coming to eat, he said the number nesting on the island continues to decline with an estimated 10,000 turtles returning to the beach where they were born every year.

"It's alarming in a place like Derawan," he said. "Protecting the species alone is not enough. There has to be consideration about the capacity of the food itself, the seagrass."

Seagrass is part of an important ecosystem, providing food, shelter and nurseries for different types of fish, mammals and invertebrates. It helps maintain the health of coral reefs, mangroves and marshes, while also preventing erosion and keeping water clear by trapping sediment coming from land.

A 2011 global survey found that 14 percent of all seagrass species are at risk of going extinct, largely due to pollution, coastal development, deforestation, sedimentation, sewage runoff and dredging.

Green turtles are classified as endangered on the International Union for Conservation of Nature's Red List of Threatened Species.