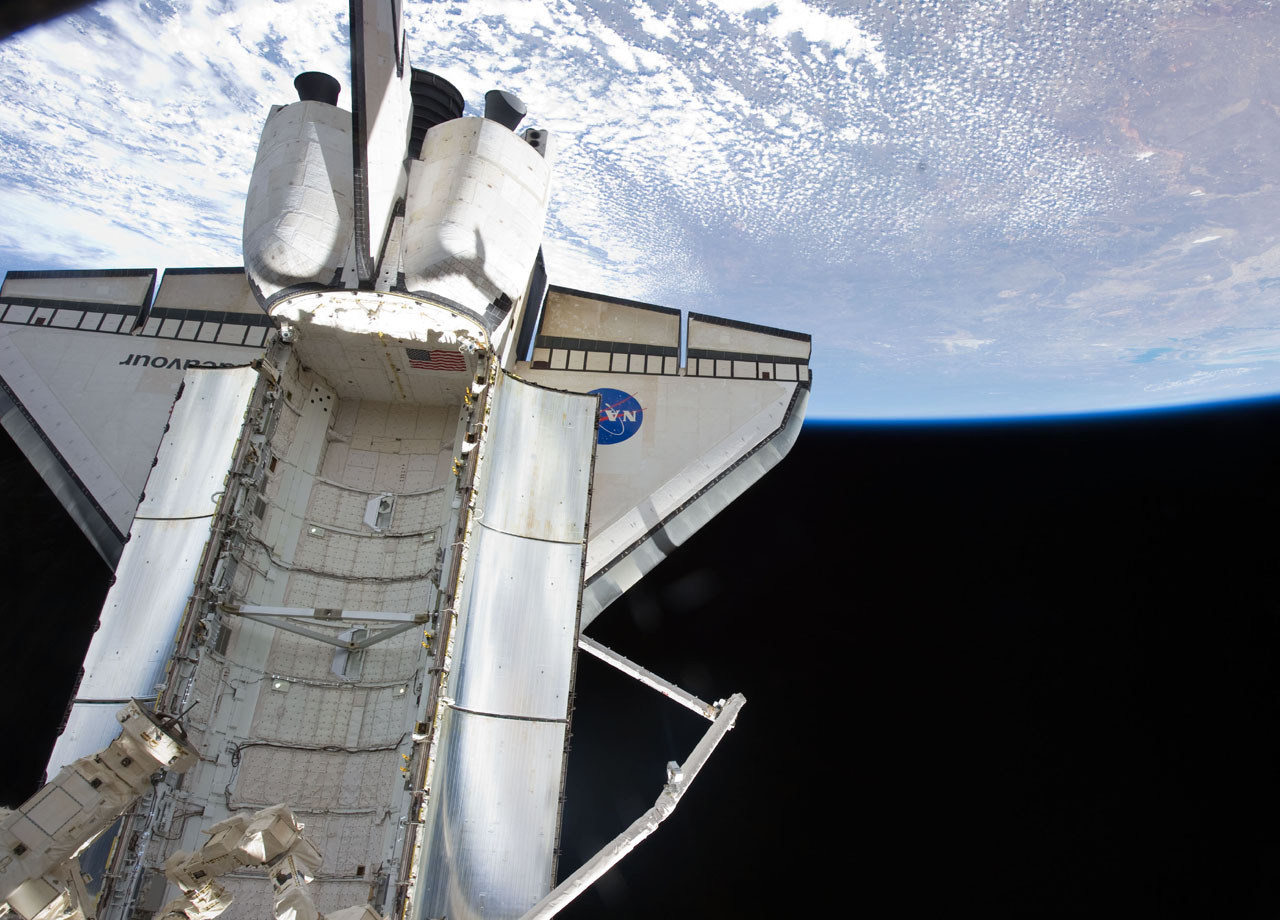 The Space Shuttle Endeavour is scheduled to remain up in orbit until Wednesday. As for America's manned space program as a whole, that remains up in the air, with Atlantis due to make the very last shuttle flight early this summer. Our Cover Story marking the end of an era is reported by David Pogue of The New York Times:

NASA does all kinds of stuff. They build space robots. They send up satellites. They study the oceans.

But come on - who're we kidding? When most people think of NASA, they think of manned space flight. The space shuttle.

But after 30 years, and 135 flights, NASA has decided to close down the space shuttle program.

The Shuttle is an amazing machine. It takes off like a rocket, but lands like a plane, so it's re-usable. It's had some spectacular successes. It carried the Hubble Space Telescope into orbit, letting us see millions of times farther into space than we ever could before.

Photos: The final flight of Endeavour

And the shuttle built the International Space Station, hunk by hunk, made possible by its huge cargo bay, its airlock, and its robotic arm.

It launched the first American female astronaut into space, and the first black astronauts.

The shuttle became a fixture of pop culture. A movie star!

But the space shuttle has also developed a reputation for technical problems. Originally, it was supposed to fly dozens of times a year, and cheaply.

William Gerstenmaier has been with NASA since 1977. Today, he's in charge of the shuttle and the space station. "I think we may have over-sold in the beginning, the reusability, and how easy it would be to get into space," he said.

"Things that we thought - we would just get it back, just turn it right around and go fly - it turned out we got it back, and we had to go do a lot of inspection in-between. And that increased the cost a little bit from what we were originally projecting."

The shuttle isn't some mass-produced SUV. Each one is basically hand-built from hundreds of complex, custom-made parts. That's one reason the shuttle is so finicky.

I learned that first-hand, back on April 29, when I joined about 700,000 other people to witness the Endeavor's final liftoff.

Everything seemed to be picture perfect ... we were all psyched for that historic moment ...

Then two hours before blastoff, NASA discovered a glitch, and delayed the launch for two weeks. Turned out to be a tiny blown fuse.

The Shuttle's complexity was also responsible for its two far more traumatic failures: the Challenger disaster in 1986, and the disintegration of the Columbia in 2003 - terrible accidents that killed everyone on board.

But for better or worse, in good times and bad, the shuttle was a symbol of American technical superiority, the unmistakable icon of a nation on the rise.

It's sad to see that era end.

But NASA's William Gerstenmaier says the shuttle isn't ending because we've lost our mojo. It's because the next missions require different designs to go into deeper space, like the Orion capsule that NASA just unveiled .

"We need more of a smaller capsule that can take that heat, of coming back from those larger destinations with a higher re-entry velocity," he told Pogue. "So we need a smaller, more compact vehicle than the winged vehicle we have today."

In the meantime, we're still supposed to be doing research on the International Space Station.

"We're gonna use the Soyuz spacecraft, which we've been actually using for crew rotations for about the last two years," said Gerstenmaier. That's right: We're renting seats from the Russians.

Charles Bolden was an astronaut on four missions, including 1990 deployment of the Hubble Space Telescope. "Now, you talk about thrilling missions!" he said.

Today, he is the head of NASA.

"I'm going to outsource access, the provision of access to the International Space Station while I take NASA's funding and I go explore," he said.

Aqs a backup to our Russian rides, NASA has hired commercial spacecraft companies to build a space shuttle replacement, so NASA can focus on more ambitious missions.

"We could conceivably put a human on the surface of Mars in 2030," Bolden said. "The president has told us he wants us to rendezvous with and put astronauts in the vicinity of an asteroid in 2025."

Still, as the shuttle retires, NASA's manned space program is at a crossroads.

"The commercial cargo delivery systems are not yet ready; commercial crew vehicles are several years, even farther away," said Scott Pace, who used to work for NASA. Now he's the director of the Space Policy Institute at George Washington University.

Pace isn't sure NASA will ever send another manned rocket into space.

"There may not be one," Pace said. "It may be one where NASA simply buys commercial launch services, or it may be that NASA decides that it really does need to have a government-owned and operated vehicle. You know, the existence of commercial airline services does not mean we don't have military cargo transports. We have both. And we use each as appropriate."

There were three working Space Shuttles. The Atlantis is set for its final flight in July. The Endeavor is in space right now, on its final mission; it lands on Wednesday for the last time.

Discovery lifted off for the final time in February. Right now it's being dismantled.

"They're in the process of 'safetying' the vehicle, as they call it," said Bill Harwood, a CBS News space analyst for the past 20 years. "It's really decommissioning it, getting rid of toxic propellants, taking all the explosive bolts off there, all the toxic things, and ship them off to museums."

"It didn't deliver on the political promise of 25 flights a year that was promised. But it was a magnificent vehicle, and I think everyone's going to miss it when it's gone," he said.

NASA's William Gerstenmaier said, "Intellectually, I think we've been knowing this end is coming. But I think emotionally it's still tough, as each vehicle kind of retires."

"Yeah, it'll be emotional," said NASA Administrator Bolden. "But it's necessary. And what tempers the emotion is the emotion of joy that I feel, because like I said, we're being given a very, very, very rare opportunity to make this nation again be the leader of human exploration beyond lower-Earth orbit.

"I cannot believe that when given this choice, the American public won't say, 'Hey I want to be a part of that. I want to be living when humans once again travel beyond lower-Earth orbit. I want my kids to see what I saw.' I'll cry -

"In 1969 when humans walked on the moon," Bolden said, getting emotional. "I want my granddaughters to see another human go to another heavenly body. So, yeah, you know, I get emotional about that, and I apologize."

"I totally understand. I do, too," said Pogue.

And maybe THAT's why, when the Endeavor was FINALLY fixed up and cleared for its last takeoff two weeks ago, suddenly all the delays and the glitches didn't seem to matter.

So the space shuttle may not be technologically necessary anymore. But it had a huge symbolic value, a poetic patriotic value, and it's sad to see it end.

Now NASA will retool. It hopes to go where the space shuttle was built to go, onward and upward ...