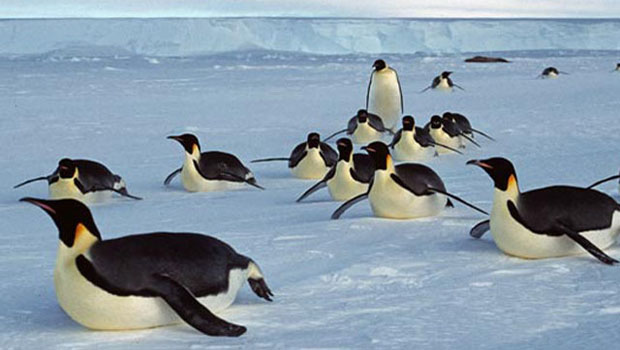 Researchers have long thought that emperor penguins were philopatric, meaning that they return to the same location each year to nest. New research -- using satellite imagery of the Antarctic -- shows that penguins may not be so faithful after all.

The new study, led by University of Minnesota researcher Michelle LaRue, may offer new insight into the long-term survival for the species by showing that the emperor penguins can adapt to their changing environment better than expected.

In the 1970s, over a five-year period, the colony's penguin population declined by half while Southern Ocean temperatures rose. Birds that were banded by the researchers and studied year after year seemed to have disappeared. This was initially thought to be due to warming temperatures diminishing their survival rates.

However, satellite imagery has offered another possible explanation. Before the use of satellite imagery, researchers believed that Pointe Géologie was isolated, but clues in the satellite images indicated there were in fact other colonies within travel distance for the penguins. New colonies are also being formed, according to LaRue.

Presenting the study at the IDEACITY conference in Toronto last week, LaRue noted there were other colonies that were also appearing and disappearing. So, she asks, if these birds are supposed to be coming back to the same location each year and other colonies are experiencing similar patterns, where are these birds coming from? Thus, LaRue says that perhaps philopatry may not represent the mating habits of emperor penguins after all.

"It's possible that birds have moved away from Pointe Géologie to these other spots and that means that maybe those banded birds didn't die," LaRue said. "If we want to accurately conserve the species, we really need to know the basics. We've just learned something unexpected, and we should rethink how we interpret colony fluctuations."

The study will be published in an upcoming edition of the scientific journal Ecography.

This state leads the nation in UFO sightings
Thanks for reading CBS NEWS.
Create your free account or log in
for more features.
View CBS News In
CBS News App Open
Chrome Safari Continue
Be the first to know
Get browser notifications for breaking news, live events, and exclusive reporting.