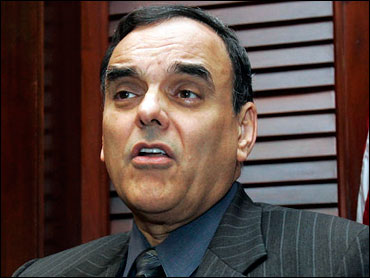 The director of the National Hurricane Center was reassigned Monday, four days after many of the center's employees called for his removal because of his comments about an aging weather satellite.

CBS News correspondent Kelly Cobiella reported that half of the center's usually mild-mannered staff of 46 rose up in revolt against new director Bill Proenza last week, signing their names to a statement urging the Commerce Department to replace him and saying "the effective functioning of the national hurricane center is at stake." The list includes four of the five senior hurricane forecasters — and Proenza's own secretary.

They said Proenza had undermined the public's confidence in the center by exaggerating the forecasting problems scientists would face if the satellite failed.

Proenza insisted he was only trying to ensure that his forecasters had the best tools and adequate support. He did not immediately return a message left on his cell phone by The Associated Press.

"The staff is very focused on the 2007 Atlantic hurricane season and everybody's ready to move forward," Feltgen said.

Anson Franklin, a spokesman for the National Oceanic and Atmospheric Administration, which oversees the center, said Proenza is still a NOAA employee. But he would not provide details about Proenza's status, citing privacy laws.

Rappaport declined to comment on his appointment. In November, he took himself out of the running to replace Mayfield, saying he could not make the commitment for personal reasons.

Rappaport has been with the hurricane center since 1987. He was appointed deputy director in 2000.